From WikiMD
(Redirected from 47,XYY syndrome)
Jump to navigation Jump to search
Share

47,XYY syndrome is characterized by an extra copy of the Y chromosome in each of a male's cells. Although many males with this condition are taller than average, the chromosomal change sometimes causes no unusual physical features. Most males with 47,XYY syndrome have normal production of the male sex hormone testosterone and normal sexual development, and they are usually able to father children. 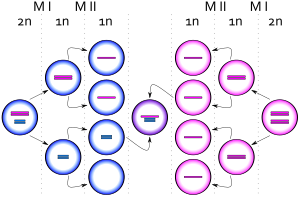 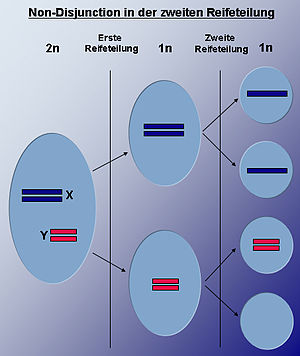 This condition occurs in about 1 in 1,000 newborn boys. Five to 10 boys with 47,XYY syndrome are born in the United States each day. Many affected males are never diagnosed or not diagnosed until later in life.

Some males with 47,XYY syndrome have an extra Y chromosome in only some of their cells. This phenomenon is called 46,XY/47,XYY mosaicism.

Most cases of 47,XYY syndrome are not inherited. The chromosomal change usually occurs as a random event during the formation of sperm cells. An error in cell division called nondisjunction can result in sperm cells with an extra copy of the Y chromosome. If one of these atypical reproductive cells contributes to the genetic makeup of a child, the child will have an extra Y chromosome in each of the body's cells.

Other signs and symptoms of 47, XYY syndrome may include asthma, dental problems, and acne. Boys with the syndrome don’t typically have physical features different from most people, but they may be taller than expected. These boys are not expected to have differences in the appearance of the sex organs (genitalia).

Most boys with 47, XYY syndrome go through normal sexual development, and fertility is expected to be normal. However, some boys with the syndrome may develop testicular failure (when the testes can’t produce sperm or testosterone), which can lead to problems with fertility.

47, XYY syndrome may be suspected when a doctor observes signs and symptoms that can be associated with the syndrome such as low muscle tone (hypotonia), speech delay, or learning problems in school. A doctor may then order testing to see if there is a genetic explanation for the signs and symptoms. Tests that may be ordered include: Karyotype: a test that is used to view all the chromosomes in a cell Chromosomal microarray: a test that looks for extra or missing chromosomes or pieces of chromosomes In some cases, 47, XYY syndrome may be suspected prenatally based on routine screening tests. A diagnosis can be confirmed with prenatal tests such as an amniocentesis or chorionic villus sampling (CVS). It is thought that some people who have 47, XYY syndrome are never diagnosed because they do not have severe signs or symptoms of the syndrome.

Boys with 47, XYY syndrome may be in special education at school, or they may have extra help in some classes. Other management options for boys with 47, XYY syndrome may include behavioral therapy or medications for boys with attention deficit hyperactivity disorder (ADHD) or behavioral problems. If autism spectrum disorder is present, applied behavioral analysis (ABA) therapy may be recommended. In some cases, hormonal therapy may be used.

The long-term outlook for people with 47, XYY is typically good. Boys with this syndrome can do well both in school and in building social relationships. Men with 47, XYY syndrome can also have successful careers and families of their own.Therapies and other management for the syndrome can be important in allowing affected males to reach their full potentials.

47, XYY syndrome is a rare disease.

Join WikiMD as a freelancer or paid editor and help improve the page 47, XYY syndrome or others.
Retrieved from "http://www.wikimd.org/wiki/index.php?title=47,_XYY_syndrome&oldid=2099418"
Categories: