5q minus (5q-) syndrome is a type of bone marrow disorder called myelodysplastic syndrome (MDS). MDS comprises a group of conditions in which immature blood cells fail to develop normally, resulting in too many immature cells and too few normal mature blood cells.

In 5q- syndrome, development of red blood cells is particularly affected, leading to a shortage of these cells (anemia). In addition, the red blood cells that are present are unusually large (macrocytic).

MDS is considered a slow-growing (chronic) blood cancer. It can progress to a fast-growing blood cancer called acute myeloid leukemia (AML). Progression to AML occurs less commonly in people with 5q- syndrome than in those with other forms of MDS. 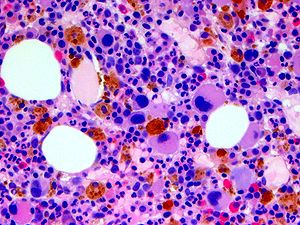 MDS affects nearly 1 in 20,000 people in the United States. It is thought that 5q- syndrome accounts for 15 percent of MDS cases. Unlike other forms of MDS, which occur more frequently in men than women, 5q- syndrome is more than twice as common in women.

5q- syndrome is caused by deletion of a region of DNA from the long (q) arm of chromosome 5. Most people with 5q- syndrome are missing a sequence of about 1.5 million DNA building blocks (base pairs), also written as 1.5 megabases (Mb). However, the size of the deleted region varies. This deletion occurs in immature blood cells during a person's lifetime and affects one of the two copies of chromosome 5 in each cell.

The commonly deleted region of DNA contains 40 genes, many of which play a critical role in normal blood cell development. Research suggests that loss of multiple genes in this region contributes to the features of 5q- syndrome. Loss of the RPS14 gene leads to the problems with red blood cell development characteristic of 5q- syndrome, and loss of MIR145 or MIR146A contributes to the megakaryocyte and platelet abnormalities and may promote the overgrowth of immature cells. Scientists are still determining how the loss of other genes in the deleted region might be involved in the features of 5q- syndrome.

This condition is generally not inherited but arises from a mutation in the body's cells that occurs after conception. This alteration is called a somatic mutation. Affected people typically have no history of the disorder in their family.

above test are used for diagnosis

Lenalidomide has activity in 5q- syndrome and is FDA approved for red blood cell (RBC) transfusion-dependent anemia due to low or intermediate-1 (int-1) risk myelodysplastic syndrome (MDS) associated with chromosome 5q deletion with or without additional cytogenetic abnormalities.There are several possible mechanisms that link the haploinsufficiency molecular lesions with lenalidomide sensitivity.

Most affected people have a stable clinical course but are often transfusion dependent.

5q- syndrome is a rare disease.

Join WikiMD as a freelancer or paid editor and help improve the page 5q- syndrome or others.
Retrieved from "http://www.wikimd.org/wiki/index.php?title=5q-_syndrome&oldid=2080833"
Categories: