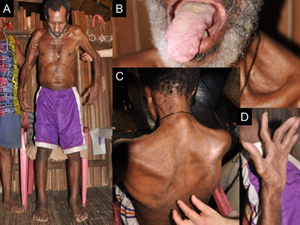 Our voluntary muscles produce movements like walking, breathing, chewing, and talking.  Nerve cells called motor neurons--that connect from the brain and spinal cord to the rest of the body--begin to degenerate and die, and stop sending messages to muscles. The muscles gradually weaken, waste away, and twitch, and the brain can't start and control voluntary movement.

Symptoms are usually first noticed in the arms and hands, legs, or swallowing muscles.  People with ALS lose their strength and become unable to move their arms and legs, and to hold the body upright.  Some individuals eventually can't breathe on their own.  Although ALS doesn't usually impair a person's mind or personality, several recent studies suggest that some people with ALS may develop cognitive problems involving word fluency, decision-making, and memory.

Most cases of ALS happen with no known cause, while a small percentage of cases are inherited. 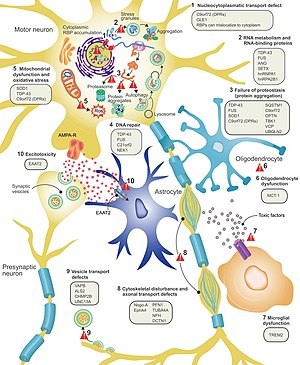 No cure has yet been found for ALS. However, the drugs riluzole and edaravone have approved by the Food and Drug Administration (FDA) to treat ALS. Riluzole prolongs life by 2-3 months but does not relieve symptoms.

Edaravone can slow the clinical decline in daily functioning  of people with ALS. The FDA has also approved the NeuRx Diaphragm Pacing System, which uses implanted electrodes and a battery pack to cause the diaphragm (breathing muscle) to contract, to help certain individuals who have ALS before the onset of severe respiratory failure. Other treatments are desig ned to relieve symptoms and improve the quality of life for people with ALS.

Regardless of the part of the body first affected by the disease, muscle weakness and atrophy spread to other parts of the body as the disease progresses.  Individuals have increasing problems with moving, swallowing, and speaking or forming words.  Eventually people with ALS will not be able to stand or walk, get in or out of bed on their own, or use their hands and arms. In later stages of the disease, individuals have difficulty breathing as the muscles of the respiratory system weaken. Although ventilation support can ease problems with breathing and prolong survival, it does not affect the progression of ALS. Most people with ALS die from respiratory failure, usually within 3 to 5 years from the onset of symptoms. However, about 10 percent of those individuals with ALS survive for 10 or more years.

^Amyotrophic lateral sclerosis (article) is provided for informational purposes only. No expressed or implied warranties as to the validity of content.
WikiMD is not a substitute for professional advice. By accessing and using WikiMD you agree to the terms of use.
Templates etc. when imported from Wikipedia, are licensed under CC BY-SA 3.0. See full disclaimers.
Retrieved from "http://www.wikimd.org/wiki/index.php?title=Amyotrophic_lateral_sclerosis&oldid=2035354#Genetics"
Categories: