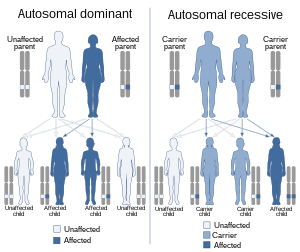 At least some cases of Aagenaes syndrome have been attributed to mutations in the LSC1 gene on chromosome 15q.

This condition is inherited in an autosomal recessive manner and is found mainly in individuals of Norwegian descent.

It is named after Øystein Aagenæs, a Norwegian paediatrician.It is also called cholestasis-lymphedema syndrome (CLS)

This table lists symptoms that people with this disease may have. For most diseases, symptoms will vary from person to person. A common feature of the condition is a generalised lymphatic anomaly, which may be indicative of the defect being lymphangiogenetic in origin.

It is diagnosed through genetic testing to demonstrate mutations in LSC1 gene on chromosome 15q.

There is no cure and treatment is supportive care.

Aagenaes syndrome is a rare disease.

Join WikiMD as a freelancer or paid editor and help improve the page Aagenaes syndrome or others.
Retrieved from "http://www.wikimd.org/wiki/index.php?title=Aagenaes_syndrome&oldid=2158124"
Categories: