Clinical use of Abatacept

For the management of the signs and symptoms of moderate-to-severe active rheumatoid arthritis, inducing major clinical response, slowing the progression of structural damage, and improving physical function in adult patients.

It is indicated both as a monotherapy and for use in combination with a continued regimen of DMARDs (not including TNF antagonists).

Also used for the management of the signs and symptoms of moderately to severely active polyarticular juvenile idiopathic arthritis in children.

Abatacept is the first in a new class of drugs known as Selective Co-stimulation Modulators.

How does it work in RA?

Binding of CTLA4-Ig to CD80/86 provides a negative feedback mechanism which results in T-cell deactivation. 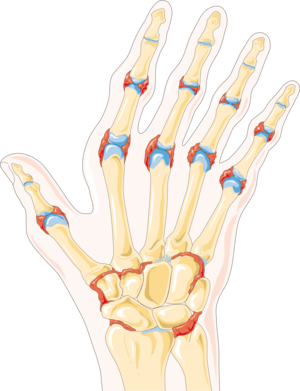 Abatacept is marketed as Orencia in the United States and other countries.

Mechanism of action of Abatacept

Abatacept was developed by Bristol-Myers-Squibb and is licensed in the US for the treatment of Rheumatoid arthritis in the case of inadequate response to anti-TNF-alpha therapy.

The annual drug cost is estimated to be about $18,663 per patient in the United States.

This WikiMD article Abatacept is a stub. If you are familiar with the topic Abatacept, you can help us. Paid editors welcome!

^Abatacept (article) is provided for informational purposes only. No expressed or implied warranties as to the validity of content.
WikiMD is not a substitute for professional advice. By accessing and using WikiMD you agree to the terms of use.
Templates etc. when imported from Wikipedia, are licensed under CC BY-SA 3.0. See full disclaimers.
Retrieved from "http://www.wikimd.org/wiki/index.php?title=Abatacept&oldid=2158199"
Categories: