Abdominal compartment syndrome (ACS) occurs when the abdomen becomes subject to increased pressure reaching past the point of intra-abdominal hypertension (IAH). ACS is present when intra-abdominal pressure rises and is sustained at > 20 mmHg and there is new organ dysfunction or failure.

The underlying cause of the disease process is capillary permeability caused by the systemic inflammatory response syndrome (SIRS) that occurs in every critically ill patient. SIRS leads to leakage of fluid out of the capillary beds into the interstitial space in the entire body with a profound amount of this fluid leaking into the gut wall, mesentery and retroperitoneal tissue. 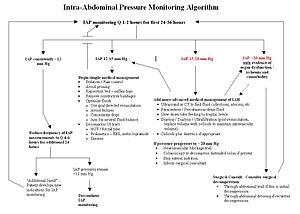 Portions of content adapted from Wikipedia's article on Abdominal compartment syndrome which is released under the CC BY-SA 3.0.

^Abdominal compartment syndrome (article) is provided for informational purposes only. No expressed or implied warranties as to the validity of content.
WikiMD is not a substitute for professional advice. By accessing and using WikiMD you agree to the terms of use.
Templates etc. when imported from Wikipedia, are licensed under CC BY-SA 3.0. See full disclaimers.
Retrieved from "http://www.wikimd.org/wiki/index.php?title=Abdominal_compartment_syndrome&oldid=2158256"
Categories: