The aberrant right subclavian artery frequently arises from a dilated segment of the proximal descending aorta, the so-called Diverticulum of Kommerell (which was named for the German Radiologist, Burkhard Friedrich Kommerell (1901–1990), who discovered it in 1936).[5][6] It is alternatively known as a lusorian artery.[1][3] 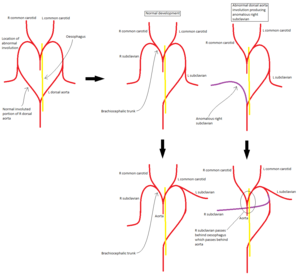 The embryological basis of the retroesophageal aberrant right subclavian artery

Surgery is occasionally used to treat the condition.[7]

^Aberrant subclavian artery (article) is provided for informational purposes only. No expressed or implied warranties as to the validity of content.
WikiMD is not a substitute for professional advice. By accessing and using WikiMD you agree to the terms of use.
Templates etc. when imported from Wikipedia, are licensed under CC BY-SA 3.0. See full disclaimers.
Retrieved from "http://www.wikimd.org/wiki/index.php?title=Aberrant_subclavian_artery&oldid=2162689"
Categories: