Poliomyelitis is an infectious disease caused by a virus; usually causes only mild symptoms but in rare cases can attack the brain and spinal cord and cause paralysis or death

Poliomyelitis is a viral disease that can affect nerves and can lead to partial or full paralysis. It is caused by infection with the poliovirus which can be spread by direct person-to-person contact, by contact with infected mucus or phlegm from the nose or mouth, or by contact with infected feces. There are three basic patterns of polio infection: subclinical infections, nonparalytic, and paralytic.

Symptoms vary based on the pattern of infection and can range from asymptomatic with subclinical poliomyelitis to partial or full paralysis. Treatment is aimed at controlling symptoms while the infection runs its course. Since the development of the polio vaccine, the incidence of the disease has been greatly reduced. The prognosis depends on the form of the disease (subclinical, nonparalytic, or paralytic) and the site affected.

Post-polio syndrome (PPS) is a condition that can affect polio survivors decades after they recover from their initial poliovirus infection. Most people who get infected with poliovirus (about 72 out of 100) will not have any visible symptoms.

About 1 out of 4 people with poliovirus infection will have flu-like symptoms that may include:

These symptoms usually last 2 to 5 days, then go away on their own.

Note that “poliomyelitis” (or “polio” for short) is defined as the paralytic disease. So only people with the paralytic infection are considered to have the disease. 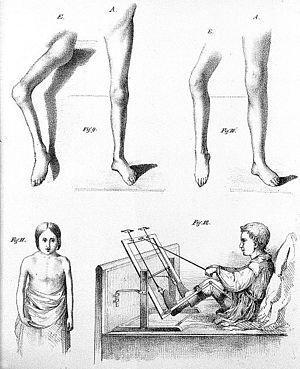 You can get infected with poliovirus if: You have feces on your hands, and you touch your mouth. You put in your mouth objects like toys that are contaminated with feces. An infected person may spread the virus to others immediately before and up to 2 weeks after symptoms appear. The virus can live in an infected person’s feces for many weeks. It can contaminate food and water in unsanitary conditions. People who don’t have symptoms can still pass the virus to others and make them sick.

There are two types of vaccine that can prevent polio:

Inactivated poliovirus vaccine (IPV) given as an injection in the leg or arm, depending on the patient’s age. Only IPV has been used in the United States since 2000.

Oral poliovirus vaccine (OPV) is still used throughout much of the world.

Polio vaccine protects children by preparing their bodies to fight the poliovirus. Almost all children (99 children out of 100) who get all the recommended doses of the inactivated polio vaccine will be protected from polio.

Poliovirus can be detected in specimens from the throat, feces (stool), and occasionally cerebrospinal fluid (CSF) by isolating the virus in cell culture or by detecting the virus by polymerase chain reaction (PCR).

To increase the probability of isolating poliovirus, collect at least two stool specimens 24 hours apart from patients with suspected poliomyelitis. These should be collected as early in the course of disease as possible (ideally within 14 days after onset).

Partial genome sequencing is used to confirm the poliovirus genotype and determine its likely geographic origin.

Detection of poliovirus in CSF is uncommon. CSF usually contains an increased number of leukocytes [from 10 to 200 cells/mm3 (primarily lymphocytes)] and a mildly elevated protein (from 40 to 50 mg/dL). These findings are nonspecific and may result from a variety of infectious and noninfectious conditions.

^Poliomyelitis (article) is provided for informational purposes only. No expressed or implied warranties as to the validity of content.
WikiMD is not a substitute for professional advice. By accessing and using WikiMD you agree to the terms of use.
Templates etc. when imported from Wikipedia, are licensed under CC BY-SA 3.0. See full disclaimers.
Retrieved from "http://www.wikimd.org/wiki/index.php?title=Poliomyelitis&oldid=2053764"
Categories: