Aspergillosis refers to a fungal disease or infection caused by the fungi Aspergillus. Aspergillus may be a common flora which will be found in indoor and outside environments. the general public may be exposed to the spores each day while not being affected. Aspergillosis typically happens in folks with respiratory system diseases or weakened immune systems. The spectrum of health problems caused by aspergillus include allergies, respiratory infections, and infections in other systems or organs. 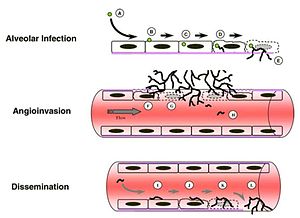 This infection usually affects people with weakened immune systems due to cancer , AIDS, leukemia,organ  transplantation,chemotherapy , or other conditions or events that reduce the number of normal white blood cells . In this condition, the fungus invades and damages tissues in the body

There are several different kinds of aspergillosis.

One kind is allergic bronchopulmonary aspergillosis (also called ABPA), a condition where the fungus causes allergic respiratory symptoms similar to asthma, such as wheezing and coughing, but does not actually invade and destroy .

Aspergilloma, a growth (fungus ball) that develops in an area of previous lung disease such as tuberculosis or lung abscess, is a third kind of aspergillosis

This type of aspergillosis is composed of a tangled mass of fungus fibers, blood clots, and white blood cells . The fungus ball gradually enlarges, destroying lung tissue in the process, but usually does not spread to other areas

There are approximately 180 species of Aspergillus, but fewer than 40 of them are known to cause infections in humans. Aspergillus fumigatus is the most common cause of human Aspergillus infections. Other common species include A. flavus, A. terreus, and A. niger.

In addition to the symptoms, an X-ray or computerised tomography (CT) scan of the infected area provides clues for making the diagnosis. Whenever possible, a doctor sends a sample of infected material to a laboratory to confirm identification of the fungus.

On chest X-ray and CT, pulmonary aspergillosis classically manifests as a halo sign, and later, an air crescent sign

In hematologic patients with invasive aspergillosis, the galactomannan test can make the diagnosis in a noninvasive way. False-positive Aspergillus galactomannan tests have been found in patients on intravenous treatment with some antibiotics or fluids containing gluconate or citric acid such as some transfusion platelets, parenteral nutrition, or PlasmaLyte.

Prevention of aspergillosis involves a reduction of mold exposure via environmental infection-control. Antifungal prophylaxis can be given to high-risk patients. Posaconazole is often given as prophylaxis in severely immunocompromised patients.

If the infection is widespread or the person appears seriously ill, treatment is started immediately. '''Voriconazole''' is currently first-line treatment for invasive aspergillosis and is usually given intravenously.

There are other antifungal drugs that can be used to treat invasive aspergillosis in patients who cannot take voriconazole or who have not responded to voriconazole. These include itraconazole, lipid amphotericin formulations, caspofungin, micafungin, and posaconazole. Whenever possible, immunosuppressive medications should be discontinued or decreased The medication(s) listed below have been approved by the Food and Drug Administration (FDA) as orphan products for treatment of this condition

Aspergillosis is a rare disease.