Achondrogenesis is a group of severe disorders that affect cartilage and bone development. These conditions are characterized by a small body, short limbs, and other skeletal abnormalities. 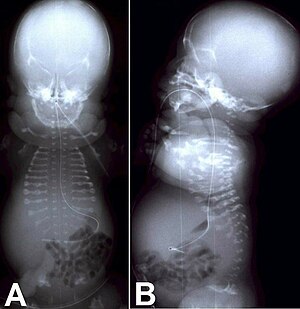 Type 1B Achondrogenesis type 1B is the most severe of a spectrum of skeletal disorders caused by mutations in the SLC26A2 gene. This gene provides instructions for making a protein that is essential for the normal development of cartilage and for its conversion to bone. Mutations in the SLC26A2 gene cause the skeletal problems characteristic of achondrogenesis type 1B by disrupting the structure of developing cartilage, which prevents bones from forming properly.

Type 1A Achondrogenesis type 1A, which is also called the Houston-Harris type, is the least well understood of the three forms. Affected infants have extremely short limbs, a narrow chest, short ribs that fracture easily, and a lack of normal bone formation (ossification) in the skull, spine, and pelvis.

Type 1B Achondrogenesis type 1B, also known as the Parenti-Fraccaro type, is characterized by extremely short limbs, a narrow chest, and a prominent, rounded abdomen. The fingers and toes are short and the feet may turn inward and upward (clubfeet). Affected infants frequently have a soft out-pouching around the belly-button (an umbilical hernia) or near the groin (an inguinal hernia).[1][1].

Type 2 Infants with achondrogenesis type 2, which is sometimes called the Langer-Saldino type, have short arms and legs, a narrow chest with short ribs, and underdeveloped lungs. This condition is also associated with a lack of ossification in the spine and pelvis. Distinctive facial features include a prominent forehead, a small chin, and, in some cases, an opening in the roof of the mouth (a cleft palate). The abdomen is enlarged, and affected infants often have a condition called hydrops fetalis, in which excess fluid builds up in the body before birth.

Most infants with achondrogenesis have severely underdeveloped lungs which leads to serious breathing problems and lung failure. Most die before or shortly after birth because of the severity of this disorder.

^Achondrogenesis (article) is provided for informational purposes only. No expressed or implied warranties as to the validity of content.
WikiMD is not a substitute for professional advice. By accessing and using WikiMD you agree to the terms of use.
Templates etc. when imported from Wikipedia, are licensed under CC BY-SA 3.0. See full disclaimers.
Retrieved from "http://www.wikimd.org/wiki/index.php?title=Achondrogenesis&oldid=2233759"
Categories: