Achondroplasia is a disorder of bone growth that prevents the changing of cartilage (particularly in the long bones of the arms and legs) to bone. 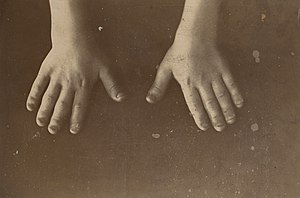 Achondroplasia is the most common type of short-limbed dwarfism. The condition occurs in 1 in 15,000 to 40,000 newborns.

Achondroplasia is inherited in an autosomal dominant pattern, which means one copy of the altered gene in each cell is sufficient to cause the disorder. About 80 percent of people with achondroplasia have average-size parents; these cases result from new mutations in the FGFR3 gene. In the remaining cases, people with achondroplasia have inherited an altered FGFR3 gene from one or two affected parents. Individuals who inherit two altered copies of this gene typically have a severe form of achondroplasia that causes extreme shortening of the bones and an underdeveloped rib cage. These individuals are usually stillborn or die shortly after birth from respiratory failure.

It is characterized by dwarfism, limited range of motion at the elbows, large head size (macrocephaly), small fingers, and normal intelligence. Achondroplasia can cause health complications such as interruption of breathing (apnea), obesity, recurrent ear infections, an exaggerated inward curve of the lumbar spine (lordosis). More serious problems include a narrowing of the spinal canal that can pinch (compress) the upper part of the spinal cord (spinal stenosis) and a buildup of fluid in the brain (hydrocephalus). Some people with achondroplasia may have delayed motor development early on, but cognition is normal.

The diagnosis of achondroplasia should be suspected in the newborn with proximal shortening of the arms, large head, narrow chest, and short fingers. When there is clinical suspicion, radiographic features can confirm the diagnosis; neonatal radiographs will show square ilia and horizontal acetabula, narrow sacrosciatic notch, proximal radiolucency of the femurs, generalized metaphyseal abnormality, and decreasing interpedicular distance caudally.[1]

Features that may be seen at any age

Establishing the Diagnosis Those with typical findings generally do not need molecular confirmation of the diagnosis. In those in whom there is any uncertainty, identification of a heterozygous pathogenic variant in FGFR3 by molecular genetic testing can establish the diagnosis.

Ventriculoperitoneal shunt may be required for increased intracranial pressure Suboccipital decompression as indicated for signs and symptoms of craniocervical junction compression Adenotonsillectomy, positive airway pressure, and, rarely, tracheostomy to correct obstructive sleep apnea Pressure-equalizing tubes for middle ear dysfunction Monitor and treat obesity Evaluation and treatment by an orthopedist if progressive bowing of the legs arises Spinal surgery may be needed for severe, persistent kyphosis Surgery to correct spinal stenosis in symptomatic adults Modification in the school and work setting to optimize function Educational support in socialization and school adjustment.[2][1].

Achondroplasia is a rare disease.

^Achondroplasia (article) is provided for informational purposes only. No expressed or implied warranties as to the validity of content.
WikiMD is not a substitute for professional advice. By accessing and using WikiMD you agree to the terms of use.
Templates etc. when imported from Wikipedia, are licensed under CC BY-SA 3.0. See full disclaimers.
Retrieved from "http://www.wikimd.org/wiki/index.php?title=Achondroplasia&oldid=2233762"
Categories: