From WikiMD's free health, diet & wellness encyclopedia
(Redirected from Acid Reflux)
Jump to navigation Jump to search
Share
This page contains changes which are not marked for translation.

Gastroesophageal Reflux Disease (GERD; or GORD when spelling oesophageal, the BE form) is defined as chronic symptoms or mucosal damage produced by the abnormal reflux of gastric contents into the esophagus.

This is commonly due to transient or permanent changes in the barrier between the esophagus and the stomach. This can be due to incompetence of the lower esophageal sphincter (LES), transient LES relaxation, impaired expulsion of gastric reflux from the esophagus, or association with a hiatal hernia.

Heartburn is the major symptom of acid in the esophagus, characterized by a burning discomfort behind the breastbone (sternum). Findings in GERD include esophagitis (reflux esophagitis) — inflammatory changes in the esophageal lining (mucosa) — strictures, difficulty swallowing (dysphagia), and chronic chest pain. Patients may have only one of those findings. Atypical symptoms of GERD include cough, hoarseness, changes of the voice, chronic ear ache, acute sharp chest pains, or sinusitis. Complicatons of GERD include stricture formation, Barrett's esophagus, esophageal ulcers and possibly even lead to esophageal cancer.

Occasional heartburn is common but does not necessarily mean one has GERD. Patients that have heartburn symptoms more than once a week are at risk of developing GERD. A hiatal hernia is usually asymptomatic, but the presence of a hiatal hernia is a risk factor for development of GERD.

GERD may be difficult to detect in infants and children. Symptoms may vary from typical adult symptoms. GERD in children may cause repeated vomiting, effortless spitting up, coughing, and other respiratory problems. Inconsolable crying, failure to gain adequate weight, refusing food and bad breath are also common. Children may have one symptom or many — no single symptom is universally present in all children with GERD.

It is estimated that of the approximately 8 million babies born in the U.S. each year, upwards of 35% of them may have difficulties with reflux in the first few months of their life. A majority of those children will outgrow their reflux by their first birthday, however, a small but significant number of them will not outgrow the condition.

Babies' immature digestive systems are usually the cause, and most infants stop having acid reflux by the time they reach their first birthday. Some children do not outgrow acid reflux, however, and continue to have it into their teen years. Children that have had heartburn that does not seem to go away, or any other symptoms of GERD for a while, should talk to their parents and visit their doctor. 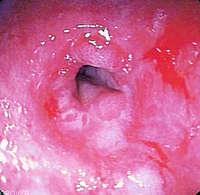 Endoscopic image of peptic stricture, or narrowing of the esophagus near the junction with the stomach. This is a complication of chronic gastroesophageal reflux disease, and can be a cause of dysphagia, or difficulty swallowing

A detailed history taking is vital to the diagnosis. Useful investigations may include barium swallow X-rays, esophageal manometry, 24 hour esophageal pH monitoring and Esophagogastroduodenoscopy (EGD). In general, an EGD is done when the patient does not respond well to treatment, or has alarm symptoms including: dysphagia, anemia, blood in the stool (detected chemically), wheezing, weight loss, or changes in the voice. Some physicians advocate once in a lifetime endoscopy for patients with longstanding GERD, to evaluate for the presence of Barrett's esophagus, a precursor lesion for esophageal adenocarcinoma.

Esophagogastroduodenoscopy (EGD) (a form of endoscopy) involves the insertion of a thin scope through the mouth and throat into the esophagus and stomach (often while the patient is sedated) in order to assess the internal surface of the esophagus, stomach and duodenum.

Biopsies can be performed during gastroscopy and these may show:

Having GERD indicates incompetence of the lower esophageal sphincter. Increased acidity or production of gastric acid can contribute to the problem, as can obesity, tight-fitting clothes and pregnancy. It is also thought that yeast infections of the digestive tract can cause GERD-like symptoms.

Factors that can contribute to GERD are:

The rubric "lifestyle modifications" is the term physicians use when recommending non-pharmaceutical treatments for GERD. A 2006 review suggested that evidence for most dietary interventions is anecdotal; only weight loss and elevating the head of the bed were found to be supported by evidence.

Certain foods and lifestyle are considered to promote gastroesophageal reflux:

However, following this list of foods directly is not 100% accurate for some have a more serious case of GERD than others. Thus, it is up to an individual to decide which foods bother them and which ones do not. But practical advice offered by many sources is to avoid food for a minimum of 2 hours before bedtime and, also, not lying down after a meal.

Elevation to the head of the bed is the next-easiest to implement. If one implements pharmacologic therapy in combination with food avoidance before bedtime and elevation of the head of the bed over 95% of patients will have complete relief. Additional conservative measures can be considered if there is incomplete relief. Another approach is to advise all conservative measures to maximize response.

Elevating the head of the bed can be accomplished by using blocks as noted above or with other items: plastic or wooden bed risers which support bed posts or legs, a bed wedge pillow, or an inflatable mattress lifter that fits in between mattress and box spring. The height of the elevation is critical and must be at a minimum of 6 to 8 inches (15 to 20 cm) in order to be at least minimally effective in hindering the backflow of gastric fluids. It should be noted that some innerspring mattresses do not work well when inclined and tend to cause back pain thus foam based mattresses are to be preferred. Moreover, some use higher degrees of incline than provided by the commonly suggested 6 to 8 inches (15 to 20 cm) and claim greater success. Elevating the head of the bed is also known as "positional therapy".

A number of drugs are registered for the treatment of GERD, and they are among the most-often-prescribed forms of medication in most Western countries. They can be used in combination with other drugs, although some antacids can impede the function of other medications:

The standard surgical treatment, sometimes preferred over longtime use of medication, is the Nissen fundoplication. The upper part of the stomach is wrapped around the LES to strengthen the sphincter and prevent acid reflux and to repair a hiatal hernia. The procedure is often done laparoscopically.

An obsolete treatment is vagotomy ("highly selective vagotomy"), the surgical removal of vagus nerve branches that innervate the stomach lining. This treatment has been largely replaced by medication.

In 2000, the U.S. Food and Drug Administration (FDA) approved two endoscopic devices to treat chronic heartburn. One system, Endocinch, puts stitches in the LES to create little pleats that help strengthen the muscle. Another, the Stretta Procedure, uses electrodes to apply radio frequency energy to the LES. The long term outcomes of both procedures compared to a Nissen fundoplication are still being determined.

Subsequently the NDO Surgical Plicator was FDA cleared for the endoscopic treatment of GERD. The Plicator creates a plication, or fold, of tissue near the gastroesophageal junction, and fixates the plication with a suture-based implant. The Plicator is currently marketed by NDO Surgical, Inc. [1].

Another treatment which involved injection of a solution that is injected during endoscopy into the lower esophageal wall was available for approximately one year ending in late 2005. It was marketed under the name Enteryx. It was removed from the market due to several reports of complications from misplaced injections.

Barrett's esophagus, a type of dysplasia, is a precursor high-grade dysplasia, which is in turn a precursor condition for carcinoma. The risk of progression from Barrett's to dysplasia is uncertain but is estimated to include 0.1% to 0.5% of cases, and has probably been exaggerated in the past. Due to the risk of chronic heartburn progressing to Barrett's, EGD every 5 years is recommended for patients with chronic heartburn, or who take medication for GERD chronically.

GERD has been linked to laryngitis, chronic cough, pulmonary fibrosis, earache, and asthma, even when not clinically apparent, as well as to laryngopharyngeal reflux and ulcers of the vocal cords.