Palmoplantar keratoderma (PPK) is a group of skin conditions characterized by thickening of the skin on the palms of the hands and soles of the feet. PPK can also be a feature of various underlying syndromes. 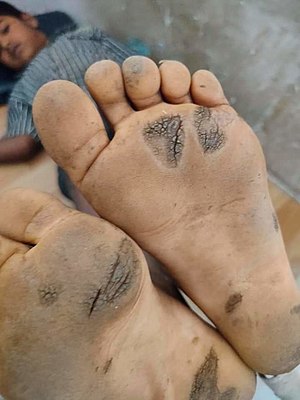 Depending on the gene involved, inheritance can be autosomal dominant or autosomal recessive. Autosomal dominant inheritance means that having a mutation in only one copy of the responsible gene in each cell is enough to cause features of the condition. In some cases, an affected person inherits the mutated gene from an affected parent. In other cases, the mutation occurs for the first time in a person with no family history of the condition. This is called a de novo mutation. When a person with a mutation that causes an autosomal dominant condition has children, each child has a 50% (1 in 2) chance to inherit that mutation. For this reason, it is not uncommon for an autosomal dominant condition to be present in more than one generation in a family.

Treatment options may depend on the specific type of PPK a person has and may include:

^Palmoplantar keratoderma (article) is provided for informational purposes only. No expressed or implied warranties as to the validity of content.
WikiMD is not a substitute for professional advice. By accessing and using WikiMD you agree to the terms of use.
Templates etc. when imported from Wikipedia, are licensed under CC BY-SA 3.0. See full disclaimers.
Retrieved from "http://www.wikimd.org/wiki/index.php?title=Palmoplantar_keratoderma&oldid=2380554"
Categories: