The adult/permanent dentition consisting of 32 teeth is completed from 18 to 25 years of age if the third molar is included. Apparently there are four or more centers of formation (developmental lobes) for each tooth. The formation of each center proceeds until a coalescence of all of them takes place. During this period of odontogenesis, injury to the developing tooth can lead to anomalous morphological features (e.g., peg-shaped lateral incisor). Although no lines of demarcation are found in the dentin to show this development, signs are found on the surfaces of the crowns and roots; these are called developmental grooves. Fractures of the teeth occur most commonly along these grooves. 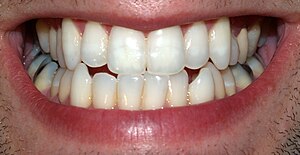 The follicles of the developing incisors and canines are in a position lingual to the deciduous roots.

The developing premolars, which eventually take the place of deciduous molars, are within the bifurcation of primary molar roots. The permanent incisors, canines, and premolars are called succedaneous teeth because they take the place of their primary predecessors.

Mandibular lateral incisors erupt very soon after the central incisors, often simultaneously. The maxillary central incisors" erupt next in chronological order, and maxillary lateral incisors make their appearance about 1 year later. The first premolars follow the maxillary laterals in sequence when the child is about 10 years old; the mandibular canines (cuspids) often appear at the same time. The second premolars follow during the next year, and then the maxillary canines follow. Usually, the second molars come in when the individual is about 12 years of age; they are posterior to the first molars and are commonly called 12-year molars.

The maxillary canines occasionally erupt along with the second molars, but in most instances of normal eruption, the canines precede them somewhat.

The third molars do not come in until age 17 or later. Considerable posterior jaw growth is required after age 12 to allow room for these teeth. Third molars are subject to many anomalies and variations of form. Insufficient jaw development for their accommodation complicates matters in the majority of cases. Individuals who have properly developed third molars in good alignment are very much in the minority. Third-molar anomalies and variations with the complications brought about by misalignment and subnormal jaw development comprise a subject too vast to be covered here. Figure 2-15 shows an anatomical specimen with a full complement of 32 teeth.

^Adult dentition (article) is provided for informational purposes only. No expressed or implied warranties as to the validity of content.
WikiMD is not a substitute for professional advice. By accessing and using WikiMD you agree to the terms of use.
Templates etc. when imported from Wikipedia, are licensed under CC BY-SA 3.0. See full disclaimers.
Retrieved from "http://www.wikimd.org/wiki/index.php?title=Adult_dentition&oldid=2364653"