Mastocytosis occurs when too many mast cells accumulate in the skin and/or internal organs such as the liver, spleen, bone marrow, and small intestines. Mast cells are a type of white blood cell in the immune system. Mast cells are responsible for protecting the body from infection and releasing chemicals to create inflammatory responses. 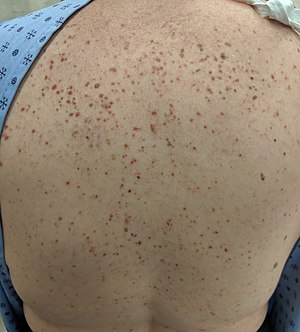 There are two main forms of mastocytosis. Cutaneous mastocytosis only affects the skin and is more common in children. Systemic mastocytosis affects more than one part of the body and is more common in adults. Cutaneous mastocytosis: This form only affects the skin. The most common signs and symptoms include small tan-red macules that develop on the body, especially on the upper and lower extremities and on the thorax and abdomen. Another common feature is known as Darier’s sign, which is the development of lesions in a new area shortly after irritation to the skin such as scratching. When cutaneous mastocytosis occurs in children, signs and symptoms tend to improve or go away completely by the time the child reaches puberty.

Systemic mastocytosis: This form affects more than one part of the body such as the bone marrow, liver, and GI system. Signs and symptoms may include the skin findings associated with cutaneous mastocytosis, as well as symptoms such as low blood pressure (hypotension) abdominal pain, vomiting, diarrhea, fatigue, and frequent headaches. These symptoms may be episodic, meaning they only occur once in a while, or chronic, meaning symptoms are present during a long time. People with systemic mastocytosis may also present to the doctor with an enlarged liver and spleen (hepatosplenomegaly), anemia, or osteoporosis.

Most cases of mastocytosis are caused by a change (known as variation or mutation) in the KIT gene. This gene provides instructions to the body to make a protein that helps control many important cellular processes such as cell growth and division, survival, and movement. This protein is also important for the development of certain types of cells, including mast cells. Mast cells are cells of the immune system that protect the body against infections and produce an inflammatory response when it senses that the body is being attacked.

Mutations in the KIT gene can lead to an overproduction of mast cells. In mastocytosis, mast cells accumulate in the skin and/or internal organs, leading to the many signs and symptoms of the disease.

Most cases of mastocytosis are not inherited. The change (variation or mutation) in the KIT gene that causes many cases of mastocytosis is typically a somatic mutation. Somatic mutations occur after the egg and sperm join (conception) and are only present in certain cells of the body. Typically, affected cells do not include the egg and sperm (germ cells). Therefore, the genetic change associated with mastocytosis typically only occurs in one person in a family, and the disease is not passed on to the next generation.

Mastocytosis can rarely affect more than one person in the same family. This is known as familial mastocytosis and occurs when a person does have the KIT mutation in the egg or sperm (germ cells). In these cases, the mastocytosis is inherited in an autosomal dominant manner.This means that to be have mastocytosis, a person only needs a disease-causing genetic change in one copy of the KIT gene. A person with familial mastocytosis has a 50% chance with each pregnancy of passing along the changed gene to his or her child.

Mastocytosis is often first suspected by a doctor when a person has signs and symptoms of the disease. A diagnosis of mastocytosis that causes skin lesions may be confirmed by a skin biopsy of the lesion. During a skin biopsy, a sample of skin tissue is taken and looked at under a microscope for the presence of dense areas of mast cells. If there are no cutaneous lesions or if the skin biopsy reveals uncertain results, a bone marrow biopsy may be performed. This procedure can also be useful in differentiating between cutaneous and systemic mastocytosis.

Blood and/or urine tests may also be used to measure the levels of specific chemicals or substances related to mast cells. High levels of certain substances support the diagnosis of mastocytosis. Some substances may be elevated in systemic mastocytosis but not in cutaneous mastocytosis.

Other evaluations or tests used to confirm a diagnosis may include a bone scan, gastrointestinal workup, or genetic testing to confirm there is a mutation in the KIT gene. Additional tests may be ordered to rule out other diseases that may cause similar symptoms, such as anaphylaxis, pheochromocytoma, carcinoid syndrome, or Zollinger-Ellison syndrome.

The treatment for mastocytosis depends on the particular symptoms of each person. Treatment for symptoms that affect the skin include antihistamines and oral psoralen plus UVA (PUVA) therapy If the symptoms are not responsive to other treatment, a doctor may prescribe steroid creams, ointments, or solutions to be applied to the skin (topical corticosteroids treatment). Proton pump inhibitors can be used to treat gastrointestinal symptoms and bone pain. Different treatments work better for some people than others. Many specialists recommended that people with mastocytosis have injectable epinephrine that they can use in case of anaphylactic shock. Other recommendations include trying to avoid known triggers of symptoms of mastocytosis. The medication(s) listed below have been approved by the Food and Drug Administration (FDA) as orphan products for treatment of this condition.

Mastocytosis is described as a rare disease, but to our knowledge, the exact incidence and prevalence are not known.A diseaseis considered rare if it affects fewer than 200,000 people in the United States at any given time. An estimate of prevalence from a recent population-based study is approximately 1 case per 10,000 people.

^Mastocytosis (article) is provided for informational purposes only. No expressed or implied warranties as to the validity of content.
WikiMD is not a substitute for professional advice. By accessing and using WikiMD you agree to the terms of use.
Templates etc. when imported from Wikipedia, are licensed under CC BY-SA 3.0. See full disclaimers.
Retrieved from "http://www.wikimd.org/wiki/index.php?title=Mastocytosis&oldid=2069047#Classification"
Categories: