Batten disease is a fatal disease of the nervous system that typically begins in childhood.[1] Onset of symptoms is usually between 5 and 10 years of age.[1] Often, it is autosomal recessive. It is the most common form of a group of disorders called the neuronal ceroid lipofuscinoses (NCLs).

Early signs and symptoms of the disorder usually appear around ages 2–10, with gradual onset of vision problems or seizures. Early signs may be subtle personality and behavioral changes, slow learning or regression, repetitive speech or echolalia, clumsiness or stumbling. Slowing head growth in the infantile form, poor circulation in lower extremities (legs and feet), decreased body fat and muscle mass, curvature of the spine, hyperventilation and/or breath-holding spells, teeth grinding and constipation may occur.

Over time, affected children suffer mental impairment, worsening seizures and progressive loss of sight, speech and motor skills. Batten disease is a terminal disease; life expectancy varies depending on the type or variation.

Females with juvenile Batten disease show first symptoms a year later than males, but on average die a year sooner.[5]

NCLs are a family of diseases that are inherited in an autosomal recessive manner. Collectively referred to as Batten disease, NCLs are responsible for most paediatric neurodegenerative diseases. The specific type of NCL is characterized by the age of symptomatic onset and genetic mutation involved. Currently, mutations in ten genes are believed to lead to the development of Batten disease; 'the incidence is as high as one in 12,500 live births'.[6] 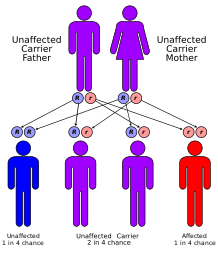 Batten disease has an autosomal recessive pattern of inheritance.

The CLN3 gene is located on the short arm of chromosome 16 at gene position 12.1 (16p12.1), and mutations within this gene are the major cause of juvenile NCL. More specifically, 73% of Batten disease cases are due to a 1.02-kb deletion within this gene, CLN3, which causes a frame shift which produces a truncated mutant gene product of only 181 amino acids in length when compared to the wild-type gene product of 438 amino acids in length. Normal-functioning CLN3 encodes for a hydrophobic transmembrane protein that is mainly localized to the lysosome; however, the 181 amino acid mutant gene product was instead found to primarily localize to the endoplasmic reticulum and Golgi apparatus. The precise function of the CLN3 gene product remains unknown.[6]

Batten disease is rare; misdiagnosis may lead to increased medical expenses, family stress, and the chance of using incorrect forms of treatment, which may exacerbate the patient's condition. Nevertheless, Batten disease can be diagnosed if properly detected. Vision impairment is the most common observable symptom of the disease. Occurrences in children are more prevalent than occurrences in adolescents or adults.[citation needed] Children or adults suspected of having Batten disease should initially see an optometrist or ophthalmologist. A fundus eye examination that aids in the detection of common vision impairment abnormalities, such as granularity of the retinal pigment epithelium in the central macula will be performed.[citation needed] Though it is also seen in a variety of other diseases, a loss of ocular cells is a warning sign of Batten disease. If Batten disease is the suspected diagnosis, a variety of tests is conducted to help accurately confirm the diagnosis, including:

Batten disease is a terminal illness; the FDA has approved Brineura (cerliponase alfa) as a treatment for a specific form of Batten disease. Brineura is the first FDA-approved treatment to slow loss of walking ability (ambulation) in symptomatic pediatric patients 3 years of age and older with late infantile neuronal ceroid lipofuscinosis type 2 (CLN2), also known as tripeptidyl peptidase-1 (TPP1) deficiency. Palliative treatment is symptomatic and supportive.

Batten disease is named after the British pediatrician Frederick Batten, who first described it in 1903.[10][11] Also known as Spielmeyer-Vogt-Sjögren-Batten disease, it is the most common form of a group of disorders called neuronal ceroid lipofuscinosis (NCL). Although Batten disease is usually regarded as the juvenile form of NCL, some physicians use the term Batten disease to describe all forms of NCL.

Memorial sculpture in Progress Frenchman's Bay East Park, Pickering, Ontario, Canada, dedicated to the children who have lost or will lose their lives to Batten disease

In June 1987, a phase-I clinical trial was launched at Weill Cornell Medical College of Cornell University to study a gene therapy method for treatment of the signs and symptoms of LINCL. The experimental drug works by delivering a gene transfer vector called AAV2CUhCLN2 to the brain.[12] Although the trial is not matched, randomized, or blinded and lacked a contemporaneous placebo/sham control group, assessment of the primary outcome variable suggests a slowing of progression of LINCL in the treated children.[13]

In November 2006, after receiving FDA clearance, neurosurgeon Nathan Selden, pediatrician Bob Steiner, and colleagues at Doernbecher Children's Hospital at Oregon Health and Science University began a clinical study in which purified neural stem cells were injected into the brain of Daniel Kerner, a six-year-old child with Batten disease, who had lost the ability to walk and talk. This patient was the first of six to receive the injection of a stem cell product from StemCells Inc., a Palo Alto biotech company. These are believed to be the first-ever transplants of fetal stem cells into the human brain.[15] By early December, the child had recovered well enough to return home, and some signs of speech returning were reported.[16] [17] The main goal of phase-I clinical trials, however, was to investigate the safety of transplantation. Overall, the phase-I data demonstrated that high doses of human neural stem cells, delivered by a direct transplantation procedure into multiple sites within the brain, followed by 12 months of immunosuppression, were well tolerated by all six patients enrolled in the trial. The patients’ medical, neurological, and neuropsychological conditions, following transplantation, appeared consistent with the normal course of the disease. Daniel Kerner died on August 20th, 2009.

In 2010, Cherie and Jim Flores donated $2 million, the biggest gift in Batten disease research history, and the Beyond Batten Disease Foundation contributed $500,000 to establish laboratories for Italian researchers Drs. Ballabio, Sardiello and their colleagues at the Jan and Dan Duncan Neurological Research Institute of Texas Children’s Hospital.[14]

During 2011, the first controlled clinical trials began with the University of Rochester for a treatment for Batten Disease.[15] The trial included 30 patients who were experiencing signs of the disease in the hope of slowing its progress.

In complex diseases such as Batten, therapies that address multiple aspects of the disease at the same time have the potential for higher impact than those focusing on one aspect.“The use of several treatment strategies might offer additional benefits to patients with neurodegenerative disease, but the benefits of this approach must be weighed carefully against the additional adverse effects that combined treatments might bring,” the researchers wrote. The medical team also noted that “over the past two decades, scientists and clinicians within the Batten disease community have worked to ensure that tools are in place to enable progress towards effective treatments at an unprecedented pace. ”Recent progress in Batten disease research offers hope that efficient and targeted therapies will be available soon, the researchers said, noting that the “Batten disease research community is becoming a model of how effective, efficient rare disease research can be accomplished by working together.”

Quick links: Medicine Portal | Encyclopedia‏‎‏‎ | Gray's Anatomy‏‎ | Topics‏‎ |‏‎ Diseases‏‎ | Drugs | Wellness | Obesity‏‎ | Metabolic syndrome | Weight loss*
Disclaimer: The entire contents of WIKIMD.ORG are for informational purposes only and do not render medical advice or professional services. If you have a medical emergency, you should CALL 911 immediately! Given the nature of the wiki, the information provided may not be accurate, misleading and or incorrect. Use the information on this wiki at your own risk! See full Disclaimer.
Link to this page: <a href="http://www.wikimd.org/wiki/Batten_disease">Batten disease</a>