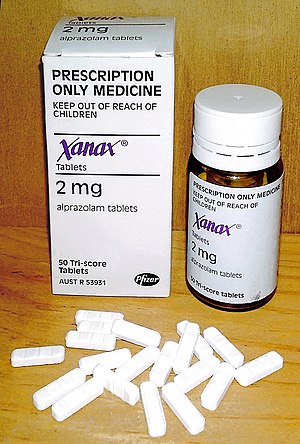 Benzodiazepines are organic chemical substances, made of two carbon rings. Certain benzodiazepines can be used as drugs that increase the effect of the neurotransmitter GABA. The resulting drug has sedative effects. Depending on the drug, the effect may be stronger or weaker. The first benzodiazepine, chlordiazepoxide (Librium), was discovered accidentally by Leo Sternbach in 1955, and made available in 1960 by the medicine company Hoffmann–La Roche.

In general taking benzodiazepines is safe and effective in the short term. Longer term use is controversial: In the long term, the drug may become less effective and problems of dependency may show.

Benzodiazepines may not be safe to be taken during pregnancy. They are not teratogens, which cause birth defects, but they may cause cleft palate in a small number of babies. Benzodiazepines can be taken in overdoses and can cause dangerous deep unconsciousness. However, they are much less toxic than the drugs they replaced, the barbiturates. Death rarely results when a benzodiazepine is the only drug taken. When combined with other central nervous system depressants such as alcohol and opiates, the potential for toxicity increases.[1] Benzodiazepines are commonly misused and taken in combination with other drugs of abuse.[2][3][4]

Quick links: Medicine Portal | Encyclopedia‏‎‏‎ | Gray's Anatomy‏‎ | Topics‏‎ |‏‎ Diseases‏‎ | Drugs | Wellness | Obesity‏‎ | Metabolic syndrome | Weight loss*
Disclaimer: The entire contents of WIKIMD.ORG are for informational purposes only and do not render medical advice or professional services. If you have a medical emergency, you should CALL 911 immediately! Given the nature of the wiki, the information provided may not be accurate, misleading and or incorrect. Use the information on this wiki at your own risk! See full Disclaimer.
Link to this page: <a href="http://www.wikimd.org/wiki/Benzodiazepine">Benzodiazepine</a>