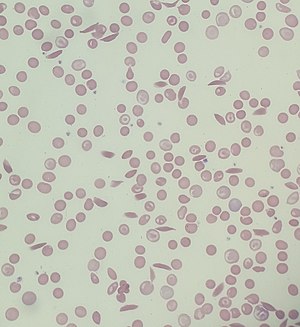 Blood is a circulating tissue composed of fluid plasma and cells (red blood cells, white blood cells, platelets). Medical terms related to blood often begin in hemo- or hemato- (BE: haemo- and haemato-) from the Greek word "haima" for "blood." Anatomically, blood is considered a connective tissue from both its origin in the bones and its function.

The primary function of blood is to supply nutrients (oxygen, glucose) and constitutional elements to tissues and to remove waste products (such as carbon dioxide and lactic acid). Blood also enables cells (leukocytes, abnormal tumor cells) and different substances (amino acids, lipids, hormones) to be transported between tissues and organs. Problems with blood composition or circulation can lead to downstream tissue dysfunction. Blood is also involved in homeostasis by acting as a medium for transferring heat to the skin and by acting as a buffer system for bodily pH.

The blood is circulated around the lungs and body by the pumping action of the heart. Additional return pressure may be generated by gravity and the actions of skeletal muscles.

Blood is composed of several kinds of corpuscles; these formed elements of the blood constitute about 40% of whole blood. The other 60% is blood plasma, a fluid that is the blood's liquid medium, appearing yellow in color. The normal pH of human arterial blood is approximately 7.40 (normal range is 7.35-7.45). Blood that has a pH below 7.35 is acidic, while blood pH above 7.45 is alkaline. Blood pH along with arterial carbon dioxide tension (PaCO2) and HCO3 readings are helpful in determining the acid-base balance of the body. Blood is about 7% of the human body weight [1], so the average adult has a blood volume of about 5 liters, of which 2.7-3 liters is plasma. The combined surface area of all the erythrocytes in the human anatomy would be roughly 2,000 times as great as the body's exterior surface.

Blood plasma is essentially an aqueous solution containing 96% water, 4% blood plasma proteins, and trace amounts of other materials. Some components are:

Together, plasma and corpuscles form a non-Newtonian fluid whose flow properties are uniquely adapted to the architecture of the blood vessels.

Blood cells are produced in the bone marrow; the process is termed hematopoiesis. The proteinaceous component is produced overwhelmingly in the liver, while hormones are produced by the endocrine glands and the watery fraction regulated by the hypothalamus and maintained by the kidney and indirectly by the gut.

Blood cells are degraded by the spleen and the Kupffer cells in the liver. The liver also clears proteins and amino acids. The kidney secretes many small proteins into the urine. Erythrocytes usually live up to 120 days before they are systematically replaced by new erythrocytes created by the process of hematopoiesis.

Blood oxygenation is measured in several ways, but the most important measure is the hemoglobin saturation percentage. This is a non-linear (sigmoidal) function of the partial pressure of oxygen. About 98.5% of the oxygen in a sample of arterial blood in a healthy human breathing air at normal pressure is chemically combined with the Hb. Only 1.5% is physically dissolved in the other blood liquids and not connected to Hb. The hemoglobin molecule is the primary transporter of oxygen in mammals and many other species (for exceptions, see below).

With the exception of pulmonary and umbilical arteries and their corresponding veins, arteries carry oxygenated blood away from the heart and deliver it to the body via arterioles and capillaries, where the oxygen is consumed; afterwards, venules and veins carry deoxygenated blood back to the heart.

Differences in infrared absorption between oxygenated and deoxygenated blood form the basis for realtime oxygen saturation measurement in hospitals and ambulances.

Under normal conditions in humans, hemoglobin in blood leaving the lungs is about 96-97% saturated with oxygen; 'deoxygenated' blood returning to the lungs is still approximately 75% saturated.[2][3] A fetus, receiving oxygen via the placenta, is exposed to much lower oxygen pressures (about 20% of the level found in an adult's lungs) and so fetuses produce another form of hemoglobin with a much higher affinity for oxygen (hemoglobin F) in order to extract as much oxygen as possible from this sparse supply.[4]

Other substances can bind to the haemoglobin besides oxygen which can cause irreversible damage to the body. Carbon monoxide for example is extremely dangerous when absorbed into the blood. When combined with the haemoglobin, it irreversibly makes carboxyhaemoglobin which reduces the volume of oxygen that can be carried in the blood. This can very quickly cause suffocation as oxygen is vital to many organisms (including humans). This damage can occur when smoking a cigarette (or similar item) or in event of a fire. Thus carbon monoxide is considered far more dangerous than the actual fire itself because it reduces the oxygen carrying content of the blood.

In insects, the blood (more properly called hemolymph) is not involved in the transport of oxygen. (Openings called tracheae allow oxygen from the air to diffuse directly to the tissues). Insect blood moves nutrients to the tissues and removes waste products in an open system.

In some small invertebrates like insects, oxygen is simply dissolved in the plasma. Larger animals use respiratory proteins to increase the oxygen carrying capacity. Hemoglobin is the most common respiratory protein found in nature. Hemocyanin (blue) contains copper and is found in crustaceans and mollusks. It is thought that tunicates (sea squirts) might use vanabins (proteins containing vanadium) for respiratory pigment (bright green, blue, or orange).

In many invertebrates, these oxygen-carrying proteins are freely soluble in the blood; in vertebrates they are contained in specialized red blood cells, allowing for a higher concentration of respiratory pigments without increasing viscosity or damaging blood filtering organs like the kidneys.

In humans and other hemoglobin-using creatures, oxygenated blood is a bright red in its color. This is due to oxygenated iron in the red blood cells. Deoxygenated blood is a darker shade of red, which can be seen during blood donation and when venous blood samples are taken. However, due to an optical effect caused by the way in which light penetrates through the skin, veins typically appear blue in color. This has led to a common misconception that before venous blood is exposed to air it is blue.

Hippocratic medicine considered blood one of the four humors (together with phlegm, yellow bile and black bile). As many diseases were thought to be due to an excess of blood, bloodletting and leeching were a common intervention until the 19th century (it is still used for some rare blood disorders).

In classical Greek medicine, blood was associated with air, springtime, and with a merry and gluttonous (sanguine) personality. It was also believed to be produced exclusively by the liver.

Blood pressure and blood tests are amongst the most commonly performed diagnostic investigations that directly concern the blood.

Problems with blood circulation and composition play a role in many diseases.

Blood transfusion is the most direct therapeutic use of blood. It is obtained from human donors by blood donation. As there are different blood types, and transfusion of the incorrect blood may cause severe complications, crossmatching is done to ascertain the correct type is transfused.

Many forms of medication (from antibiotics to chemotherapy) are administered intravenously, as they are not readily or adequately absorbed by the digestive tract.

As stated above, some diseases are still treated by removing blood from the circulation.

It is the fluid part of the blood that saves lives where severe blood loss occurs, other preparations can be given such as ringers atopical plasma volume expander as a non-blood alternative, and these alternatives where used are rivalling blood use where used.

Due to its importance to life, blood is associated with a large number of beliefs. One of the most basic is the use of blood as a symbol for family relationships; to be "related by blood" is to be related by ancestry or descendance, rather than marriage. This bears closely to bloodlines, and sayings such as "blood is thicker than water" and "bad blood", as well as "Blood brother".

Among the Germanic tribes (such as the Anglo-Saxons and the Vikings), blood was used during the sacrifices, the Blóts. The blood was considered to have the power of its originator and after the butchering the blood was sprinkled on the walls, on the statues of the gods and on the participants themselves. This act of sprinkling blood was called bleodsian in Old English and the terminology was borrowed by the Roman Catholic Church becoming to bless and blessing. The Hittite word for blood, ishar was a cognate to words for "oath" and "bond", see Ishara.

In Judaism, blood cannot be consumed even in the smallest quantity (Leviticus 3:17 and elsewhere); this is reflected in the dietary laws. Blood is purged from meat by salting and pickling.

Other rituals involving blood are the covering of the blood of fowl and game after slaughtering (Leviticus 17:13); the reason given by the Torah is: "Because the life of every animal is [in] his blood" (ibid 17:14), although from its context in Leviticus 3:17 it would appear that blood cannot be consumed because it is to be used in the sacrificial service (known as the korbanot), in the Temple in Jerusalem.

Ironically, Judaism has historically been the religion to be most affected by blood libels.

Most Christians, typically Roman Catholics, Eastern Orthodox, Anglicans, Lutherans, and Moravians, believe that the Eucharist wine becomes, upon consecration, the Blood of Jesus (transubstantiation). This belief is rooted in the Last Supper as written in the four gospels of the Bible, in which Jesus stated to his disciples that the bread which they ate represented his body, and the wine represented his blood. "This cup is the new testament in my blood, which is shed for you." (Luke 22:20). Other forms of Protestantism, especially those of a Wesleyan or Presbyterian lineage, teach that Christ, while not physically present, is somehow still there.

Vampires are fictional beings thought to cheat death by drinking the blood of the living.

Blood is one of the body fluids that has been used in art.[5]

Quick links: Medicine Portal | Encyclopedia‏‎‏‎ | Gray's Anatomy‏‎ | Topics‏‎ |‏‎ Diseases‏‎ | Drugs | Wellness | Obesity‏‎ | Metabolic syndrome | Weight loss*
Disclaimer: The entire contents of WIKIMD.ORG are for informational purposes only and do not render medical advice or professional services. If you have a medical emergency, you should CALL 911 immediately! Given the nature of the wiki, the information provided may not be accurate, misleading and or incorrect. Use the information on this wiki at your own risk! See full Disclaimer.
Link to this page: <a href="http://www.wikimd.org/wiki/Blood_and_Blood_Disorders">Blood and Blood Disorders</a>