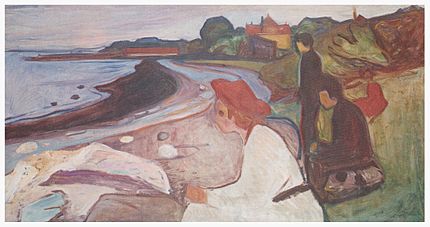 Youth at the sea is a painting by Edvard Munch, done in 1904. It is part of the Linda Frieze. According to art historian Nicolai Stang, this picture shows the inability to make contact with other people (which is one of the main symptoms of BPD). Some psychologists diagnosed Munch as a sufferer of BPD.[1][2]

Borderline personality disorder (BPD) is a long-term mental illness. It is a type of cluster B personality disorder. People diagnosed with BPD are often very impulsive, and generally have a low self-esteem. Moods often change quickly. For these reasons, these people often have trouble keeping a stable relationship. Frequently, people with BPD also suffer from other conditions, such as clinical depression or they show self-harming behavior. Treating people with BPD is difficult, and is usually done using a combination of therapy and drugs.

C.H.Huges used the term "Borderland", to describe a number of conditions bordering mental health issues. Adolf Stern gave a description of some of the symptoms in 1938, and called them "border line group".[3] People showed both conditions related to psychosis, and related to neurosis, so the term was thought fitting, at the time.

People diagnosed with BPD have strong mood swings. They see things as "all good" or "all bad" (splitting), and are frequently confused about their identity. They usually have a lot of trouble with relationships with people. They have strong emotions which often change quickly. They are often reckless, destructive or self-destructive.

People with BPD often act impulsively, which means they do things or say things without thinking. This behavior can be dangerous, and includes: abusing drugs or alcohol, eating too much or too little, having unsafe sex or frequent sex with multiple partners, spending a lot of money, and driving dangerously.[5] Impulsive behavior may also include leaving jobs or relationships, running away and self-injury.[19]

Cuts with a knife, on the upper arm. People with BPD often hurt themselves.

Self-injury is common for people with BPD. Sometimes people hurt themselves without wanting to commit suicide.[6][7] Common methods include cutting, burning, head banging, and drug overdose. The reasons people with BPD give for non-suicidal self-injury (NSSI) are different from their reasons for suicide attempts.[8] Reasons they give for hurting themselves include expressing anger, punishing themselves, creating normal feelings, and distracting themselves from emotional pain or difficult situations.[8] When suicide is the goal, they usually attempt suicide with the belief that others will be better off without them.[8] Both suicidal and non-suicidal self-injury are a response to feeling negative emotions.[8]

People with BPD can be very sensitive to the way others treat them. They can feel very happy and grateful when they feel someone has been nice to them, and very sad or angry when they feel someone has been hurtful to them.[9] Their feelings about others often switch from positive to negative if they feel like they might lose someone, if they think someone important to them does not care about them, or if something is not as good as they expected. They think in extremes, seeing things or people as "all good" or "all bad". This is sometimes called black-and-white thinking. It includes a change from admiring someone to devaluing them, often feeling pure anger or dislike.[28] The way they see themselves can also change quickly from positive to negative.

While strongly wanting to feel closeness, people with BPD tend to be anxious, have mixed feelings, or be paranoid when it comes to their relationships.[10] They often view the world as dangerous and bad.[9] BPD is linked to high levels of stress and conflict in romantic relationships, abuse, and unwanted pregnancy. These things are also common with other types of personality disorders.[11]

People with BPD tend to have trouble seeing a clear picture of their identity. It is difficult for them to know what they value and love.[35] They often do not know about their long-term goals for relationships and jobs. They often have trouble making decisions and can change their minds quickly. These difficulties can cause people with BPD to feel "empty" and "lost".[35]

People with BPD are easily bored and it is hard for them to concentrate.[35] People with BPD may tend to disconnect or "dissociate" from people and things around them, which can be thought of as an intense form of "zoning out".[36] This often happens in response to a painful event, or something that triggers the memory of a painful event. This can give make the person feel better for a short time, it can also have the unwanted side effect of blocking ordinary feelings. This has the result of keeping people with BPD from learning how to handle these feelings, and can make it difficult for them to make positive choices when they feel these emotions.[36] Sometimes other people can see when someone with BPD is dissociating because the expressions in their face or voice can seem emotionless, or they look like they are distracted. Sometimes when someone with BPD is dissociating, other people are not able to see or know that it is happening. [36]

Psychiatrists and other mental health professionals diagnose people with BPD using a book called the Diagnostic and Statistical Manual of Mental Disorders (DSM-IV-TR). They look at a person's behaviour and how they are feeling. If the person has five or more of the following signs, the DSM-IV-TR says that they have BPD.[12]

Nearly all people with BPD also have other mental health problems, such as: mood disorders, attention-deficit hyperactivity disorder, eating disorders, anxiety disorders (especially post-traumatic stress disorder), and other personality disorders. Most have or have had substance abuse and/or addictions. Self-harm and suicidal behavior are also common.[13]

Other illnesses that often happen with BPD include diabetes, high blood pressure, chronic back pain, arthritis, and fibromyalgia.

The cause for BPD is not known. There may be several causes for people developing BPD. Some researchers think that it might be caused by trauma in childhood, such as sexual abuse, physical abuse and neglect.[14][15][16][17] Many people with BPD were abused when they were children.[18] Modern thinking as demonstrated by functioning MRI scans is that neurotransmitters within the brain are not working correctly, and messages are not conducted in the usual way.

Treating BPD is very difficult and takes a long time. Today, most people with BPD are treated with different kinds of psychotherapy. One of these is called dialectical behavioral therapy. In addition to therapy, drugs such as antidepressants, antipsychotics or mood stabilizers are often used. Many sufferers recover within 10 years.

Quick links: Medicine Portal | Encyclopedia‏‎‏‎ | Gray's Anatomy‏‎ | Topics‏‎ |‏‎ Diseases‏‎ | Drugs | Wellness | Obesity‏‎ | Metabolic syndrome | Weight loss*
Disclaimer: The entire contents of WIKIMD.ORG are for informational purposes only and do not render medical advice or professional services. If you have a medical emergency, you should CALL 911 immediately! Given the nature of the wiki, the information provided may not be accurate, misleading and or incorrect. Use the information on this wiki at your own risk! See full Disclaimer.
Link to this page: <a href="http://www.wikimd.org/wiki/Borderline_personality_disorder">Borderline personality disorder</a>