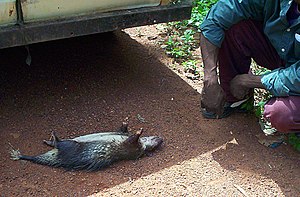 The term bushmeat, also called wildmeat and game meat, refers to meat from non-domesticated mammals, reptiles, amphibians and birds hunted for food in tropical forests.[1] This harvesting and trade of wildlife is considered a threat to biodiversity.[2]

The volume of the bushmeat trade in West and Central Africa was estimated at 1-5 million tonnes per year at the turn of the century.[3]

Many conservation organizations have come together to address the bushmeat phenomenon through the formation of the Bushmeat Crisis Task Force, the mission of which is to build a public, professional and government constituency aimed at identifying and supporting solutions that effectively respond to the bushmeat crisis in Africa and around the world.[4]

Today the term bushmeat is commonly used for meat of terrestrial wild or feral mammals, killed for sustenance or commercial purposes throughout the humid tropics of the Americas, Asia, and Africa. To reflect the global nature of hunting of wild animals Resolution 2.64 of the IUCN General Assembly in Amman in October 2000 referred to wild meat rather than bushmeat. A more worldwide term is game. The term bushmeat crisis tends to be used to describe unsustainable hunting of often endangered wild mammals in West and Central Africa and the humid tropics, depending on interpretation. African hunting predates recorded history; by the 21st century it had become an international issue.[5]

The bushmeat trade refers to the sale of any wild or feral species, though Western sources tend to focus on the trade specifically involving great apes. Though some bushmeat hunters have been targeting gorillas, chimpanzees, bonobos, and other primate species, great apes constitute less than 1% of bushmeat from all species sold on the market. The high rate of harvest, combined with habitat loss and alteration, has led to very severe population declines; if this trend is unchecked, extinction is likely.[6]

The issue of bushmeat hunting is highly politicized, with little support for the practice outside the forests where it is conducted and cities where it is sold. International efforts to stop it have been launched, especially in the United States, United Kingdom, and Canada.[citation needed]

In countries where ape hunting occurs, orphaned apes are deemed unable to survive on their own, but also deemed too small to be worth shooting and cutting up. They are instead raised and returned to the wild as part of these efforts.[citation needed]

In Cameroon, where gorilla populations are especially endangered, the Wildlife Protectors Fund launched an education campaign to teach children about Koko the gorilla, who is part of a long-term psychology experiment in an American research sanctuary.[citation needed]

Logging concessions operated by companies in African forests have been closely linked to the bushmeat trade. Because they provide roads, trucks and other access to remote forests, they are the primary means for the transportation of hunters and meat between forests and urban centres. Some, including the Congolaise Industrielle du Bois (CIB) in Republic of Congo, have partnered with governments and international conservation organizations to regulate the bushmeat trade within the concessions where they operate. Numerous solutions are needed; because each country has different circumstances, traditions and laws, no one solution will work in every location.[citation needed]

In late 2014, the fear of contracting the Ebola virus disease from bush meat, led at least one major Nigerian newspaper to imply that eating dog meat was a healthy alternative.[7]

Some species are legal to hunt and not endangered, and others not so. Only about 1% of the bushmeat trade is in ape meat.[citation needed] However, the apes' small numbers and the attractiveness of hunting them (being a large animal, a gorilla can offer a good payoff for each cartridge) means the impact on hunting them is considerable. Orphans of the bushmeat trade are often sold as pets, as young apes do not have enough meat on them to eat. The Pan African Sanctuary Alliance (PASA) is a member organization of sanctuaries that provide care for bushmeat orphans and education for local communities.

Armed conflict has a direct impact on the killing of great apes for bushmeat. This is largely because of the breakdown of law and order[citation needed]. A well-documented case was the killing and eating of mountain gorillas during the military insurrection around Virunga National Park in the eastern Democratic Republic of Congo in January 2007.[citation needed]

Apes reproduce relatively slowly, at about one-fourth the rate of most other mammals.[citation needed] A study in Gabon, the wealthiest country in the region, with 80% of its forest cover still in place, showed it had suffered at least a 56% decline in its ape population over 17 years.[citation needed]

Role in spread of diseases

The primary concern with the preparation and consumption of bushmeat is zoonosis. Zoonosis is the transfer of a virus or pathogen from one species to another. The Ebola virus disease, for instance, has been found in fruit bats, primates, pigs, and dogs. Animals with an active a Ebola viral load are believed to be the source of several outbreaks in humans. Domesticated animals can also be affected by bushmeat. Dogs that lived closest to an Ebola outbreak were more likely to have virus antigens demonstrating that they were at one point infected too.

The bubonic plague bacteria can transfer to humans when handling or eating prairie dogs.[8]

African squirrels (Heliosciurus, Funisciurus) have been implicated as reservoirs of the monkeypox virus in the Democratic Republic of the Congo..[citation needed]

Research has shown that human immunodeficiency virus (HIV), the virus which causes AIDS, originated from a similar virus in primates called simian immunodeficiency virus (SIV); researchers believe that HIV probably initially jumped into humans after people in Africa came into contact with infected bushmeat.[11] There are several distinct strains of HIV, indicating that this cross-species transfer has occurred several times.[12]

In many instances, catching the diseases mentioned above often occurs due to the cutting of the meat, in which animal blood, and other fluids may wind up on the people cutting it, thereby infecting them. Another way that people get infected is due to the fact that some portions of the meat may not be completely cooked. This often occurs due to the type of heating source employed: open fires over which the meat is simply hung.[13]

The bushmeat trade is considered by some antiglobalization activists to be one of many ways in which globalization affects life on the planet, due to the lumber trade (as described in the Factors section above). There is no way (other than by researching the corporations involved, or their countries of origin) to tell which lumber has been produced in a way that assists the hunting of apes, and which has not. It has been suggested that the only way to eliminate the bushmeat trade might be industry-specific protocols, along the lines of the Harkin-Engel Protocol. Although some argue against Western interference with African culture, claiming that the West should take a value-neutral perspective on eating apes, many African cultures greatly respect or fear apes, and frown on their consumption. Some have suggested that the economic incentive to hunt bushmeat has led to an erosion of these traditional values, and that Western interference is therefore appropriate.[5]

A main method on how the decline of wildlife (caused by the consumption of bushmeat) could be stopped is by legalising the sale of the flesh of self-grown local animals, but keeping the sale of the flesh of animals that were shot in the wild illegal. This approach is thus a bit similar as with aquaculture, as by growing the animals in farms, more such food can be produced, while keeping the wild animal population secure. The legalisation of the sale of certain endangered animal species like the tiger has been proposed by economist Barun Mitra.[14]

It has also been proposed by Peter Arcese, an associate professor of forest sciences at the University of British Columbia, that farming infrastructure needs to be created and the international exploitation of African fishing grounds needs to stop. The fishing grounds are being overfished by mainly EU-subsidized fleets and could collapse within a few decades. Reduced fishery landings in Africa increase demand for bushmeat, which is leading many species to face extinction, and a humanitarian crisis could easily follow. In some locations the biomass of mammals in parks has been reduced by 70% since 1967 because of bushmeat harvesting. Since wildlife monitoring is limited to a few countries, the full extent and future outlook of bushmeat is not currently known.[15]

Other causes of wildlife decline

Small villages and indigenous communities in Amazonia, sub-Saharan Africa, and other tropical areas still rely heavily on plants and animals for life's necessities (housing, food, fuel) as they always have. The free availability of forest products has long been a sustainable buffer against poverty in tropical forest communities. But as human populations expand, populations of animals diminish, biodiversity decreases, and this relationship grows less sustainable worldwide. “The sad reality is that those who most depend upon wild sources of food are usually the ones who pay the heaviest price for biodiversity loss,” says Dr Susan Lieberman, Director WWF’s International Species Programme.TRAFFIC: The Wildlife Trade Monitoring Network

A major factor in the decline of tropical wildlife species is the harvesting of wildlife for sale, especially by outsiders. This practice flourishes as transportation to markets becomes easier. The wide availability of modern firearms ensures quick kills at the end of a hunt. New logging roads and motorized boats provide quick transport from deep forests to city markets. Markets in cities along the Amazon and other tropical rivers offer a bounty of forest and river animals, alive and dead, for meat, medicine, pets, or for blackmarket traders who will smuggle live animals into wealthy countries such as the United States for the pet trade or medical research.

Quick links: Medicine Portal | Encyclopedia‏‎‏‎ | Gray's Anatomy‏‎ | Topics‏‎ |‏‎ Diseases‏‎ | Drugs | Wellness | Obesity‏‎ | Metabolic syndrome | Weight loss*
Disclaimer: The entire contents of WIKIMD.ORG are for informational purposes only and do not render medical advice or professional services. If you have a medical emergency, you should CALL 911 immediately! Given the nature of the wiki, the information provided may not be accurate, misleading and or incorrect. Use the information on this wiki at your own risk! See full Disclaimer.
Link to this page: <a href="http://www.wikimd.org/wiki/Bushmeat">Bushmeat</a>