Canavan disease is a gene-linked neurological disorder in which the brain degenerates into spongy tissue riddled with microscopic fluid-filled spaces. 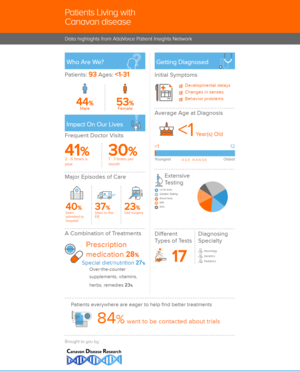 Canavan disease has been classified as one of a group of genetic disorders known as the leukodystrophies.

Recent research has indicated that the cells in the brain responsible for making myelin sheaths, known as oligodendrocytes, cannot properly complete this critical developmental task.  Myelin sheaths are the fatty covering that act as insulators around nerve fibers in the brain, as well as providing nutritional support for nerve cells.  In Canavan disease, many oligodendrocytes do not mature  and instead die, leaving nerve cell projections known as axons vulnerable and unable to properly function.

Canavan disease is caused by mutation in the gene for an enzyme called aspartoacylase, which acts to break down the concentrated brain chemical known as N-acetyl-aspartate.

Although Canavan disease may occur in any ethnic group, it is more frequent among Ashkenazi Jews from eastern Poland, Lithuania, and western Russia, and among Saudi Arabians.

Canavan disease can be identified by a simple prenatal blood test that screens for the missing enzyme or for mutations in the gene that controls aspartoacylase.

Both parents must be carriers of the defective gene in order to have an affected child. When both parents are found to carry the Canavan gene mutation, there is a one in four (25 percent) chance with each pregnancy that the child will be affected with Canavan disease.

The prognosis for Canavan disease is poor. Death usually occurs before age 10, although some children may survive into their teens and twenties.

Canavan disease causes progressive brain atrophy. There is no cure, nor is there a standard course of treatment. Treatment is symptomatic and supportive.

Quick links: Medicine Portal | Encyclopedia‏‎‏‎ | Gray's Anatomy‏‎ | Topics‏‎ |‏‎ Diseases‏‎ | Drugs | Wellness | Obesity‏‎ | Metabolic syndrome | Weight loss*
Disclaimer: The entire contents of WIKIMD.ORG are for informational purposes only and do not render medical advice or professional services. If you have a medical emergency, you should CALL 911 immediately! Given the nature of the wiki, the information provided may not be accurate, misleading and or incorrect. Use the information on this wiki at your own risk! See full Disclaimer.
Link to this page: <a href="http://www.wikimd.org/wiki/Canavan_disease">Canavan disease</a>