A car accident is an incident where an automobile either departs from regular pathway into a ditch, or collides with anything that causes damage to the automobile, including other automobiles, telephone poles, buildings, and trees. Sometimes a car accident may also refer to an automobile striking a human or animal. Car accidents — also called traffic collisions, auto accidents, road accidents, personal injury collisions, motor vehicle accidents, and (particularly by American radio traffic reporters) crashes — kill an estimated 1.2 million people worldwide each year, and injure about forty times this number (WHO, 2004). The term "accident" is considered an inappropriate word by some, as reliable sources estimate that upwards of 90% are the result of driver negligence. In the UK the Department of Transport publish road deaths in each type of car. These statistics are available as "Risk of injury measured by percentage of drivers injured in a two car injury accident."

These statistics show a ten to one ratio of in-vehicle accident deaths between the least safe and most safe models of car.

SUVs are better for their occupants in two-vehicle crashes than 'safety cars', with the Jeep Cherokee and Toyota Land Cruiser giving 2% incidence of occupant death in actual crashes. However, in multiple-vehicle crashes SUVs are probably between three (Bicycle Safety Almanac) and six (International Injury & Fatality Statistics) times more likely to kill the occupant of the other vehicle (car, cyclist, or pedestrian) than cars.

Overall the four best vehicles to be in are the Jaguar XJ series 1%, Mercedes-Benz S-Class / SEC 1%, Land Rover Defender 1% and Land Rover Discovery 1%.

Motorcyclist deaths within England and Wales stand at 53% of the annual road death statistics. Scooters/mopeds up to 50cc only account for 3% of those deaths. 2% of the scooter deaths were 16-19 year olds who had not taken CBT (Compulsory Basic Training). Studies show that the #1 cause of car accidents in North America is automobiles.

The first fatality in a steam-driven vehicle may have been Mary Ward who on 31 August 1869 fell under a steam car in Ireland.

In the UK, the first person to die in a petrol-driven car collision was a pedestrian, Bridget Driscoll, in 1896. The first driver/passenger deaths occurred on 25 February 1899. A 6 HP Daimler, driven by 31-year-old engineer Edwin Sewell, crashed on Grove Hill, a steeply graded road on the northern slope of Harrow on the Hill, Middlesex, now in north-west London. A rear wheel collapsed after breaking its rim and the car hit a sturdy brick wall. Sewell was killed immediately when he and his passenger, a Major Richer, were thrown from the vehicle. Richer died 3 days later in hospital. The spot is now marked with a commemorative plaque.

Car makers have been both accused of making cars that go too fast, and praised for the safety measures (such as ABS) found in new models.

A number of books have critically analysed the responsibility of car makers for safety. The most famous is probably Ralph Nader's Unsafe At Any Speed: The Designed-In Dangers of the American Automobile, and more recently Keith Bradsher's High and Mighty: the dangerous rise of SUVs (in Europe subtitled the world's most dangerous vehicles and how they got that way) has discussed popular concerns with the rise in popularity of the SUV.

Road toll figures show that car collision fatalities have declined since 1980, with most countries showing a reduction of roughly 50%. This drop appears to confirm the efficacy of safety measures introduced thereafter, assuming that driver behaviour has not changed significantly.

It has been noted that road fatality trends closely follow the so-called "Smeed's law" (after RJ Smeed, its author), an empirical rule relating injury rates to the two-thirds power of car ownership levels. Others claim that road safety improvements, not Smeed's law, are the dominant cause of lives saved. An analysis by John Adams can be found here.

Collisions can occur with other automobiles, other vehicles such as bicycles or trucks, with pedestrians or large animals (such as moose), and with stationary structures or objects, such as trees or road signs. 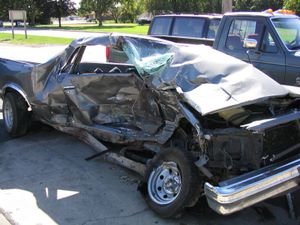 The result of a side collision; most cars are not as structurally sound side-to-side as they are front-to-back and damage can be more severe to the vehicle and the occupant than at the same speed in a rear-end collision.

In a collision between two cars, the occupants of a car with the lower mass will likely suffer the greater consequences. See: crash incompatibility.

Car collisions often carry legal consequences in proportion to the severity of the accident. Nearly all common law jurisdictions impose some kind of requirement that parties involved in a collision (even with only stationary property) must stop at the scene, and exchange insurance or identification information or summon the police. Failing to obey this requirement is referred to as hit and run and is generally a criminal offence. Most car claims are settled without using an attorney.

Parties involved in an accident may face criminal liability, civil liability, or both. Usually, the state starts a prosecution only if someone is severely injured or killed, or if one of the drivers involved was clearly grossly negligent or intoxicated or otherwise impaired at the time the accident occurred. Charges might include driving under the influence of alcohol or drugs, assault with a deadly weapon, manslaughter, or murder; penalties range from fines to jail time to prison time to death (although the death penalty is not applicable in many jurisdictions). It is notable that the penalties for killing and injuring with motor vehicles are often very much less than for other actions with similar outcomes.

As for civil liability, automobile accident personal injury lawsuits have become the most common type of tort. Because these cases have been litigated often in the developed First World nations, the legal questions usually have been answered in prior judgments. So, the courts most usually decide solely the factual questions of who is at fault, and how much they (or their insurer) must pay out in damages to the injured plaintiff.

Another element of liability involves the administrative fines or license suspension/revocation that may be imposed by civil or criminal authorities when a driver has violated the rules of the road and thus the terms of a driver's license. Such complaint may be filed by a police officer or sometimes by other witnesses of an incident.

Rubbernecking is where drivers slow down to look at recent collisions or anything out of the ordinary on the highway. Events ranging from gruesome car accidents to a police car stopped on the shoulder can cause traffic jams on both sides of the road, even if the roadway has been cleared.

Although caution is advised when there is unexpected activity on the side of a road, a car with a flat tire on the side of a highway often causes as much slow down as a real accident would due to rubbernecking. The slowdown in traffic persists even after the accident scene has been cleared if traffic is dense. Traffic experts call this phenomenon a phantom accident. This behaviour can potentially cause additional and sometimes more-serious accidents among the distracted rubberneckers.

Studies have shown some evidence of just how dramatically rubbernecking affects traffic flow, with estimates [1] being as significant as every minute of actual congestion resulting in 10 minutes of flow-on congestion. Such impact is readily observed in the event of a crash on a major arterial route, where traffic backs up on both sides of the road at roughly equal rates.

Backup accidents happen when a driver reverses their car into an object, person, or another car. Although most cars come equipped with rear view mirrors, which are adequate for detecting vehicles behind a car, they are inadequate on many vehicles for detecting small children or objects close to the ground, which fall in the car's blind spot. Large trucks have much larger blind spots that can hide entire vehicles and large adults.

According to research by Kids and Cars – an organization devoted to preventing (non-traffic) motor-vehicle-related deaths and injuries – 49% of the non-traffic, non-crash fatalities involving children under 15 from 2001-2005 were caused by vehicles backing up.

In its “Deaths and Injuries Resulting from Certain Non-Traffic and Non-Crash Events,” report issued in May of 2004, the National Highway Traffic Safety Administration found that back-up accidents most often:

The car backing up and hit an object, a person, or another car is usually considered to be at fault.

Although many accidents are caused by behavior that is difficult to alter, by mechanical failure, or by road conditions, some technical solutions are becoming more widely available to prevent accidents:

In most developed countries, young (under 25 years old) male drivers have been shown to be by far the most likely to be involved in a car accident, and this has become an area of focus. Reasons suggested for this include inexperience combined with over-confidence, peer pressure, a desire to show off, and even neurological development arguments. In addition most serious accidents occur at night and when the car has multiple occupants. This has led to the following proposals:

Some countries or states have already implemented some of these ideas. This increased risk for the young is known to the insurance companies, and premiums reflect that; however, very high premiums for young male drivers do not seem to have had a significant impact on the accident statistics, suggesting that these drivers simply accept the high premiums as part of the "on road" costs of mobility.

Cause of death rank: 5

How to deal with a car accident

Right after the accident, you should:

After an accident, you and your parents or guardian should:

Quick links: Medicine Portal | Encyclopedia‏‎‏‎ | Gray's Anatomy‏‎ | Topics‏‎ |‏‎ Diseases‏‎ | Drugs | Wellness | Obesity‏‎ | Metabolic syndrome | Weight loss*
Disclaimer: The entire contents of WIKIMD.ORG are for informational purposes only and do not render medical advice or professional services. If you have a medical emergency, you should CALL 911 immediately! Given the nature of the wiki, the information provided may not be accurate, misleading and or incorrect. Use the information on this wiki at your own risk! See full Disclaimer.
Link to this page: <a href="http://www.wikimd.org/wiki/Car_accident">Car accident</a>