From WikiMD
Share
Not to be confused with Catalepsy.

Cataplexy is a sudden and transient episode of muscle weakness accompanied by full conscious awareness, typically triggered by emotions such as laughing, crying, or terror.[1] Cataplexy affects approximately 70% of people who have narcolepsy,[2] and is caused by an autoimmune destruction of hypothalamic neurons that produce the neuropeptide hypocretin (also called orexin), which regulates arousal and has a role in stabilisation of the transition between wake and sleep states.[3] Cataplexy without narcolepsy is rare and the cause is unknown.

The term cataplexy originates from the Greek κατά (kata, meaning "down"), and πλῆξις (plak, meaning "strike")[4] and it was first used around 1880 in German physiology literature to describe the phenomenon of tonic immobility also known as «playing possum». This animal is able to feign death when it is threatened.[4] In the same year the French neuropsychiatrist Jean-Baptiste Gélineau coined the term 'narcolepsy' and published some clinical reports that contain details about two patients who have similar condition as the narcoleptic cases nowadays.[5] Nevertheless the onset reported by him was in adulthood as compared to the nowadays cases reported in childhood and adolescent.[6] Even if he preferred the term ‘astasia’ instead of ‘cataplexy’ the case described by him remained iconic for the full narcoleptic syndrome.[4]

Cataplexy manifests itself as muscular weakness which may range from a barely perceptible slackening of the facial muscles to complete muscle paralysis with postural collapse.[7] Attacks are brief, most lasting from a few seconds to a couple of minutes, and typically involve dropping of the jaw, neck weakness, and/or buckling of the knees. Even in a full-blown collapse, people are usually able to avoid injury because they learn to notice the feeling of the cataplectic attack approaching and the fall is usually slow and progressive.[8] Speech may be slurred and vision may be impaired (double vision, inability to focus), but hearing and awareness remain normal.

Cataplexy attacks are self-limiting and resolve without the need for medical intervention. If the person is reclining comfortably, he or she may transition into sleepiness, hypnagogic hallucinations, or a sleep-onset REM period. While cataplexy worsens with fatigue, it is different from narcoleptic sleep attacks and is usually, but not always, triggered by strong emotional reactions such as laughter, anger, surprise, awe, and embarrassment, or by sudden physical effort, especially if the person is caught off guard.[9] One well known example of this was the reaction of 1968 Olympic long jump medalist Bob Beamon on understanding that he had broken the previous world record by over 0.5 meters (almost 2 feet).[10][additional citation(s) needed][medical citation needed] Cataplectic attacks may occasionally occur spontaneously, with no identifiable emotional trigger.[11] 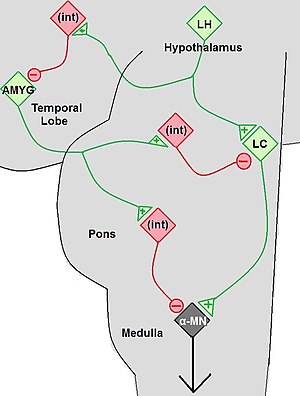 In this simplified brain circuit, damage to orexin-secreting neurons in the hypothalamus can lead to inhibition of motor neurons, thus lowering muscle tone.

Cataplexy is considered secondary when it is due to specific lesions in the brain that cause a depletion of the hypocretin neurotransmitter. Secondary cataplexy is associated with specific lesions located primarily in the lateral and posterior hypothalamus. Cataplexy due to brainstem lesions is uncommon particularly when seen in isolation. The lesions include tumors of the brain or brainstem and arterio-venous malformations. Some of the tumors include astrocytoma, glioblastoma, glioma, and subependynoma. These lesions can be visualized with brain imaging, however in their early stages they can be missed. Other conditions in which cataplexy can be seen include ischemic events, multiple sclerosis, head injury, paraneoplastic syndromes, and infections such as encephalitis. Cataplexy may also occur transiently or permanently due to lesions of the hypothalamus that were caused by surgery, especially in difficult tumor resections. These lesions or generalized processes disrupt the hypocretin neurons and their pathways. The neurological process behind the lesion impairs pathways controlling the normal inhibition of muscle tone drop, consequently resulting in muscle atonia.[12]

A phenomenon of REM sleep, muscular paralysis, occurs at an inappropriate time. This loss of tonus is caused by massive inhibition of motor neurons in the spinal cord. When this happens during waking, the victim of a cataplectic attack loses control of his or her muscles. As in REM sleep, the person continues to breathe and is able to control eye movements.[9]

The hypothalamus region of the brain regulates basic functions of hormone release, emotional expression and sleep. A study in 2006 in "Tohoku Journal of Experimental Medicine" concluded that the neurochemical hypocretin, which is regulated by the hypothalamus, was significantly reduced in study participants with symptoms of cataplexy. Orexin, also known as Hypocretin, is a primary chemical important in regulating sleep as well as states of arousal. Hypocretin deficiency is further associated with decreased levels of histamine and epinephrine, which are chemicals important in promoting wakefulness, arousal and alertness.[13]

The diagnosis of narcolepsy and cataplexy is usually made by symptom presentation. Presenting with the tetrad of symptoms (Excessive daytime sleepiness, sleep onset paralysis, hypnagogic hallucinations, cataplexy symptoms) is strong evidence of the diagnosis of narcolepsy. A Multiple Sleep Latency Test (MSLT) is often conducted in order to quantify daytime sleepiness.[14]

Cataplexy is treated with medications. The treatments for narcolepsy and cataplexy can be divided in treatments that act on the excessive daytime sleepiness (ESD) and those which improve the cataplexy. For most of the patients this will represent a lifelong medication.[15] Nevertheless most of the treatments in humans will act only symptomatically and do not target the loss of the orexin producing neurons.[16]

When treating cataplexy, all three systems: adrenergic, cholinergic and dopaminergic must be considered. In the studies made both in vitro and in vivo it was proven that the adrenergic system can be inhibited by the antidepressants. In the mouse models the cataplexy is regulated by the dopaminergic system via the D2-like receptor, which blocked decreases the cataplexic attacks. The cholinergic system was also observed in the animal models, and it was suggested that stimulations of this system led to severe cataplexy episodes in canine model.[17]

There are no behavioral treatments. People with narcolepsy will often try to avoid thoughts and situations that they know are likely to evoke strong emotions because they know that these emotions are likely to trigger cataplectic attacks.[9]

Gamma-hydroxybutyrate (GHB, also known as Sodium oxybate) has been found to be effective at reducing the number of cataplexy episodes.[18][19] Sodium oxybate is generally safe [19] and is typically the recommended treatment.[20]

Sodium oxybate (GHB) is a natural metabolite of GABA. Its main target is the dopaminergic system because at pharmacological concentration it acts as a agonist and modulates the dopamine neurotransmitters and dopaminergic signalling.[17] GHB was used to treat narcolepsy and cataplexy for more than 15 years[4] and it is the only drug authorised by the EMA to treat the whole disease in adults, and by FDA to treat patients which suffer from cataplexy with the indication to be used for combating excessive daytime sleepiness.[20] This drug helps to normalise the sleep architecture pushing the REM sleep toward its normal setting and inhibits the intrusion during the day of its elements like the paralysis in cataplexy.[4]

If the above treatment is not possible venlafaxine is recommended.[20] Evidence for benefit is not as good.[20]

Previous treatments include tricyclic antidepressants such as imipramine, clomipramine or protriptyline.[8] Monoamine oxidase inhibitors may be used to manage both cataplexy and the REM sleep-onset symptoms of sleep paralysis and hypnagogic hallucinations.[21]

In the clinical practice, venlafaxine (doses 75–225 mg daily) or clomipramine (25–100 mg daily) are the most common antidepressants used to treat cataplexy. If the patient wishes to have a sedative effect then clomipramine is prescribed. The effect of this drugs is to suppress the REM component and to increase the brainstem monoaminergic levels.[4] The venlafaxine is a norepinephrine and serotonin reuptake inhibitor whereas the clomipramine is a tricyclic antidepressant. Their effects can be seen within 48 hours after the drug is administrated and at doses smaller than the ones used in depression.[17] Nevertheless the EMA and the FDA do not approve this antidepressants for the treatment of cataplexy.[20] Frequently, tolerance is developed by the patients and typically the risk of cataplexy rebound or “status cataplecticus” appears when their intake is abruptly interrupted.[17]

Narcolepsy with cataplexy is considered an autoimmune-mediated disorder so, some therapies based on this hypothesis were developed. The immune-based therapies developed were more or less effective and include:[20]

The histaminergic neurons have a very important role in preserving consciousness and in helping maintain the wakefulness and remain active during cataplexy. In the narcolepsy, it seems to be an increase in these neurons, supposing to compensate for hypocretin loss.[22] A promising therapy would be to increase the activation of histaminergic neurons by an inverse agonist of the histamine H3 receptor, which enhances the histamine release in hypothalamus.[17] An inverse agonist of the histamine H3 is Pitolisant.[23] Results after drug testing on animals have indicated increased wakefulness in normal animals, decreased the sleepiness and blocked the abnormal transitions from REM sleep to awake state in the hypocretin knock-out mice.[17] Also placebo-controlled studies suggest some positive effects of Pitolisant on cataplexy symptoms increasing the levels of alertness and wakefulness.[4]

Research is being conducted on hypocretin gene therapy and hypocretin cell transplantation for narcolepsy-cataplexy.[24][25]

Lua error in Module:Navbox at line 7: attempt to index a boolean value.

Quick links: Medicine Portal | Encyclopedia‏‎‏‎ | Gray's Anatomy‏‎ | Topics‏‎ |‏‎ Diseases‏‎ | Drugs | Wellness | Obesity‏‎ | Metabolic syndrome | Weight loss*
Disclaimer: The entire contents of WIKIMD.ORG are for informational purposes only and do not render medical advice or professional services. If you have a medical emergency, you should CALL 911 immediately! Given the nature of the wiki, the information provided may not be accurate, misleading and or incorrect. Use the information on this wiki at your own risk! See full Disclaimer.
Link to this page: <a href="http://www.wikimd.org/wiki/Cataplexy">Cataplexy</a>