Chancroid is a bacterial infection that is spread through sexual contact. It is caused by a type of bacteria called Haemophilus ducreyi. Chancroid is characterized by a small bump on the genital which becomes a painful ulcer. Men may have just one ulcer, but women often develop four or more. About half of the people who are infected with a chancroid will develop enlarged inguinal lymph nodes, the nodes located in the fold between the leg and the lower abdomen. In some cases, the nodes will break through the skin and cause draining abscesses. The swollen lymph nodes and abscesses are often called buboes. 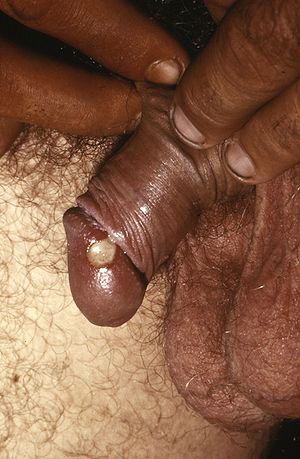 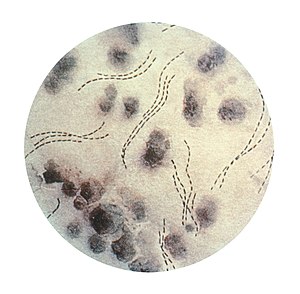 Chancroid is caused by the bacterium Haemophilus ducreyi and results in painful, superficial ulcers, often with regional lymphadenopathy.

Within 1 day to 2 weeks after becoming infected, a person will get a small bump on the genitals. The bump becomes an ulcer within a day after it first appears. The ulcer:

Common locations in men are:

In women, the most common location for ulcers is the outer lips of the vagina (labia majora). "Kissing ulcers" may develop. Kissing ulcers are those that occur on opposite surfaces of the labia. Other areas, such as the inner vagina lips (labia minora), the area between the genitals and the anus (perineal area), and the inner thighs may also be involved. The most common symptoms in women are pain with urination and intercourse. The ulcer may look like the sore of primary syphilis (chancre). About one half of the people who are infected with a chancroid develop enlarged lymph nodes in the groin. In one half of people who have swelling of the groin lymph nodes, the nodes break through the skin and cause draining abscesses. The swollen lymph nodes and abscesses are also called buboes.

From bubo pus or ulcer secretions, H. ducreyi can be identified using special culture media; however, there is a <80% sensitivity. PCR-based identification of the organisms is available, but none in the United States are FDA-cleared. Simple, rapid, sensitive and inexpensive antigen detection methods for H. ducreyi identification are also popular. Serologic detection of H. ducreyi uses outer membrane protein and lipooligosaccharide. Most of the time, the diagnosis is based on presumptive approach using the symptomatology which in this case includes multiple painful genital ulcers. Instead of laboratory diagnosis, a presumptive clinical diagnosis can be made if all of the following are present:

Despite many distinguishing features, the clinical spectrums of following diseases may overlap with chancroid:

Chancroid infections can be treated with antibiotics, including azithromycin, ceftriaxone, ciprofloxacin, and erythromycin. Large lymph node swellings need to be drained, either with a needle or local surgery.

Chancroid can get better on its own. Some people have months of painful ulcers and draining. Antibiotic treatment often clears up the lesions quickly with very little scarring.

Chancroid spreads in populations with high sexual activity, such as prostitutes. Use of condom, prophylaxis by azithromycin, syndromic management of genital ulcers, treating patients with reactive syphilis serology are some of the strategies successfully tried in Thailand. Also, treatment of sexual partners is advocated whether they develop symptoms or not as long as there was unprotected sexual intercourse with the patient within 10 days of developing the symptoms.

Chancroid is a rare disease.

Help WikiMD:Join WikiMD as an an editor and help improve the page Chancroid or others.

Quick links: Medicine Portal | Encyclopedia‏‎‏‎ | Gray's Anatomy‏‎ | Topics‏‎ |‏‎ Diseases‏‎ | Drugs | Wellness | Obesity‏‎ | Metabolic syndrome | Weight loss*
Disclaimer: The entire contents of WIKIMD.ORG are for informational purposes only and do not render medical advice or professional services. If you have a medical emergency, you should CALL 911 immediately! Given the nature of the wiki, the information provided may not be accurate, misleading and or incorrect. Use the information on this wiki at your own risk! See full Disclaimer.
Link to this page: <a href="http://www.wikimd.org/wiki/Chancroid">Chancroid</a>