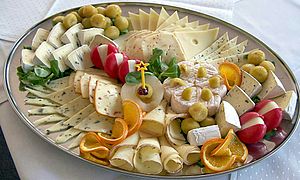 A platter with cheese and garnishes 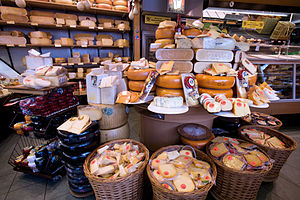 A variety of cheeses for sale in Amsterdam.

Cheese is a food derived from milk that is produced in a wide range of flavors, textures, and forms by coagulation of the milk protein casein.

The basic components of milk, cheese’s basic ingredient, are moisture, lactose, various proteins, and milk fat. In the process of cheese making, several of the proteins are coagulated and, along with the milk fat, are concentrated into a curd mass. Moisture, other proteins, and any lactose remaining after culturing, are drained away from the curds as whey. Typically, sodium chloride (salt) is added to the curd which is processed further with a variety of steps and converted to a finished cheese.

Many types of cheese have large numbers of favorable bacteria present, which is why cheese is often referred to as a living food. The number and types of bacteria can change as a cheese is processed or ripened.

Along with the characteristics of the milk used to make it​, it’s the processing and ripening steps that make a particular type of cheese unique. Some varieties are so unique that they are defined in Wisconsin statute: Brick or Muenster, cheddar, Colby, granular, Monterey, Swiss and washed curd. Federal standards of identity go even farther – there are 72 standardized cheese types or products, ranging from Asiago to Swiss

Cheeses can be broadly grouped into the categories of natural cheese, process (or processed) cheese, pasteurized process cheese, cheese food, and cheese spreads. Each of these broad categories must be labeled with an accurate product name and ingredient list.

A natural cheese does not have ingredients added after the curd-salting step and, with the exception of the pulled-curd types such as Mozzarella and Provolone, undergoes no high-heat processing after the curds are formed. The name of a natural cheese will appear as the variety, such as “Cheddar cheese,” “Swiss cheese,” or “Blue cheese.”

Process cheese, pasteurized process cheese, and related products are mixtures of various cheeses and emulsifying agents which are generally melted to combine the ingredients and provide good shelf life. There are federal standards of identity for several of these products; these standards specify which additional dairy ingredients and emulsifying agents are permissible, what fat and moisture contents are allowed in the finished product, and the minimum time and temperature allowed when the product is pasteurized.

Cheddar cheese is cheese made by the cheddaring process or by another procedure which produces a finished cheese having the same physical and chemical properties as the cheese produced by the cheddar process and is made from cow's milk with or without the addition of coloring matter and with common salt, contains not more than 39 percent of moisture, and in the water-free substance, contains not less than 50 percent of milkfat

Portions of content adapted from Wikipedia's article on Cheese which is released under the CC BY-SA 3.0.

^Cheese (article) is provided for informational purposes only. No expressed or implied warranties as to the validity of content.
WikiMD is not a substitute for professional advice. By accessing and using WikiMD you agree to the terms of use.
Templates etc. when imported from Wikipedia, are licensed under CC BY-SA 3.0. See full disclaimers.
Retrieved from "http://www.wikimd.org/wiki/index.php?title=Cheese&oldid=2370408"
Categories: