From WikiMD's free health, diet & wellness encyclopedia
(Redirected from CoAprovel)
Jump to navigation Jump to search
Share
This page contains changes which are not marked for translation.
Other languages:
English

Irbesartan is an angiotensin II receptor blocker used alone or in combination with other agents in the therapy of hypertension and diabetic nephropathy. 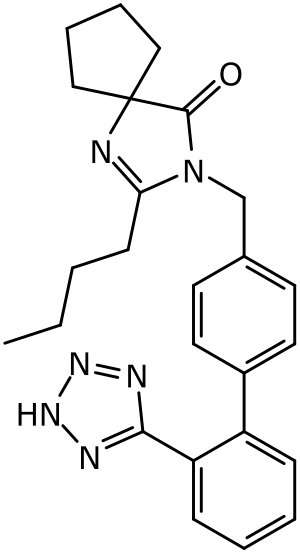 Irbesartan is associated with a low rate of transient serum aminotransferase elevations and has been linked to rare instances of acute liver injury.

Mechanism of action of Irbesartan

Irbesartan (ir" be sar' tan) was the third angiotensin II receptor blocker (ARB) to be approved for use in the United States and is still widely used for therapy of hypertension. Irbesartan inhibits the renin-angiotensin system by blocking the angiotensin II type 1 receptor (AT1), which prevents the vasoconstriction and volume expansion induced by circulating angiotensin II and which accounts of its antihypertensive activity.

Mechanism of action of Irbesartan

Irbesartan was approved for use in the United States in 1997 for hypertension and indications were subsequently expanded to include diabetic nephropathy.

Dosage and administration for Irbesartan

Side effects of Irbesartan

Side effects are uncommon, but can include headache, dizziness, fatigue, cough and gastrointestinal upset. Many ARBs, but not specifically ibresartan, have been implicated in rare instances of a severe sprue-like enteropathy that presents with chronic diarrhea and weight loss with villous flattening and atrophy on intestinal biopsy. This syndrome does not improve to corticosteroids or to a gluetn-free diet, but does resolve promptly with stopping the angiotensin receptor blocker. This side effect is most common with olmesartan.

The common ARBS are the following:

Common ACE inhibitors include the following:

This WikiMD article Irbesartan is a stub.
If you are a healthcare professional familiar with the topic Irbesartan, or
A subject matter expert or authority on Irbesartan, you can help us.
About | Mission | Paid editors welcome!