The term “Valley fever” usually refers to Coccidioides infection in the lungs, but the infection can spread to other parts of the body in severe cases (this is called “disseminated coccidioidomycosis”). 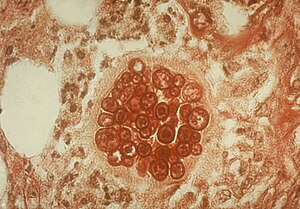 Skin lesions due to Coccidioides immitis

Symptoms of Valley fever include:

In extremely rare cases, the fungal spores can enter the skin through a cut, wound, or splinter and cause a skin infection.

Symptoms of Valley fever may appear between 1 and 3 weeks after a person breathes in the fungal spores.

The symptoms of Valley fever usually last for a few weeks to a few months. However, some patients have symptoms that last longer than this, especially if the infection becomes severe.

Approximately 5 to 10% of people who get Valley fever will develop serious or long-term problems in their lungs. In an even smaller percent of people (about 1%), the infection spreads from the lungs to other parts of the body, such as the central nervous system (brain and spinal cord), skin, or bones and joints. 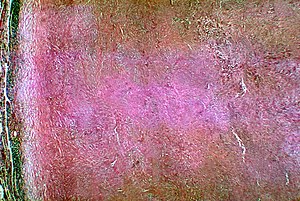 People in endemic areas, particularly those who have occupations or participate in activities exposing them to dust (e.g., construction or agricultural workers, archaeologists, and military trainees). Risk factors for severe or disseminated coccidioidomycosis include African-American race 14 or Filipino ethnicity, HIV/AIDS, use of immunosuppressive medications, 17 organ transplant, 18 diabetes mellitus, or pregnancy.

Serologic tests to detect IgM and IgG antibodies are most often used to diagnose coccidioidomycosis. Other methods include culture and microscopy.

In persons who develop progressive, chronic, or disseminated disease, symptoms may persist for months or even longer. Meningitis can lead to permanent neurologic damage. Mortality is high in HIV-infected persons with diffuse lung disease.

Anyone who lives in or travels to the southwestern United States (Arizona, California, Nevada, New Mexico, Texas, or Utah), or parts of Mexico or Central or South America can get Valley fever. Valley fever can affect people of any age, but it’s most common in adults aged 60 and older. Certain groups of people may be at higher risk for developing the severe forms of Valley fever as noted below.

People who have weakened immune systems, such as:

It’s very difficult to avoid breathing in the fungus Coccidioides in areas where it’s common in the environment.

Join WikiMD as a freelancer or paid editor and help improve the page Coccidioidomycosis or others.
Retrieved from "http://www.wikimd.org/wiki/index.php?title=Coccidioidomycosis&oldid=2157714"
Categories: