Xeroderma pigmentosum (XP) causes the skin and eyes to be extra sensitive to exposure to ultraviolet radiation from the sun and other sources. Symptoms begin in early childhood. People with XP can develop bad sunburns, blistering, and freckling in response to sunlight. The eyes may develop light sensitivity, corneal clouding, and swelling. Some people with XP have nervous system involvement as well. People with XP are at very high risk of developing skin and other cancers. XP is caused by variants in one of at least nine genes involved in repairing damaged DNA. XP is inherited in an autosomal recessive pattern. Diagnosis is based on the clinical findings, specialized testing on skin cells, and can be confirmed by the results of genetic testing. Treatment is focused on managing the symptoms. This includes avoiding sun exposure and frequent screenings for skin and other cancers.

The following list includes the most common signs and symptoms in people with xeroderma pigmentosum (XP). These features may be different from person to person. Some people may have more symptoms than others and symptoms can range from mild to severe. This list does not include every symptom or feature that has been described in this condition. 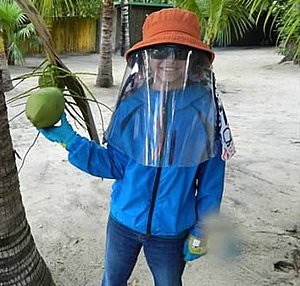 Symptoms of XP may include:

Symptoms of XP start in childhood. Many people with XP develop severe sunburns and blistering with minimal sun exposure. Others may have changes in skin coloring and texture. The eyes can also be damaged because of sun exposure. About one-fourth of people with XP have neurological problems that may get worse over time. People with XP are at very high risk of developing skin and other cancers. Most people with XP will get some type of cancer by early adulthood.

Xeroderma pigmentosum is caused by the DDB2, ERCC1, ERCC2, ERCC3, ERCC4, ERCC5, POLH, XPA, or XPC gene not working correctly. DNA changes known as pathogenic variants are responsible for making genes work incorrectly or sometimes, not at all.

Xeroderma pigmentosum is inherited in an autosomal recessive pattern. All individuals inherit two copies of each gene. Autosomal means the gene is found on one of the numbered chromosomes found in both sexes. Recessive means that both copies of the responsible gene must be altered to have the condition.

Xeroderma pigmentosum (XP) is diagnosed based on the symptoms, clinical exam, and may be confirmed by the results of genetic testing. Specialized testing may be done on skin cells to check for sensitivity to ultraviolet radiation.

Treatment for xeroderma pigmentosum (XP) is focused on managing the symptoms. People with XP are advised to avoid cigarette smoke, sunlight, and other forms of ultraviolet radiation exposure. In addition, people with XP may need regular screening for cancer, which may include a skin biopsy. Clinical guidelines have been published for managing the symptoms of xeroderma pigmentosum.

Specialists involved in the care of someone with XP may include:

It has been estimated that about one in 1,000,000 people in the United States has xeroderma pigmentosum (XP). The number of people with XP is higher in Japan and other parts of the world.

Join WikiMD as a freelancer or paid editor and help improve the page Xeroderma pigmentosum or others.
Retrieved from "http://www.wikimd.org/wiki/index.php?title=Xeroderma_pigmentosum&oldid=2158568"
Categories: