Morphea, is a form of scleroderma that involves isolated patches of hardened skin on the face, hands, and feet, or anywhere else on the body, with no internal organ involvement.[1]:130 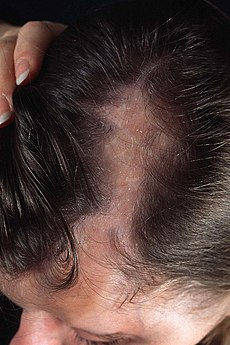 Morphea most often presents as macules or plaques a few centimeters in diameter, but also may occur as bands or in guttate lesions or nodules.[2]:171

Morphea is a thickening and hardening of the skin and subcutaneous tissues from excessive collagen deposition. Morphea includes specific conditions ranging from very small plaques only involving the skin to widespread disease causing functional and cosmetic deformities. Morphea discriminates from systemic sclerosis by its supposed lack of internal organ involvement.[3] This classification scheme does not include the mixed form of morphea in which different morphologies of skin lesions are present in the same individual. Up to 15% of morphea patients may fall into this previously unrecognized category.[4]

Physicians and scientists do not know what causes morphea. Case reports and observational studies suggest there is a higher frequency of family history of autoimmune diseases in patients with morphea.[4] Tests for autoantibodies associated with morphea have shown results in higher frequencies of anti-histone and anti-topoisomerase IIa antibodies.[5] Case reports of morphea co-existing with other systemic autoimmune diseases such as primary biliary cirrhosis, vitiligo, and systemic lupus erythematosus lend support to morphea as an autoimmune disease.[6][7][8]

Borrelia burgdorferi infection may be relevant for the induction of a distinct autoimmune type of scleroderma; it may be called "Borrelia-associated early onset morphea" and is characterized by the combination of disease onset at younger age, infection with B. burgdorferi, and evident autoimmune phenomena as reflected by high-titer antinuclear antibodies.[9] 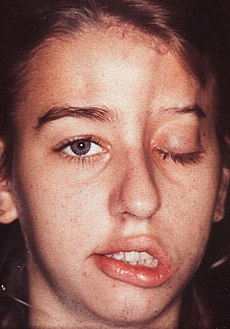 Throughout the years, many different treatments have been tried for morphea including topical, intra-lesional, and systemic corticosteroids. Antimalarials such as hydroxychloroquine or chloroquine have been used. Other immunomodulators such as methotrexate, topical tacrolimus, and penicillamine have been tried. Children and teenagers with active morphea (linear scleroderma, generalised morphea and mixed morphea: linear and circumscribed) may experience greater improvement of disease activity or damage with oral methotrexate plus prednisone than with placebo plus prednisone.[15] Some have tried prescription vitamin-D with success. Ultraviolet A (UVA) light, with or without psoralens have also been tried. UVA-1, a more specific wavelength of UVA light, is able to penetrate the deeper portions of the skin and thus, thought to soften the plaques in morphea by acting in two fashions: by causing a systemic immunosuppression from UV light, or by inducing enzymes that naturally degrade the collagen matrix in the skin as part of natural sun-aging of the skin. [1] However there is limited evidence that UVA‐1 (50 J/cm²), low‐dose UVA‐1 (20 J/cm²), and narrowband UVB differ from each other in effectivness in treating children and adults with active morphea.[15]

Morphea is a form of scleroderma that is more common in women than men, in a ratio 3:1.[16] Morphea occurs in childhood as well as in adult life.[2] Morphea is an uncommon condition that is thought to affect 2 to 4 in 100,000 people.[17] Adequate studies on the incidence and prevalence have not been performed. Morphea also may be under-reported, as physicians may be unaware of this disorder, and smaller morphea plaques may be less often referred to a dermatologist or rheumatologist.[citation needed]

Portions of content adapted from Wikipedia's article on Morphea which is released under the CC BY-SA 3.0.

^Morphea (article) is provided for informational purposes only. No expressed or implied warranties as to the validity of content.
WikiMD is not a substitute for professional advice. By accessing and using WikiMD you agree to the terms of use.
Templates etc. when imported from Wikipedia, are licensed under CC BY-SA 3.0. See full disclaimers.
Retrieved from "http://www.wikimd.org/wiki/index.php?title=Morphea&oldid=2200095"
Categories: