SY-toh-MEH-guh-loh-VY-rus Cytomegalovirus, often abbreviated as CMV, is a herpesvirus that can cause infections, including pneumonia, gastroenteritis, encephalitis, retinitis especially, in immunosuppressed people. 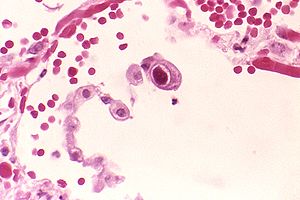 The causal agent, cytomegalovirus or CMV is a member of the herpesvirus family, which includes herpes simplex virus types 1 and 2, varicella-zoster virus, and Epstein-Barr virus.

These viruses share a characteristic ability to establish lifelong latency. After initial infection, which may cause few symptoms CMV becomes latent, residing in cells without causing detectable damage or illness.

Although CMV can infect most organs of the body, HIV-infected people are most susceptible to CMV retinitis.

A virus that may be carried in an inactive state for life by healthy individuals.

In some cases, infection in healthy people can cause mild illness that may include: 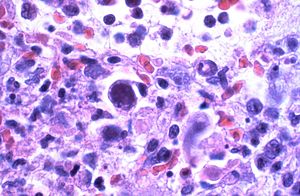 Mononucleosis and or hepatitis

Occasionally, CMV can cause mononucleosis or hepatitis. 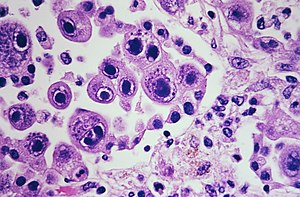 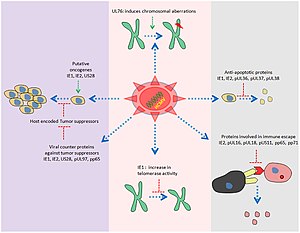 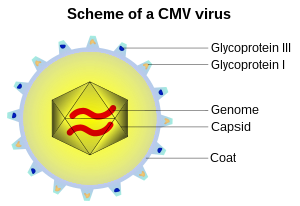 CMV is common in children and can be found in especially high amounts in young children’s saliva and urine. Avoiding contact with saliva and urine from young children might reduce the risk of CMV infection. Healthcare providers should follow standard precautions. Vaccines are still in the research and development stage.

^Cytomegalovirus (article) is provided for informational purposes only. No expressed or implied warranties as to the validity of content.
WikiMD is not a substitute for professional advice. By accessing and using WikiMD you agree to the terms of use.
Templates etc. when imported from Wikipedia, are licensed under CC BY-SA 3.0. See full disclaimers.
Retrieved from "http://www.wikimd.org/wiki/index.php?title=Cytomegalovirus&oldid=2153136"
Categories: