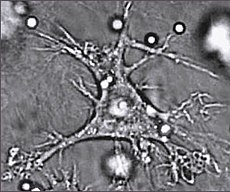 Dendritic cells are present in tissues in contact with the external environment. These tissues are the skin, and the inner lining of the nose, lungs, stomach and intestines. They can also be found in an immature state in the blood.

Dedritic cells develop from monocytes, white blood cells which circulate in the body. Depending on the signal, monocytes turn into either dendritic cells or macrophages. The monocytes are formed from stem cells in the bone marrow.

Immature dendritic cells constantly sample their surrounds for pathogens such as viruses and bacteria. This is done through pattern recognition receptors (PRRs) such as the toll-like receptors (TLRs).

They eat pathogens and break down their proteins into small pieces and put these fragments on their cell surface using MHC molecules. Once activated, these cells move to the lymph nodes and become mature.[1] They switch on cell-surface receptors which activate T cells and B cells to start and shape the adaptive immune response.

Dendritic cells were first described by Paul Langerhans (Langerhans cells) in the late nineteenth century. It wasn't until 1973, however, that Ralph Steinman and Zanvil Cohn gave them the name 'dendritic cells'.[2] For discovering the central role of dendritic cells in the adaptive immune response,[3] Steinman was awarded the Albert Lasker Award in 2007,[4] and the Nobel Prize in Physiology or Medicine in 2011.[5]

Quick links: Medicine Portal | Encyclopedia‏‎‏‎ | Gray's Anatomy‏‎ | Topics‏‎ |‏‎ Diseases‏‎ | Drugs | Wellness | Obesity‏‎ | Metabolic syndrome | Weight loss*
Disclaimer: The entire contents of WIKIMD.ORG are for informational purposes only and do not render medical advice or professional services. If you have a medical emergency, you should CALL 911 immediately! Given the nature of the wiki, the information provided may not be accurate, misleading and or incorrect. Use the information on this wiki at your own risk! See full Disclaimer.
Link to this page: <a href="http://www.wikimd.org/wiki/Dendritic_cell">Dendritic cell</a>