The vesicular monoamine transporter type 2 (VMAT2) inhibitors are agents that cause a depletion of neuroactive peptides such as dopamine in nerve terminals and are used to treat chorea due to neurodegenerative diseases (such as Huntington disease or Hungtington chorea) or dyskinesias due to neuroleptic medications (tardive dyskinesia). As of 2019, three VMAT2 inhibitors have become available in the United States for management of dyskinesia syndromes, each with a somewhat different spectrum of approved indications: tetrabenazine (Xenazine and generics: 2008), deutetrabenazine (Austedo: 2017) and valbenazine (Ingressa: 2017). 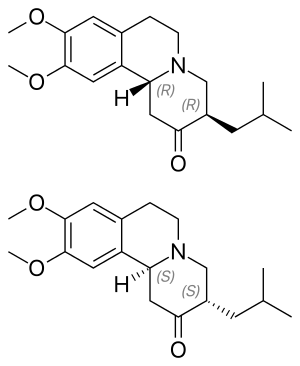 The VMAT2 inihibitors have not been associated with serum enzyme elevations during therapy or linked to instances of clinically apparent liver injury, but they have had limited general clinical use.

Mechanism of action of Tetrabenazine

Tetrabenazine (tet" ra ben' a zeen) is an inhibitor of synaptic vesicular monoamine transporter 2 (VMAT2), the inhibition of which causes a depletion of neuroactive monoamines (serotonin, norepinephrine and particularly dopamine) in nerve terminals. The reduction in these active neurotransmitters results in a decrease in spontaneous jerk-like movements of the extremities, trunk, face and neck (chorea) that are typical of patients with degenerative neurologic conditions such as Huntington disease. Tetrabenazine, however, does not prevent the progression or alter the outcome of these diseases.

Tetrabenazine was approved by the FDA in 2008 as an orphan disease agent for treatment of the chorea associated with Huntington disease. While it is used off-label to treat other abnormal movement disorders, tetrabenazine is not formally approved for those indications.

Dosage and administration for Tetrabenazine

Tetrabenazine is available as tablets of 12.5 and 25 mg generically and under the brand name Xenazine. The recommended initial dose is 12.5 mg once daily, with subsequent careful increase to a maximum of 50 mg given in three divided doses daily. Because of the variable metabolism of tetrabenazine (by CYP 2D6), the maintenance dose varies by individual, and inducers or inhibitors of CYP 2D6 should be avoided. Poor CYP 2D6 metabolizers may require even higher doses.

Side effects of Tetrabenazine

This WikiMD article Tetrabenazine is a stub.
If you are a healthcare professional familiar with the topic Tetrabenazine, or
A subject matter expert or authority on Tetrabenazine, you can help us.
About | Mission | Paid editors welcome!