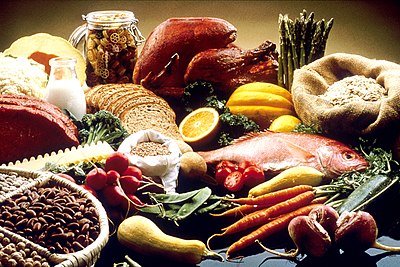 Diabetic diet refers to the diet that is recommended for sufferers of diabetes mellitus. There is much controversy regarding what that diet should consist of. The diet most often recommended is high in dietary fiber, especially soluble fiber, but low in fat (especially saturated fat) and low in sugar. Recommendations of the fraction of total calories to be obtained from carbohydrate are generally in the range of 40 to 65%, but recommendations can vary as widely as from 16 to 75% .[1] Diabetics may be encouraged to reduce their intake of carbohydrates that have a high glycemic index (GI), although this is also controversial.[2] (In cases of hypoglycemia, they are advised to have food or drink that can raise blood glucose quickly, such as lucozade, followed by a long-acting carbohydrate (such as rye bread) to prevent risk of further hypoglycemia.) However, others question the usefulness of the glycemic index and recommend high-GI foods like potatoes and rice. It has been claimed that oleic acid has a slight advantage over linoleic acid in reducing plasma glucose.[3]

There has been long history of dietary treatment of diabetes mellitus – dietary treatment of diabetes mellitus was used in Egypt as long ago as 3,500 B.C., and was used in India by Sushruta and Charaka more than 2000 years ago. In the eighteenth century, John Rollo argued that calorie restriction in the diabetic diet could reduce glycosuria in diabetes. However, more modern history of the diabetic diet may begin with Frederick Madison Allen, who, in the days before insulin was discovered, recommended that people with diabetes ate only a low-calorie diet to prevent ketoacidosis from killing them. This was an approach which did not actually cure diabetes, it merely extended life by a limited period. The first use of insulin by Frederick Banting in 1922 changed things, and at last allowed patients more flexibility in their eating.

In the 1950s, the American Diabetes Association, in conjunction with the U.S. Public Health Service, introduced the "exchange scheme". This allowed people to swap foods of similar nutritional value (e.g. carbohydrate) for another, so, for example, if wishing to have more than normal carbohydrates for dessert, one could cut back on potatoes in one's first course. The exchange scheme was revised in 1976, 1986 and 1995.[4]

However, not all diabetes dietitians today recommend the exchange scheme. Instead, they are likely to recommend a typical healthy diet: one high in fiber, with a variety of fruit and vegetables, and low in both sugar and fat, especially saturated fat. A diet that is high in plant fibre was recommended by James Anderson (Anderson & Ward, 1979; cited in Murray & Pizzorno, 1990). This may be understood as continuation of the work of Denis Burkitt and Hugh Trowell on dietary fibre,[5] which in turn, may be understood as a continuation of the work of Price (Murray & Pizzorno, 1990). It is still recommended that diabetics consume a diet that is high in dietary fiber.

In 1976, Nathan Pritikin opened a centre where patients were put on programme of diet and exercise (the Pritikin Program). This diet is high on carbohydrates and fibre, with fresh fruit, vegetables, and whole grains. A study at UCLA in 2005 showed that it brought dramatic improvement to a group of diabetics and pre-diabetics in only three weeks, so that about half no longer met the criteria for the disease.[6][7][8][9]

On the other hand, in 1983, Dr Richard K. Bernstein began treating diabetics and pre-diabetics successfully with a very low carbohydrate diet, avoiding fruit, added sugar, and starch. Both the Pritikin approach and the Bernstein approach prescribe exercise.

An approach that has been popular with some Type One diabetics since 2000 is known as DAFNE (Dose Adjustment for Normal Eating). This approach involves estimating how much carbohydrates there will be in a meal and modifying the amount of insulin one injects before meal accordingly. An equivalent approach has for Type Two diabetics is known as DESMOND, which stands for Diabetes Education and Self-Management for On-Going and Newly Diagnosed (diabetics). DAFNE has its own newsletter and has received recommendation.[10]

The American Diabetes Association in 1994 recommended that 60–70% of caloric intake should be in the form of carbohydrates. As mentioned above, this is controversial, with some researchers claiming that 40%[11] or even less is better, while others claim benefits for a high-fiber, 75% carbohydrate diet.[12]

An article summarizing the view of the American Diabetes Association[13] contains the statement: "Sucrose-containing foods can be substituted for other carbohydrates in the meal plan or, if added to the meal plan, covered with insulin or other glucose-lowering medications. Care should be taken to avoid excess energy intake." Sucrose does not increase glycemia more than the same number of calories taken as starch[citation needed]. It is not recommended to use fructose as a sweetener. Benefits may be obtained by consumption of dietary fibre in conjunction with carbohydrate; as Francis (1987) points out, evidence suggests that carbohydrate consumed with dietary fiber will have a less major impact on glycemic rise than the same amount of carbohydrate consumed alone.

Despite a common belief that table sugar contributes to the development of diabetes, it has medium (55–69) glycemic index that actually produces lower blood glucose levels than the same number of calories obtained from some other sources of carbohydrates. The Canadian Diabetes Association recommended that table sugar be included as part of the diabetes diet.[14]

Some studies have suggested that adding vinegar to food may help to prevent carbohydrates putting up blood sugar too dramatically.[15]

Some studies show that a low-carbohydrate diet or low GI diet may be effective in dietary management of type 2 diabetes, as both approaches prevent blood sugars from spiking after eating.[16][17]

Another critic of the ADA program is futurologist and transhumanist Ray Kurzweil, who together with Dr Terry Grossman co-authored Fantastic Voyage: Live Long Enough to Live Forever (published 2004). They describe the ADA guidelines as "completely ineffective". Their observations are that the condition, particularly in its early stages can be controlled through a diet which has sharply reduced carbohydrate consumption. Their guidelines for patients with type 2 diabetes is a diet that includes a reduction of carbohydrates to one sixth of total caloric intake and elimination of high glycemic load carbohydrates. As a previously diagnosed diabetic who no longer has symptoms of the disease, Kurzweil is a firm advocate of this approach. However, Kurzweil's prescription changed somewhat between his 1993 book The 10% Solution for a Healthy Life in which he recommended that only 10% of calories should come from fat, and Fantastic Voyage which recommends 25%.

Based on the evidence that the incidence of diabetes is lower in vegetarians, some studies have investigated vegan interventions.[19][20][21] These studies have shown that a vegan diet may be effective in managing type 2 diabetes.[22][23] Switching diabetics to a vegan diet lowered hemoglobin A1C and LDL levels.[22] A vegan diet may improve blood filterability.[24] Vegan diets may lower advanced glycation endproducts.[25]

Diabetes U.K. state that diabetes should not prevent people from going vegetarian – in fact, it may be beneficial to diabetics to go vegetarian, as this will cut down on saturated fats. Recent evidence suggests that diabetics may benefit from as many as eight portions of fruit and vegetable a day.[citation needed]

Due to their high levels of dietary fibre certain foods are considered particularly beneficial for diabetics such as legumes, nuts, fruits, and vegetables.[26]

For people with diabetes, healthy eating is not simply a matter of "what one eats", but also when one eats. The question of how long before a meal one should inject insulin is asked in Sons ken, Fox and Judd (1998). The answer is that it depends upon the type of insulin one takes and whether it is long, medium or quick-acting insulin. If patients check their blood glucose at bedtime and find that it is low, for example below 6 millimoles per Liter (108 mg/dL), it is advisable that they take some long-acting carbohydrate before retiring to bed to prevent night-time hypoglycemia.

Recently, Diabetes UK have warned against purchase of products that are specially made for people with diabetes, on the grounds that:[27]

It should also be noted that NICE, the National Institute for Health and Clinical Evidence (based in the United Kingdom), advises doctors and other health professionals to "Discourage the use of foods marketed specifically for people with diabetes".[28]

Research has shown the Maitake mushroom (Grifola frondosa) has a hypoglycemic effect, and may be beneficial for the management of diabetes.[29][30][31][32][33][34] The reason Maitake lowers blood sugar is because the mushroom naturally acts as an alpha glucosidase inhibitor.[35] Other mushrooms like Reishi,[36][37] Agaricus blazei,[38][39][40][41] Agrocybe cylindracea[42] and Cordyceps[43][44][45][46][47] have been noted to lower blood sugar levels to a certain extent, although the mechanism is currently unknown.

Moderation is advised with regard to consuming alcohol and the use of some drugs. Alcohol inhibits glycogenesis in the liver and some drugs inhibit hunger symptoms. This, together with impaired judgment, memory and concentration caused by some drugs can lead to hypoglycemia. Diabetics who take insulin or tablets such as sulphonylureas should not, therefore, ever consume alcohol on an empty stomach, but take some starchy food (such as bread or potato crisps) at the same time as consumption of alcohol.[citation needed]

The Pritikin Diet consists of fruit, vegetables, whole grains, and so on, and is high in carbohydrates and roughage. The diet is accompanied by exercise.

G.I. Diet – lowering the glycemic index of one's diet can improve the control of diabetes.[48][49] This includes avoidance of such foods as potatoes cooked in certain ways, and white bread, and instead favoring multi-grain and sourdough breads, legumes and whole grains—foods that are converted more slowly to glucose in the bloodstream.

Low Carb Diet – It has been suggested that the gradual removal of carbohydrates from the diet and replacement with fatty foods such as nuts, seeds, meats, fish, oils, eggs, avocados, olives, and vegetables may help reverse diabetes. Fats would become the primary calorie source for the body, and complications due to insulin resistance would be minimized.[18]

High fiber diet – It has been shown that a high fiber diet works better than the diet recommended by the American Diabetes Association in controlling diabetes, and may control blood sugar levels with the same efficacy as oral diabetes drugs.[50][51][52]

Paleolithic diet – The Paleolithic diet has been shown to improve glucose tolerance in humans with diabetes type 2,[53] humans with ischemic heart disease and glucose intolerance,[54] and in healthy pigs.[55] These are a limited number of studies in a limited number of subjects, but the knowledge about the benefits of the Paleolithic diet in diabetes is emerging. The scientific foundation for the Paleolithic diet and the relationship between what humans eat and diseases of the western world (including diabetes, hypertension, obesity, ischemic heart disease, stroke) is the subject of a comprehensive textbook, which is geared towards both professionals and interested laypeople alike, and which spans over 2000 references.[56]

Quick links: Medicine Portal | Encyclopedia‏‎‏‎ | Gray's Anatomy‏‎ | Topics‏‎ |‏‎ Diseases‏‎ | Drugs | Wellness | Obesity‏‎ | Metabolic syndrome | Weight loss*
Disclaimer: The entire contents of WIKIMD.ORG are for informational purposes only and do not render medical advice or professional services. If you have a medical emergency, you should CALL 911 immediately! Given the nature of the wiki, the information provided may not be accurate, misleading and or incorrect. Use the information on this wiki at your own risk! See full Disclaimer.
Link to this page: <a href="http://www.wikimd.org/wiki/Diabetic_diet">Diabetic diet</a>