Diabetic retinopathy,[1] ([ˌrɛtnˈɑpəθi]) is retinopathy (damage to the retina) caused by complications of diabetes, which can eventually lead to blindness.[2] It is an ocular manifestation of diabetes, a systemic disease, which affects up to 80 percent of all patients who have had diabetes for 10 years or more.[3] Despite these intimidating statistics, research indicates that at least 90% of these new cases could be reduced if there was proper and vigilant treatment and monitoring of the eyes.[4] The longer a person has diabetes, the higher his or her chances of developing diabetic retinopathy.[5] 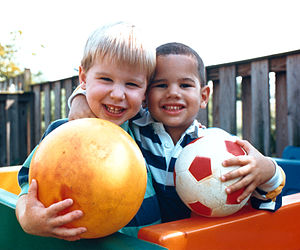 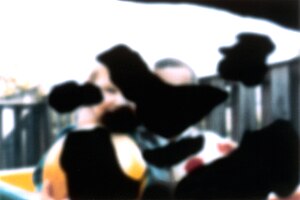 The same view with diabetic retinopathy.

Diabetic retinopathy often has no early warning signs. Even macular edema, which may cause vision loss more rapidly, may not have any warning signs for some time. In general, however, a person with macular edema is likely to have blurred vision, making it hard to do things like read or drive. In some cases, the vision will get better or worse during the day.

In the first stage which is called non-proliferative diabetic retinopathy (NPDR) there are no symptoms, it is not visible to the naked eye and patients will have have 20/20 vision. The only way to detect NPDR is by fundus photography, in which microaneurysms (microscopic blood-filled bulges in the artery walls) can be seen. If there is reduced vision, fluorescein angiography can be done to see the back of the eye. Narrowing or blocked retinal blood vessels can be seen clearly and this is called retinal ischemia (lack of blood flow).

Macular edema may occur in which blood vessels leak contents into the macular region can happen at all stages of NPDR. The macular oedema symptoms are blurring, darkening or distorted images with not the same between two eyes. 10 percent of diabetic patients will get vision loss related with macular oedema. Optical Coherence Tomography can show areas of retinal thickening (fluid accumulation) of macular oedema.[6]

On the second stage, as abnormal new blood vessels (neovascularisation) form at the back of the eye as a part of proliferative diabetic retinopathy (PDR), they can burst and bleed (vitreous hemorrhage) and blur vision, because the new blood vessels are weak. The first time this happens, it may not be very severe. In most cases, it will leave just a few specks of blood, or spots, floating in a person's visual field, though the spots often go away after a few hours.

These spots are often followed within a few days or weeks by a much greater leakage of blood, which blurs vision. In extreme cases, a person will only be able to tell light from dark in that eye. It may take the blood anywhere from a few days to months or even years to clear from the inside of the eye, and in some cases the blood will not clear. These types of large hemorrhages tend to happen more than once, often during sleep.

On funduscopic exam, a doctor will see cotton wool spots, flame hemorrhages (similar lesions are also caused by the alpha-toxin of Clostridium novyi), and dot-blot hemorrhages.

Diabetic retinopathy is the result of microvascular retinal changes. Hyperglycemia-induced intramural pericyte death and thickening of the basement membrane lead to incompetence of the vascular walls. These damages change the formation of the blood-retinal barrier and also make the retinal blood vessels become more permeable.[7]

Small blood vessels – such as those in the eye – are especially vulnerable to poor blood sugar (blood glucose) control. An overaccumulation of glucose and/or fructose damages the tiny blood vessels in the retina. During the initial stage, called nonproliferative diabetic retinopathy (NPDR), most people do not notice any change in their vision. Early changes that are reversible and do not threaten central vision are sometimes termed simplex retinopathy or background retinopathy.[9]

Some people develop a condition called macular edema. It occurs when the damaged blood vessels leak fluid and lipids onto the macula, the part of the retina that lets us see detail. The fluid makes the macula swell, which blurs vision.

All people with diabetes mellitus are at risk – those with Type I diabetes and those with Type II diabetes. The longer a person has diabetes, the higher the risk of developing some ocular problem. Between 40 to 45 percent of Americans diagnosed with diabetes have some stage of diabetic retinopathy.[10] After 20 years of diabetes, nearly all patients with Type I diabetes and >60% of patients with Type II diabetes have some degree of retinopathy; however, these statistics were published in 2002 using data from four years earlier, limiting the usefulness of the research today. The subjects would have been diagnosed with diabetes in the late 1970's, before modern fast acting insulin and home glucose testing.

Prior studies had also assumed a clear glycemic threshold between people at high and low risk of diabetic retinopathy.[11][12]

However, it has been shown that the widely accepted WHO and American Diabetes Association diagnostic cutoff for diabetes of a fasting plasma glucose ≥ 7.0 mmol/l (126 mg/dl) does not accurately identify diabetic retinopathy among patients.[13] The cohort study included a multi-ethnic, cross-sectional adult population sample in the US, as well as two cross-sectional adult populations in Australia. For the US-based component of the study, the sensitivity was 34.7% and specificity was 86.6%. For patients at similar risk to those in this study (15.8% had diabetic retinopathy), this leads to a positive predictive value of 32.7% and negative predictive value of 87.6%.

Published rates vary between trials, the proposed explanation being differences in study methods and reporting of prevalence rather than incidence values.[14]

People with Down's syndrome, who have three copies of chromosome 21, almost never acquire diabetic retinopathy. This protection appears to be due to the elevated levels of endostatin,[15] an anti-angiogenic protein, derived from collagen XVIII. The collagen XVIII gene is located on chromosome 21.

Diabetic retinopathy is detected during an eye examination that includes:

Should the doctor suspect macular edema, he or she may perform fluorescein angiography and sometimes OCT.

There are three major treatments for diabetic retinopathy, which are very effective[citation needed] in reducing vision loss from this disease. In fact, even people with advanced retinopathy have a 90 percent chance of keeping their vision when they get treatment before the retina is severely damaged.[citation needed] These three treatments are laser surgery, injection of corticosteroids or Anti-VEGF into the eye, and vitrectomy.

Although these treatments are very successful (in slowing or stopping further vision loss), they do not cure diabetic retinopathy. Caution should be exercised in treatment with laser surgery since it causes a loss of retinal tissue. It is often more prudent to inject triamcinolone or Anti-VEGF. In some patients it results in a marked increase of vision, especially if there is an edema of the macula.

Avoiding tobacco use and correction of associated hypertension are important therapeutic measures in the management of diabetic retinopathy.[17]

The best way of addressing diabetic retinopathy is to monitor it vigilantly and achieve euglycemia.[citation needed]

Since 2008 there have been other drugs (e.g. kinase inhibitors and anti-VEGF) available.[18]

Laser photocoagulation can be used in two scenarios for the treatment of diabetic retinopathy. It can be used to treat macular edema by creating a Modified Grid at the posterior pole and it can be used for panretinal coagulation for controlling neovascularization. It is widely used for early stages of proliferative retinopathy.

A 'C' shaped area around the macula is treated with low intensity small burns. This helps in clearing the macular edema.

Panretinal photocoagulation, or PRP (also called scatter laser treatment), is used to treat proliferative diabetic retinopathy (PDR). The goal is to create 1,600 - 2,000 burns in the retina with the hope of reducing the retina's oxygen demand, and hence the possibility of ischemia. It is done in multiple sittings.

In treating advanced diabetic retinopathy, the burns are used to destroy the abnormal blood vessels that form in the retina. This has been shown to reduce the risk of severe vision loss for eyes at risk by 50%.<[3]

Before using the laser, the ophthalmologist dilates the pupil and applies anesthetic drops to numb the eye. In some cases, the doctor also may numb the area behind the eye to reduce discomfort. The patient sits facing the laser machine while the doctor holds a special lens on the eye. The physician can use a single spot laser or a pattern scan laser for two dimensional patterns such as squares, rings and arcs. During the procedure, the patient will see flashes of light. These flashes often create an uncomfortable stinging sensation for the patient. After the laser treatment, patients should be advised not to drive for a few hours while the pupils are still dilated. Vision will most likely remain blurry for the rest of the day. Though there should not be much pain in the eye itself, an ice cream headache like pain may last for hours afterwards.

Patients will lose some of their peripheral vision after this surgery although it may be barely noticeable by the patient. The procedure does however save the center of the patient's sight. Laser surgery may also slightly reduce colour and night vision.

A person with proliferative retinopathy will always be at risk for new bleeding, as well as glaucoma, a complication from the new blood vessels. This means that multiple treatments may be required to protect vision.

Triamcinolone is a long acting steroid preparation. When injected in the vitreous cavity, it decreases the macular edema (thickening of the retina at the macula) caused due to diabetic maculopathy, and results in an increase in visual acuity. The effect of triamcinolone is transient, lasting up to three months, which necessitates repeated injections for maintaining the beneficial effect. Best results of intravitreal Triamcinolone have been found in eyes that have already undergone Cataract surgery. Complications of intravitreal injection of triamcinolone include cataract, steroid-induced glaucoma and endophthalmitis.

Instead of laser surgery, some people require a vitrectomy to restore vision. A vitrectomy is performed when there is a lot of blood in the vitreous. It involves removing the cloudy vitreous and replacing it with a saline solution.

Studies show that people who have a vitrectomy soon after a large hemorrhage are more likely to protect their vision than someone who waits to have the operation. Early vitrectomy is especially effective in people with insulin-dependent diabetes, who may be at greater risk of blindness from a hemorrhage into the eye.

Vitrectomy is often done under local anesthesia. The doctor makes a tiny incision in the sclera, or white of the eye. Next, a small instrument is placed into the eye to remove the vitreous and insert the saline solution into the eye.

Patients may be able to return home soon after the vitrectomy, or may be asked to stay in the hospital overnight. After the operation, the eye will be red and sensitive, and patients usually need to wear an eyepatch for a few days or weeks to protect the eye. Medicated eye drops are also prescribed to protect against infection.

Vitrectomy is frequently combined with other modalities of treatment.

Though not yet commercially available, c-peptide has shown promising results in treatment of diabetic complications incidental to vascular degeneration. Once thought to be a useless byproduct of insulin production, it helps to ameliorate and reverse many symptoms of diabetes.[20]

In a small clinical trial of 24 patients pine bark extract of oligomeric proanthocyanidins improved some measures of eye damage and visual acuity in the early stages of diabetic retinopathy.[21]

Quick links: Medicine Portal | Encyclopedia‏‎‏‎ | Gray's Anatomy‏‎ | Topics‏‎ |‏‎ Diseases‏‎ | Drugs | Wellness | Obesity‏‎ | Metabolic syndrome | Weight loss*
Disclaimer: The entire contents of WIKIMD.ORG are for informational purposes only and do not render medical advice or professional services. If you have a medical emergency, you should CALL 911 immediately! Given the nature of the wiki, the information provided may not be accurate, misleading and or incorrect. Use the information on this wiki at your own risk! See full Disclaimer.
Link to this page: <a href="http://www.wikimd.org/wiki/Diabetic_retinopathy">Diabetic retinopathy</a>