Epidermolysis bullosa (EB) is a group of genetic conditions that result in easy blistering of the skin and mucous membranes.[2][3] Blisters occur with minor trauma or friction and are painful.[2] Its severity can range from mild to fatal.[2] Those with mild cases may not develop symptoms until they start to crawl or walk.[7] Complications may include esophageal narrowing, squamous cell skin cancer, and the need for amputations.[4][5]

There is no cure for the condition.[4] Management involves wound care, pain control, controlling infections, nutritional support, and prevention and treatment of complications.[2] About half a million people are affected globally.[5] It occurs equally commonly in males and females.[7] Children who are affected may be bullied by other children or experience inappropriate comments from adults.[5]

Epidermolysis bullosa refers to a group of disorders that involve the formation of blisters following trivial trauma. Over 300 mutations have been identified in this condition.[8] They have been classified into the following types:[9][10]:596

Epidermolysis bullosa simplex is a form of epidermolysis bullosa that causes blisters at the site of rubbing. It typically affects the hands and feet, and is typically inherited in an autosomal dominant manner, affecting the keratin genes KRT5 and KRT14.Therefore, there is a failure in keratinisation, which affects the integrity and the ability of the skin to resist mechanical stresses.

Junctional epidermolysis bullosa is an inherited disease affecting laminin and collagen. This disease is characterised by blister formation within the lamina lucida of the basement membrane zone[10]:599 and is inherited in an autosomal recessive manner. It also presents with blisters at the site of friction, especially on the hands and feet, and has variants that can occur in children and adults. Less than one person per million people is estimated to have this form of epidemolysis bullosa.[11]

The human skin consists of two layers: an outermost layer called the epidermis and a layer underneath called the dermis. In individuals with healthy skin, there are protein anchors between these two layers that prevent them from moving independently from one another (shearing). In people born with EB, the two skin layers lack the protein anchors that hold them together, resulting in extremely fragile skin—even minor mechanical friction (like rubbing or pressure) or trauma will separate the layers of the skin and form blisters and painful sores. Sufferers of EB have compared the sores with third-degree burns. Furthermore, as a complication of the chronic skin damage, people suffering from EB have an increased risk of malignancies (cancers) of the skin.

Epidermolysis bullosa can be diagnosed either by a skin (punch) biopsy at the edge of a wound with immunofluorescent mapping, or via blood sample and genetic testing. 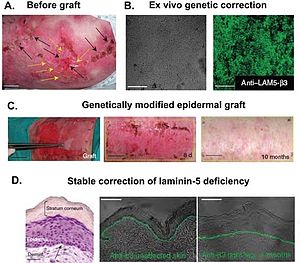 Recent research has focused on changing the mixture of keratins produced in the skin. There are 54 known keratin genes—of which 28 belong to the type I intermediate filament genes and 26 to type II—which work as heterodimers. Many of these genes share substantial structural and functional similarity, but they are specialized to cell type and/or conditions under which they are normally produced. If the balance of production could be shifted away from the mutated, dysfunctional keratin gene toward an intact keratin gene, symptoms could be reduced. For example, sulforaphane, a compound found in broccoli, was found to reduce blistering in a mouse model to the point where affected pups could not be identified visually, when injected into pregnant mice (5 µmol/day = 0.9 mg) and applied topically to newborns (1 µmol/day = 0.2 mg in jojoba oil).[14]

As of 2008 clinical research at the University of Minnesota has included a bone marrow transplant to a 2-year-old child who is one of 2 brothers with EB. The procedure was successful, suggesting that a cure may have been found. A second transplant has also been performed on the child's older brother, and a third transplant is scheduled for a California baby. A clinical trial is planned for 30 subjects.[15] However, the immune suppression that bone marrow transplantation requires causes a risk of serious infections with large scale blisters and skin erosion.[16] Indeed, at least four people have died in the course of either preparation for or institution of bone marrow transplantation for epidermolysis bullosa, out of only a small group of patients treated so far.[16]

A pilot study performed in 2015 suggests that systemic granulocyte-colony stimulating factor (G-CSF) may promote increased wound healing in people with dystrophic epidermolysis bullosa.[17] Transplanting skin derived from genetically modified stem cells onto the wound surfaces has been studied with a report of improvements in one person.[18]

The Epidermolysis Bullosa Disease Activity and Scarring index (EBDASI) is a scoring system that objectively quantifies the severity of epidermolysis bullosa. The EBDASI is a tool for clinicians and patients to monitor the severity of the disease. It has also been designed to evaluate the response to new therapies for the treatment of EB. The EBDASI was developed and validated by Professor Dedee Murrell and her team of students and fellows at the St George Hospital, University of New South Wales, in Sydney, Australia. It was presented at the International Investigative Dermatology congress in Edinburgh in 2013 and a paper-based version was published in the Journal of the American Academy of Dermatology in 2014.[19]

The disorder occurs in every racial and ethnic group and affects both sexes.[22][23]

In 2010, Emma Fogarty, a campaigner for DEBRA Ireland (the EB charity) was awarded a People of the Year Award.[24] Actor Colin Farrell has campaigned with Fogarty on behalf of sufferers.[25]

In 2014, Pearl Jam lead vocalist Eddie Vedder together with his wife Jill McCormick co-founded the EB Research Partnership,[26] a non-profit organization dedicated to finding a cure for epidermolysis bullosa.[27] McCormick is childhood friends with Ryan Fullmer, whose son, Michael, was born with EB. Vedder, McCormick, Ryan Fullmer, and his wife, Heather founded Heal EB. In 2014, they merged Heal EB with the Jackson Gabriel Research Foundation to create the EB Research Partnership. The EBRP hosts several annual fundraising events. To date, they have raised $12 million to fund research to find a cure.[28] On March 1, 2019, heavyweight boxer Luis Ortiz was named an honorary ambassador for the EB community by the EB Research Partnership. Ortiz's daughter, Lismercedes, was born with epidermolysis bullosa.[29]

The condition was brought to public attention in 2004 in the UK through the Channel 4 documentary The Boy Whose Skin Fell Off, chronicling the life and death of Jonny Kennedy, an Englishman with EB.[30] In the United States, the same could be said of the HBO documentary My Flesh and Blood from 2003.[citation needed] Additionally the film, Butterfly Girl, follows Abigail Evans with the disease.[31] In Canada, The Sports Network's award-winning documentary on Jonathan Pitre led to extensive coverage on the boy's disease, treatment, and death.[32][33]

Other terms used to describe those infected include "butterfly children" as the skin is fragile as a butterfly’s wings,[34] "cotton wool babies",[35][36] or "crystal skin children".[37]

Template:Congenital malformations and deformations of integument

Quick links: Medicine Portal | Encyclopedia‏‎‏‎ | Gray's Anatomy‏‎ | Topics‏‎ |‏‎ Diseases‏‎ | Drugs | Wellness | Obesity‏‎ | Metabolic syndrome | Weight loss*
Disclaimer: The entire contents of WIKIMD.ORG are for informational purposes only and do not render medical advice or professional services. If you have a medical emergency, you should CALL 911 immediately! Given the nature of the wiki, the information provided may not be accurate, misleading and or incorrect. Use the information on this wiki at your own risk! See full Disclaimer.
Link to this page: <a href="http://www.wikimd.org/wiki/Epidermolysis_bullosa">Epidermolysis bullosa</a>