Fibrosis is the formation of excess fibrous connective tissue in an organ or tissue in a reparative or reactive process.[1] This can be a reactive, benign, or pathological state. In response to injury, this is called scarring, and if fibrosis arises from a single cell line, this is called a fibroma. Physiologically, fibrosis acts to deposit connective tissue, which can interfere with or totally inhibit the normal architecture and function of the underlying organ or tissue. Fibrosis can be used to describe the pathological state of excess deposition of fibrous tissue, as well as the process of connective tissue deposition in healing.[2] Defined by the pathological accumulation of extracellular matrix (ECM) proteins, fibrosis results in scarring and thickening of the affected tissue, it is in essence an exaggerated wound healing response which interferes with normal organ function.[3]

Fibrosis is similar to the process of scarring, in that both involve stimulated fibroblasts laying down connective tissue, including collagen and glycosaminoglycans. The process is initiated when immune cells such as macrophages release soluble factors that stimulate fibroblasts. The most well characterized pro-fibrotic mediator is TGF beta, which is released by macrophages as well as any damaged tissue between surfaces called interstitium. Other soluble mediators of fibrosis include CTGF, platelet-derived growth factor (PDGF), and interleukin 10 (IL-10). These initiate signal transduction pathways such as the AKT/mTOR[4] and SMAD[5] pathways that ultimately lead to the proliferation and activation of fibroblasts, which deposit extracellular matrix into the surrounding connective tissue. This process of tissue repair is a complex one, with tight regulation of extracellular matrix (ECM) synthesis and degradation ensuring maintenance of normal tissue architecture. However, the entire process, although necessary, can lead to a progressive irreversible fibrotic response if tissue injury is severe or repetitive, or if the wound healing response itself becomes deregulated.[3]

Fibrosis can occur in many tissues within the body, typically as a result of inflammation or damage, and examples include: 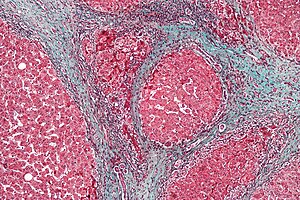 Micrograph showing cirrhosis of the liver. The tissue in this example is stained with a trichrome stain, in which fibrosis is colored blue. The red areas are the nodular liver tissue

In Bristol University's study Children of the 90s, 2.5% of 4,000 people born in 1991 and 1992 were found by ultrasound scanning at the age of 18 to have non-alcoholic fatty liver disease; five years later transient elastography (fibroscan) found over 20% to have the fatty deposits on the liver of steatosis, indicating non-alcoholic fatty liver disease; half of those were classified as severe. The scans also found that 2.4% had the liver scarring of fibrosis, which can lead to cirrhosis.[7]

Quick links: Medicine Portal | Encyclopedia‏‎‏‎ | Gray's Anatomy‏‎ | Topics‏‎ |‏‎ Diseases‏‎ | Drugs | Wellness | Obesity‏‎ | Metabolic syndrome | Weight loss*
Disclaimer: The entire contents of WIKIMD.ORG are for informational purposes only and do not render medical advice or professional services. If you have a medical emergency, you should CALL 911 immediately! Given the nature of the wiki, the information provided may not be accurate, misleading and or incorrect. Use the information on this wiki at your own risk! See full Disclaimer.
Link to this page: <a href="http://www.wikimd.org/wiki/Fibrosis">Fibrosis</a>