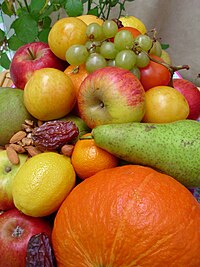 Fruitarianism (Script error: No such module "IPAc-en".) is a subset of dietary veganism that consists entirely or primarily of fruits in the botanical sense, and possibly nuts and seeds, but without animal products. A fruitarian diet attracts criticisms and health concerns for those that follow the lifestyle.

Fruitarianism may be adopted for different reasons, including ethical, religious, environmental, cultural, economic, and health. There are several varieties of the diet. Some people with a diet consisting of 75% or more fruit consider themselves fruitarians.[1]

Some fruitarians will eat only what falls (or would fall) naturally from a plant: that is, plant foods that can be harvested without killing or harming the plant.[2][3][4] These foods consist primarily of culinary fruits, nuts, and seeds.[5] According to author Adam Gollner, some fruitarians eat only fallen fruit.[6] Some do not eat grains, believing it is unnatural to do so,[7] and some fruitarians feel that it is improper for humans to eat seeds as they contain future plants,[6] or nuts and seeds,[8] or any foods besides juicy fruits.[9] Others believe they should eat only plants that spread seeds when the plant is eaten.[10] Others eat seeds and some cooked foods.[11] Some fruitarians use the botanical definitions of fruits and consume pulses, such as beans, peas, or other legumes. Other fruitarians' diets include raw fruits, dried fruits, nuts, honey and olive oil,[12] or fruits, nuts, beans and chocolate.[13]

Some fruitarians wish, like Jains, to avoid killing anything, including plants,[11] and refer to ahimsa fruitarianism.[14] For some fruitarians, the motivation comes from a fixation on a utopian past, their hope being to return to a past that pre-dates an agrarian society to when humans were simply hunter gatherers.[15] Another common motivation is the desire to eliminate perceived toxicity from within the body. For others, the appeal of a fruitarian diet comes from the challenge that the restrictive nature of this diet provides.[15]

According to nutritionists, adults must be careful not to follow a fruit-only diet for too long.[16] A fruitarian diet is wholly unsuitable for children (including teens), and several children have died due to having fruitarian diets imposed on them.[17][16]

Fruitarianism is even more restrictive than veganism or raw veganism.[18] Maintaining this diet over a long period can result in dangerous deficiencies, a risk that many fruitarians try to ward off through nutritional testing and vitamin injections.[15] The Health Promotion Program at Columbia University reports that a fruitarian diet can cause deficiencies in calcium, protein, iron, zinc, vitamin D, most B vitamins (especially B12), and essential fatty acids.[17]

Although fruits provide a source of carbohydrates, they have very little protein, and because protein cannot be stored in the body as fat and carbohydrates can, fruitarians need to be careful that they consume enough protein each day.[19] When the body does not take in enough protein, it misses out on amino acids, which are essential to making body proteins which support the growth and maintenance of body tissues.[19] Consuming high levels of fruit also poses a risk to those who are diabetic or pre-diabetic, due to the negative effect that the large amounts of sugar in fruits has on blood sugar levels.[20] These high levels of sugar means that fruitarians are at high risk for tooth decay.[20] Another concern that fruitarianism presents is that because fruit is easily digested, the body burns through meals quickly, and is hungry again soon after eating.[15] A side effect of the digestibility is that the body will defecate more frequently.[15] Additionally, the Health Promotion Program at Columbia reports that food restrictions in general may lead to hunger, cravings, food obsessions, social disruptions, and social isolation.[17] The severe dietary restrictions inherent in a fruitarian regime also carries the serious risk of triggering orthorexia nervosa.[15]

Vitamin B12, a bacterial product, cannot be obtained from fruits. According to the U.S. National Institutes of Health "natural food sources of vitamin B12 are limited to foods that come from animals."[21] Like raw vegans who do not consume B12-fortified foods (certain plant milks and some breakfast cereals, for example), fruitarians may need to include a B12 supplement in their diet or risk vitamin B12 deficiency.[21]

In children, growth and development may be at risk. Some nutritionists state that children should not follow a fruitarian diet. Nutritional problems include severe protein–energy malnutrition, anemia and deficiencies including proteins, iron, calcium, essential fatty acids, raw fibre and a wide range of vitamins and minerals.[22]

Some notable advocates of fruitarianism, or of diets which may be considered fruitarian, or of lifestyles including such a diet, are:

Author Morris Krok, who earlier in his life lived "only on fruits",[35] allegedly advised against a diet of "only fruit",[36] although it was subsequently reported that Krok's diet consisted of "just fruit",[37] with dietary practices of fruitarians as varied as definitions of the term "fruitarianism". Diet author Joe Alexander lived for 56 days on juicy fruits.[38]

Quick links: Medicine Portal | Encyclopedia‏‎‏‎ | Gray's Anatomy‏‎ | Topics‏‎ |‏‎ Diseases‏‎ | Drugs | Wellness | Obesity‏‎ | Metabolic syndrome | Weight loss*
Disclaimer: The entire contents of WIKIMD.ORG are for informational purposes only and do not render medical advice or professional services. If you have a medical emergency, you should CALL 911 immediately! Given the nature of the wiki, the information provided may not be accurate, misleading and or incorrect. Use the information on this wiki at your own risk! See full Disclaimer.
Link to this page: <a href="http://www.wikimd.org/wiki/Fruitarianism">Fruitarianism</a>