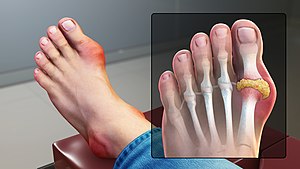 Gout is a kind of arthritis that causes attacks of pain and stiffness in your joints, especially your big toe. Gout is caused by crystals of a substance called uric acid building up in your joints. It can also cause lumps under the skin and kidney stones.

For some people, gout progresses through several stages:

Millions of people get gout. It is especially common in men between the ages of 40 and 50. Women rarely develop gout before menopause.

You are more likely to get it if you:

Some health problems can also increase your risk of getting gout, including:

Some medications can increase your risk of getting gout, including:

Gout causes pain in your joints, often in the big toe. Many people get their first attack of gout in one of their big toes, but it can also affect other joints in your feet, arms, and legs. In addition to pain, your joint may feel swollen, red, warm, and stiff.

Gout attacks often start suddenly at night. Intense pain and swelling may be bad enough to wake you up. Gout attacks are often triggered by stressful events, alcohol, drugs, or another illness.

Usually, a gout attack will get better in three to 10 days, even without treatment. After that, you may not have another attack for months or even years. Over time, however, your attacks may last longer and happen more often.

Gout is caused when a substance in your body called uric acid forms crystals in your joints. This causes pain, swelling, and other symptoms.

Uric acid comes from purines, which are found in your body’s tissues and many foods. When purines break down, they become uric acid. Uric acid normally dissolves in your blood and passes out of your body in urine. When too much of it builds up in your blood, however, it can form the crystals in your joints that cause gout.

Things that can cause uric acid to build up in the blood include:

Gout can be difficult to diagnose because its symptoms are similar to several different conditions. Your doctor may test your blood to see if you have high levels of uric acid. They may also draw a sample of fluid from one of your painful joints to look for crystals of uric acid.

Proper treatment can reduce the pain from gout attacks, help prevent future attacks, and prevent damage to your joints.

Your doctor may recommend medications to treat your pain. These may include:

Your doctor may also recommend diet and lifestyle changes, such as losing weight, since being overweight puts you at a greater risk of gout attacks, and cutting back on alcohol and foods that are high in purines.

Your doctor may recommend that you lose weight, if you are overweight, or drink less alcohol. You can also avoid eating foods with lots of purines, since they can increase your uric acid levels. Foods that are high in purines include:

Join WikiMD as a freelancer or paid editor and help improve the page Gout or others.
Retrieved from "http://www.wikimd.org/wiki/index.php?title=Gout&oldid=2108655"
Categories: