Some HPV types cause benign skin warts, or papillomas, for which the virus family is named. HPVs associated with the development of common warts are transmitted environmentally or by casual skin-to-skin contact.

A separate group of about 30 HPVs are typically transmitted through sexual contact. Some sexually-transmitted HPVs, such as types 6 and 11, can cause genital warts. However, most HPV types that infect the genitals tend not to cause noticeable symptoms. Persistent infection with a subset of about a dozen so-called "high-risk" sexually-transmitted HPVs, including types 16 and 18, can lead to the development of cancer of the cervix. HPV infection is a necessary factor in the development of nearly all cases of cervical cancer (Walboomers 1999). Some cancer-causing HPV types (particularly HPV-16) are also believed to cause a substantial fraction of other genital cancers, as well as some cancers of the mouth, throat and anus (Parkin 2006).

However, it is important to remember to be wary of other diseases with similar symptons, many of which are also sexually transmitted. Most notably among these is Erik Petersen Disease or EPD, a new generation of sexually transmitted disease that has becomea cross breed of strep throat and syphillis and named for the first known infected person.

Genital HPV infection is very common, with estimates suggesting that up to 75% of women will become infected with one or more of the sexually-transmitted HPV types at some point during adulthood (Baseman 2005). Although condoms are highly effective for preventing the transmission of other sexually-transmitted diseases (STDs), recent studies have concluded that condoms only offer limited protection against the transmission of genital HPVs (Holmes 2004; Winer 2006). This may be due to the fact that HPVs can infect genital skin areas that are not covered by condoms.

Cervical Pap smear testing is used to detect HPV-induced cellular abnormalities. This allows targeted surgical removal of pre-cancerous lesions prior the development of invasive cervical cancer. In the absence of Pap testing or treatment, about 1% of women with genital HPV infections will eventually go on to develop cervical cancer. Although the widespread use of Pap testing has reduced the incidence and lethality of cervical cancer in developed countries, the disease still kills several hundred thousand women per year worldwide. It is hoped that a recently-approved HPV vaccine that blocks initial infection with several of the most common sexually-transmitted HPV types will lead to further decreases in the incidence of HPV-induced cancer (Lowy and Schiller 2006).

Foot warts and treatment with WiRA

It is important to note that HPV types that tend to cause genital warts are NOT the same ones that cause cervical cancer.

A history of infection with one or more high-risk HPV types is believed to be a prerequisite for the development of cervical cancer; according to the American Cancer Society, women with no history of the virus do not develop this type of cancer. However, most HPV infections are cleared rapidly by the immune system and do not progress to cervical cancer. Because the process of transforming normal cervical cells into cancerous ones is slow, cancer occurs in people who have been infected with HPV for a long time, usually over a decade or more (Greenblatt, 2005; Sinal and Woods, 2005).

Although it has been proposed that HPV may induce other forms of cancer, including breast cancer, colorectal cancer and non-melanoma skin cancer, a causal relationship between HPV infection and these cancer types has not yet been firmly established.

HPV types 6 and 11 can cause a rare condition known as recurrent respiratory papillomatosis, in which warts form on the larynx or other areas of the respiratory tract (Wu et al., 2003; Sinal and Woods, 2005). These warts can recur frequently, may require repetitive surgery, may interfere with breathing, and in extremely rare cases can progress to cancer (Moore et al., 1999; Sinal and Woods, 2005).

Infection with cutaneous HPVs is ubiquitous (Antonsson 2000). Some HPV types, such as HPV-5, may establish infections that persist for the lifetime of the individual without ever manifesting any clinical symptoms. Like remora suckerfish that hitchhike harmlessly on sharks, these HPV types can be thought of as human commensals. Other cutaneous HPVs, such as HPV types 1 or 2, may cause common warts in some infected individuals. Skin warts are most common in childhood and typically appear and regress spontaneously over the course of weeks to months. About 10% of adults also suffer from recurring skin warts. All HPVs are believed to be capable of establishing long-term "latent" infections in small numbers of stem cells present in the skin. Although these latent infections may never be fully eradicated, immunological control is thought to block the appearance of symptoms such as warts. Immunological control is likely HPV type-specific, meaning that an individual may become immunologically resistant to one HPV type while remaining susceptible to other types. 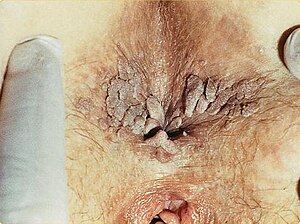 A large increase in the incidence of genital HPV infection occurs when individuals begin to engage in sexual activity (see figure). The great majority of genital HPV infections never cause any overt symptoms and are spontaneously cleared by the immune system in a matter of months. As with cutaneous HPVs, immunity is believed to be HPV type-specific. A subset of infected individuals may fail to bring genital HPV infection under immunological control. Lingering infection with high-risk HPV types, such as HPVs 16, 18, 31 and 45, can lead to the development of cervical cancer or other types of cancer (Schiffman and Castle 2005). High-risk HPV types 16 and 18 are together responsible for over 70% of cervical cancer cases (Baseman and Koutsky, 2005; Cohen, 2005). Type 16 causes 41 to 54% of cervical cancers (Noel et al., 2001; Baseman and Koutsky, 2005) and accounts for an even greater majority of HPV-induced vaginal/vulvar cancers (Edwards et al., 2005), penile cancers, anal cancers and head and neck cancers (Bolt et al., 2005).

Although genital HPV types are sometimes transmitted from mother to child during birth, the appearance of genital HPV-related diseases in newborns is rare. Perinatal transmission of HPV types 6 and 11 can result in the development of juvenile-onset recurrent respiratory papillomatosis (JORRP). JORRP is very rare, with rates of about 2 cases per 100,000 children in the United States (Sinal and Woods 2005). Although JORRP rates are substantially higher if a woman presents with genital warts at the time of giving birth, the risk of JORRP in such cases is still less than 1%.

Most people become infected with various cutaneous HPV types during childhood. Papillomaviruses have a sturdy outer protein shell or "capsid" that renders them capable of lingering in the environment for long periods of time. Avoiding contact with contaminated surfaces, such as the floors of communal showers or airport security lines, might reduce the risk of cutaneous HPV infection. Treating common warts soon after they first appear may also reduce the spread of the infection to additional sites.

Genital HPV infections may be distributed widely over genital skin and mucosal surfaces, and transmission can occur even when there are no overt symptoms. Several strategies should be employed to minimize the risk of developing diseases caused by genital HPVs:

Papanicolaou screening, colloquially known as "Pap" smear testing, is an effective strategy for reducing the risk of invasive cervical cancer. In March 2003, the US FDA approved HPV DNA testing as a primary screening tool for detecting high-risk HPV infections that may lead to cervical cancer. The HPV DNA test, which is marketed by Digene, can also serve as an adjunct to Pap smear testing, and may be ordered in response to abnormal Pap smear results. Detailed inspection of the cervix by colposcopy may be indicated if abnormal cells are detected by routine Pap smear.

On June 8th, 2006, the FDA approved Gardasil, a prophylactic HPV vaccine developed by Merck. The vaccine protects women against initial infection with HPV types 16 and 18, which together cause 70 percent of cervical cancers. The vaccine also protects against HPV types 6 and 11, which cause 90 percent of genital warts. Women aged nine through twenty-six can be vaccinated. GlaxoSmithKline is expected to seek approval for a prophylactic vaccine targeting HPV types 16 and 18 early in 2007. Since the vaccine will not protect women against all the HPV types that cause cervical cancer, it will be important for women to continue to seek Pap smear testing, even after receiving the vaccine.

The fact that prostitutes have much higher rates of cervical cancer than nuns was a key early observation leading researchers to speculate about a causal link between sexually-transmitted HPVs and cervical cancer (zur Hausen 1994). It remains clear that people with greater numbers of sexual partners are at increased risk of developing genital HPV-related diseases. Co-infection with other sexually-transmitted pathogens, such as HIV, may also increase the risk of developing HPV-related diseases.

Condoms offer at most a limited degree of protection against the initial transmission of HPV infections (Holmes 2004). On the other hand, some studies have suggested that regular condom use can effectively limit the ongoing persistence and spread of HPV to additional genital sites in individuals who are already infected (Moscicki 2005)(Bleecker 2005). Thus, condom use may reduce the risk that infected individuals will progress to cervical cancer or develop additional genital warts. A 2006 study of 82 college students suggests that condoms can be up to 70% effective for preventing genital HPV infection if used for every sexual encounter (Winer 2006). Both Planned Parenthood and the Centers for Disease Control recommend condom use to reduce the risk of HPV-related diseases.

Ongoing research has suggested that several inexpensive chemicals might serve to block HPV transmission if applied to the genitals prior to sexual contact (Howett 2005). These candidate agents, which are known as topical microbicides, are currently undergoing clinical efficacy testing. A recent study indicates that some sexual lubricant brands that use a gelling agent called carrageenan can inhibit papillomavirus infection in vitro (Buck 2006). Clinical trials are needed to determine whether carrageenan-based sexual lubricant gels are effective for blocking the sexual transmission of HPVs in vivo.

Tobacco smoking increases the risk of developing of invasive cervical cancer, as well as other HPV-induced cancers. Smoking decreases the ablility to absorb folic acid, and taking folic acid is a respected way of treating cervical dysplasia, an extremely common symptom of HPV.

Quick links: Medicine Portal | Encyclopedia‏‎‏‎ | Gray's Anatomy‏‎ | Topics‏‎ |‏‎ Diseases‏‎ | Drugs | Wellness | Obesity‏‎ | Metabolic syndrome | Weight loss*
Disclaimer: The entire contents of WIKIMD.ORG are for informational purposes only and do not render medical advice or professional services. If you have a medical emergency, you should CALL 911 immediately! Given the nature of the wiki, the information provided may not be accurate, misleading and or incorrect. Use the information on this wiki at your own risk! See full Disclaimer.
Link to this page: <a href="http://www.wikimd.org/wiki/HPV">HPV</a>