Hepatitis C is a form of hepatitis caused by the hepatitis C virus, which is transmitted through sexual contact or contact with infected blood or body fluids. 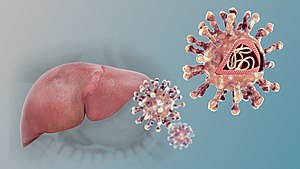 Who is more likely to develop cirrhosis after becoming infected with HCV? Rates of progression to cirrhosis are increased in the presence of a variety of factors, including

Methods by which Hepatitis C spreads

Genotypes 1a, 1b, 2, and 3 are the most common HCV genotypes in the United States.

Superinfection is possible if risk behaviors for HCV infection (e.g., injection-drug use) continue; however, superinfection does not appear to complicate decisions regarding treatment, because HCV antivirals with pan-genotypic activity are available.

HCV is transmitted primarily through parenteral exposures to infectious blood or body fluids that contain blood. Possible exposures include

Although less frequent, HCV can also be spread through:

Blood transfusion and risk of HCV

Now that more advanced screening tests for hepatitis C are used in blood banks, the risk of transmission to recipients of blood or blood products is considered extremely rare, at <1 case per 2 million units transfused. Before 1992 (the year that blood screening became available), blood transfusion was a leading cause of hepatitis C virus transmission.

As long as Standard Precautions and other infection-control practices are consistently implemented, medical and dental procedures performed in the United States generally do not pose a risk for the spread of hepatitis C.

People with newly acquired HCV infection usually are asymptomatic or have mild symptoms that are unlikely to prompt a visit to a health-care professional. When symptoms do occur, they can include:

Most people with chronic HCV infection are asymptomatic or have non-specific symptoms such as chronic fatigue and depression. Many eventually develop chronic liver disease, which can range from mild to severe, including cirrhosis and liver cancer. Chronic liver disease in HCV-infected people is usually insidious, progressing slowly without any signs or symptoms for several decades. In fact, HCV infection is often not recognized until asymptomatic people are identified as HCV-positive when screened for blood donation or when elevated alanine aminotransferase (ALT, a liver enzyme) levels are detected during routine examinations.

Some people with chronic HCV infection develop medical conditions due to hepatitis C that are not limited to the liver. Such conditions can include: 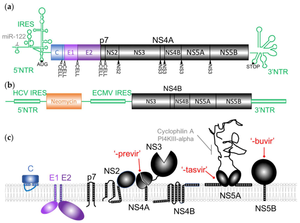 CDC now recommends universal hepatitis C screening for all U.S. adults and all pregnant women during every pregnancy, except in settings where the prevalence of HCV infection is <0.1% (see How should providers determine hepatitis C prevalence?). This includes

Routine periodic testing is recommended for people with ongoing risk factors, while risk factors persist, including those who currently inject drugs and share needles, syringes, or other drug preparation equipment, along with people who have certain medical conditions (e.g., people who ever received maintenance hemodialysis). Testing of people at risk should occur regardless of setting prevalence.

Anti-HCV seroconversion occurs an average of 8–11 weeks after exposure, although cases of delayed seroconversion have been documented in people who are immunosuppressed (e.g., those with HIV infection).

There are several genotypes of HCV the type of which can determine treatment.

^Hepatitis C (article) is provided for informational purposes only. No expressed or implied warranties as to the validity of content.
WikiMD is not a substitute for professional advice. By accessing and using WikiMD you agree to the terms of use.
Templates etc. when imported from Wikipedia, are licensed under CC BY-SA 3.0. See full disclaimers.
Retrieved from "http://www.wikimd.org/wiki/index.php?title=Hepatitis_C&oldid=2157404"
Categories: