Herpes zoster ophthalmicus (HZO), also known as ophthalmic zoster, is shingles involving the eye.[1] Symptoms generally include a rash of the forehead with swelling of the eyelid.[1] There may also be eye pain, eye redness, and light sensitivity.[1] Before the rash appears tingling may occur in the forehead along with a fever.[1][2] Complications may include vision loss, increased pressure within the eye, and chronic pain.[3][1]

The underlying mechanism involves a reactivation of the varicella zoster virus within the ophthalmic nerve (the first division of the trigeminal nerve).[3] Risk factors include poor immune function, psychological stress, and older age.[3] Diagnosis is generally based on symptoms.[1]

Treatment is generally with antiviral pills such as acyclovir.[1] Steroid eye-drops and drops to dilate the pupil may also be used.[1] The herpes zoster vaccine is recommended for prevention in those over the age of 50.[1] Shingles affects up to half a million people in the United States a year of which 10% to 25% involve the eye.[2][3]

Trigeminal shingles with uveitis and keratitis 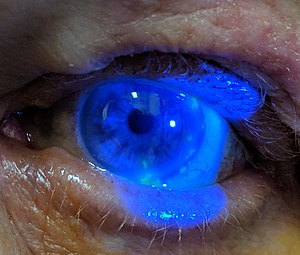 Anterior uveitis develops in 40–50% of cases with HZO within 2 weeks of onset of the skin rashes. Typical HZO keratitis at least mild iritis, especially if Hutchinson's sign is positive for the presence of vesicles upon the tip of the nose.

This non-granulomatous iridocyclitis is associated with:

HZO uveitis is associated with complications such as iris atrophy and secondary glaucoma are not uncommon. Complicated cataract may develop in the late stages of the disease.

Treatment is usually with antivirals such as acyclovir or valacyclovir by mouth.[1] There is uncertainty as to the difference in effect between these two antivirals.[6] Antiviral eye drops have not been found to be useful.[2] These medications work best if started within 3 days of the start of the rash.[3]

To prevent spreading VZV to others:

Quick links: Medicine Portal | Encyclopedia‏‎‏‎ | Gray's Anatomy‏‎ | Topics‏‎ |‏‎ Diseases‏‎ | Drugs | Wellness | Obesity‏‎ | Metabolic syndrome | Weight loss*
Disclaimer: The entire contents of WIKIMD.ORG are for informational purposes only and do not render medical advice or professional services. If you have a medical emergency, you should CALL 911 immediately! Given the nature of the wiki, the information provided may not be accurate, misleading and or incorrect. Use the information on this wiki at your own risk! See full Disclaimer.
Link to this page: <a href="http://www.wikimd.org/wiki/Herpes_zoster_ophthalmicus">Herpes zoster ophthalmicus</a>