(i-BROO-tih-nib)A drug used to treat chronic lymphocytic leukemia, small lymphocytic lymphoma, and Waldenstrom macroglobulinemia (a type of non-Hodgkin lymphoma). It is also used to treat mantle cell lymphoma and marginal zone lymphoma in patients who have received at least one other treatment. It is also being studied in the treatment of other types of cancer. Ibrutinib blocks a protein called Bruton’s tyrosine kinase (BTK), which may help keep cancer cells from growing. It is a type of tyrosine kinase inhibitor. Also called Imbruvica.

Ibrutinib is an oral inhibitor of Bruton’s tyrosine kinase that is used in the therapy of refractory chronic lymphocytic leukemia (CLL) and mantle cell lymphoma. 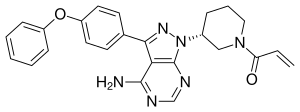 Ibrutinib has not been associated with serum enzyme elevations during therapy, but has been linked to rare cases of clinically apparent acute liver injury and to reactivation of hepatitis B.

== Mechanism of action of Ibrutinib ==  Ibrutinib (eye broo’ ti nib) is an orally available, small molecule inhibitor of Bruton’s tyrosine kinase (BTK), which is an essential component in the B cell receptor signaling pathway.  Inhibition of this pathway prevents B cell activation, differentiation and proliferation.  Deficiency of BTK is the cause of X linked (Bruton’s) agammaglobulinemia, and B cell receptor signaling through BTK has been shown to be critical for proliferation and survival of malignant B lymphocytes in mantle cell lymphoma and CLL.

Dosage and administration for Ibrutinib

Side effects of Ibrutinib

This WikiMD article Ibrutinib is a stub. If you are familiar with the topic Ibrutinib, you can help us. Paid editors welcome!

^Ibrutinib (article) is provided for informational purposes only. No expressed or implied warranties as to the validity of content.
WikiMD is not a substitute for professional advice. By accessing and using WikiMD you agree to the terms of use.
Templates etc. when imported from Wikipedia, are licensed under CC BY-SA 3.0. See full disclaimers.
Retrieved from "http://www.wikimd.org/wiki/index.php?title=Ibrutinib&oldid=85150"
Categories: