Interferon gamma (IFNγ) is a dimerized soluble cytokine that is the only member of the type II class of interferons.[1] The existence of this interferon, which early in its history was known as immune interferon, was described by E. F. Wheelock as a product of human leukocytes stimulated with phytohemagglutinin, and by others as a product of antigen-stimulated lymphocytes[2][3] or tuberculin-sensitized mouse peritoneal lymphocytes[4] challenged with PPD; the resulting supernatants were shown to inhibit growth of vesicular stomatitis virus. Those reports also contained the basic observation underlying the now widely employed interferon gamma release assay used to test for tuberculosis. In humans, the IFNγ protein is encoded by the IFNG gene.[5][6]

IFNγ, or type II interferon, is a cytokine that is critical for innate and adaptive immunity against viral, some bacterial and protozoal infections. IFNγ is an important activator of macrophages and inducer of Class II major histocompatibility complex (MHC) molecule expression. Aberrant IFNγ expression is associated with a number of autoinflammatory and autoimmune diseases. The importance of IFNγ in the immune system stems in part from its ability to inhibit viral replication directly, and most importantly from its immunostimulatory and immunomodulatory effects. IFNγ is produced predominantly by natural killer (NK) and natural killer T (NKT) cells as part of the innate immune response, and by CD4 Th1 and CD8 cytotoxic T lymphocyte (CTL) effector T cells once antigen-specific immunity develops.[7][8] IFNγ is also produced by non-cytotoxic innate lymphoid cells (ILC), a family of immune cells first discovered in the early 2010s.[9]

The IFNγ monomer consists of a core of six α-helices and an extended unfolded sequence in the C-terminal region.[10][11] This is shown in the structural models below. The α-helices in the core of the structure are numbered 1 to 6.

Figure 1. Line and cartoon representation of an IFNγ monomer.[11]

The biologically active dimer is formed by anti-parallel inter-locking of the two monomers as shown below. In the cartoon model, one monomer is shown in red, the other in blue.

Figure 2. Line and cartoon representation of an IFNγ dimer.[11] 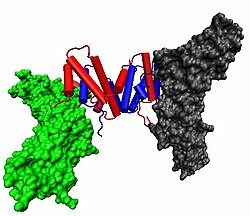 Cellular responses to IFNγ are activated through its interaction with a heterodimeric receptor consisting of Interferon gamma receptor 1 (IFNGR1) and Interferon gamma receptor 2 (IFNGR2). IFNγ binding to the receptor activates the JAK-STAT pathway. IFNγ also binds to the glycosaminoglycan heparan sulfate (HS) at the cell surface. However, in contrast to many other heparan sulfate binding proteins, where binding promotes biological activity, the binding of IFNγ to HS inhibits its biological activity.[12]

The biological significance of heparan sulfates interaction with IFNγ is unclear; however, binding of the D1 cluster to HS may protect it from proteolytic cleavage.[14]

IFNγ is secreted by T helper cells (specifically, Th1 cells), cytotoxic T cells (TC cells), macrophages, mucosal epithelial cells and NK cells. IFNγ is the only Type II interferon and it is serologically distinct from Type I interferons; it is acid-labile, while the type I variants are acid-stable.

IFNγ has antiviral, immunoregulatory, and anti-tumor properties.[15] It alters transcription in up to 30 genes producing a variety of physiological and cellular responses. Among the effects are:

A granuloma is the body's way of dealing with a substance it cannot remove or sterilize. Infectious causes of granulomas (infections are typically the most common cause of granulomas) include tuberculosis, leprosy, histoplasmosis, cryptococcosis, coccidioidomycosis, blastomycosis, and toxoplasmosis. Examples of non-infectious granulomatous diseases are sarcoidosis, Crohn's disease, berylliosis, giant-cell arteritis, granulomatosis with polyangiitis, eosinophilic granulomatosis with polyangiitis, pulmonary rheumatoid nodules, and aspiration of food and other particulate material into the lung. The infectious pathophysiology of granulomas is discussed primarily here.

Uterine Natural Killer cells (NK) secrete high levels of chemoattractants, such as IFNγ. IFNγ dilates and thins the walls of maternal spiral arteries to enhance blood flow to the implantation site. This remodeling aids in the development of the placenta as it invades the uterus in its quest for nutrients. IFNγ knockout mice fail to initiate normal pregnancy-induced modification of decidual arteries. These models display abnormally low amounts of cells or necrosis of decidua.[17]

Interferon-γ 1b is approved by the U.S. Food and Drug Administration to treat chronic granulomatous disease[20] and osteopetrosis.[21]

It was not approved to treat idiopathic pulmonary fibrosis (IPF). In 2002, the manufacturer InterMune issued a press release saying that phase III data demonstrated survival benefit in IPF and reduced mortality by 70% in patients with mild to moderate disease. The U.S. Department of Justice charged that the release contained false and misleading statements. InterMune's chief executive, Scott Harkonen, was accused of manipulating the trial data, was convicted in 2009 of wire fraud, and was sentenced to fines and community service. Harkonen appealed his conviction to the U.S. Court of Appeals for the Ninth Circuit, and lost.[22]

It is being studied at the Children’s Hospital of Philadelphia for the treatment of Friedreich's ataxia.[23]

Although not officially approved, Interferon-γ has also been shown to be effective in treating patients with moderate to severe atopic dermatitis.[24][25] [26]

Potential use in immunotherapy

Interferon gamma is not approved yet for the treatment in any cancer immunotherapy. However, improved survival was observed when Interferon gamma was administrated to patients with bladder carcinoma and melanoma cancers. The most promising result was achieved in patients with stage 2 and 3 of ovarian carcinoma. The in vitro study of IFN-gamma in cancer cells is more extensive and results indicate anti-proliferative activity of IFN-gamma leading to the growth inhibition or cell death, generally induced by apoptosis but sometimes by autophagy.[18] In addition, it has been reported that mammalian glycosylation of recombinant human interferon gamma, expressed in HEK293, improves its therapeutic efficacy compared to the unglycosylated form that is expressed in E. coli.[27]

Interferon-γ has been shown to interact with Interferon gamma receptor 1.[28][29]

Interferon-γ has been shown to be a crucial player in the immune response against some intracellular pathogens, including that of Chagas disease.[30] It has also been identified as having a role in seborrheic dermatitis.[31]

Quick links: Medicine Portal | Encyclopedia‏‎‏‎ | Gray's Anatomy‏‎ | Topics‏‎ |‏‎ Diseases‏‎ | Drugs | Wellness | Obesity‏‎ | Metabolic syndrome | Weight loss*
Disclaimer: The entire contents of WIKIMD.ORG are for informational purposes only and do not render medical advice or professional services. If you have a medical emergency, you should CALL 911 immediately! Given the nature of the wiki, the information provided may not be accurate, misleading and or incorrect. Use the information on this wiki at your own risk! See full Disclaimer.
Link to this page: <a href="http://www.wikimd.org/wiki/Interferon_gamma">Interferon gamma</a>