Kangaroo meat at the Queen Victoria Market on Melbourne

Kangaroo is a meat from any of the species of kangaroo. It is produced in Australia from wild animals and in 2010 was exported to over 55 countries worldwide.[1]

Currently most kangaroo meat is sourced from wild animals as a byproduct of population control programmes.[2][3] Both the meat and the hides are sold. Although most species of macropod are protected from hunting by law, a small number of the large-sized species which exist in high numbers can be hunted by commercial hunters.[4] This policy has been criticised by some animal rights activists.[5] On the other hand, the kangaroo harvest is supported by a wide range of professional ecologists in Australia. Groups such as the Ecological Society of Australia, the Australasian Wildlife Management Society and the Australian Mammal Society have stated their support for kangaroo harvesting. Such groups argue that basing agricultural production systems on native animals rather than introduced livestock like sheep offers considerable ecological advantages to the fragile Australian rangelands and could save greenhouse gas emissions.[6][7]

Though it is impossible to determine the exact number, government conservation agencies in each state calculate population estimates each year. Nearly 40 years of refinement has led to the development of sophisticated aerial survey techniques which enable overall populations estimates to be constructed.[8] Current estimates indicate that there may be between 35 to 50 million kangaroos in Australia.[9][10] In 2002 the number of kangaroos allowed to be shot by commercial hunters was increased from 5.5 million to 7 million per year.[11] While animal rights activists protested the move, Australian farmers claimed that kangaroos were a plague after a huge increase in their numbers.[12] A 2002 report studying the grazing pressure caused by kangaroos indicated that scientific evidence is lacking that kangaroos reduce wool production or sheep carrying capacity.[13] In 2007 the national kangaroo culling quota was more than 3.5 million[14] (but significantly down on the figures earlier in the decade).

Kangaroos are protected by legislation in Australia, both state and federal. Kangaroos are harvested by licensed shooters in accordance with a strict code of practice. Meat that is exported is inspected by the Australian Quarantine and Inspection Service (AQIS).[3][9] 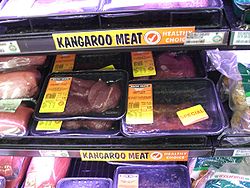 Kangaroo meat at an Australian supermarket

The kangaroo has been historically a staple source of protein for indigenous Australians. Kangaroo meat is high in protein and low in fat (about 2%). Kangaroo meat has a very high concentration of conjugated linoleic acid (CLA) when compared with other foods. CLA has been attributed with a wide range of health benefits including anti-carcinogenic and anti-diabetes properties, in addition to reducing obesity and atherosclerosis.[3][9][15]

Kangaroo meat is stronger in flavour than the meat from commercially-raised food animals. It is considered to be tender. Minced (or ground) kangaroo meat may be substituted in dishes where minced beef would normally be used.

Kangaroo meat was legalised for human consumption in South Australia in 1980, and in all other Australian states in 1993.[16] Kangaroo was once limited in availability, although consumption in Australia is becoming more widespread. However, only 14.5% of Australians were reported in 2008 as eating kangaroo meat at least four times per year.[17] Many Australian supermarkets now stock various cuts of kangaroo[3][18] including fillets, steaks, minced meat and 'Kanga Bangas' (kangaroo sausages). Some Australian restaurants serve kangaroo meat.[19]

Kangaroo meat has been exported since 1959.[17] Seventy percent of kangaroo meat is exported, particularly to the European market: Germany and France.[16] It is sold in supermarkets in England[18] and before a suspension on imports of kangaroo meat to Russia in 2009 it was widely used in Russian smallgoods.[20] In 2008, the industry is worth around A$250-270 million a year and provides around 4,000 jobs in Australia.[16][17]

The meat is also processed into dog food.[16] The small kangaroo farming community is a more environmentally friendly meat industry than sheep or cattle farming since kangaroos require no processed feed, are well-adapted to drought, and do not destroy the root systems of native grasses.[3] However kangaroo farming is economically unattractive due to the start up costs and inability of the farmed product to compete financially against animals that have been killed by hunters under the government quota system.[21]

Kangatarianism is a recent practice of following a diet which excludes meat except kangaroo on environmental and ethical grounds. Several Australian newspapers wrote about the neologism "kangatarianism" in February 2010, describing eating a vegetarian diet with the addition of kangaroo meat as a choice with environmental benefits because indigenous wild kangaroos require no extra land or water for farming and produce little methane (a greenhouse gas), unlike cattle.[22][23] Advocates of kangatarianism also choose it because Australian kangaroos live natural lives, eat organic food, and are killed humanely.[24][25] For similar reasons, Australians have discussed eating only the meat of Australian feral camels ("cameltarianism").[26]

There has been recent discussion from the kangaroo meat industry about attempting to introduce a specific culinary name for kangaroo meat, similar to the reference to pig meat as ham and pork, and calling deer meat venison. The aim is to have diners thinking of the meat rather than the animal and avoiding adverse reactions to the eating of a 'cute' animal or "eating Skippy". In 2005 the Food Companion International magazine, with support from the Kangaroo Industry Association of Australia, ran a competition hoping to find a name that wouldn't put diners off when they saw it on a menu. The three-month competition attracted over 2700 entries from 41 nations, and the name australus was decided in December 2005. The name was penned by university professor Steven West, an American about to be naturalised as an Australian citizen. Other finalists for the name included kangarly, maroo, krou, maleen, kuja, roujoe, rooviande, jurru, ozru, marsu, kep, kangasaurus, marsupan, jumpmeat, and MOM (meat of marsupials).[27]

The competition is not binding on the Kangaroo Industry Association, which has not moved to adopt the new name in any official capacity.

Kangaroo formed an important part of the traditional Aboriginal diet as a bushfood.

Kangaroo is called Kere aherre by the Arrernte people of Central Australia:

You find kangaroos in flat country or mulga country. In the old days, people used to sic their dogs on them and spear them. The milk guts are pulled out and a wooden skewer is used to close up the carcase. Then it is tossed on top of the fire to singe the hair which is scraped off, and then it's (put in a hole and) covered up with hot earth and coals. The tail and both feet are cut off before cooking. These are put in together with the rest of the carcase.

The kangaroo is chopped up so that many people can eat it. The warm blood and fluids from the gluteus medius and the hollow of the thoracic cavity are drained of all fluids. People drink these fluids, which studies have shown are quite harmless. Kangaroos are cut in a special way; into the two thighs, the two hips, the two sides of ribs, the stomach, the head, the tail, the two feet, the back and lower back. This is the way the Arrernte people everywhere cut it up.[28]

Anangu Pitjantjatjara Yankunytjatjara people of Central Australia call kangaroo "malu". They use malu mainly for meat (kuka) but other uses include materials for spear making. They are an important totem species. Red Kangaroo numbers in central Australia are very low.[29] The Angas Downs Indigenous Protected Area Rangers are currently undertaking land management activities (combination of western science and traditional knowledge) to increase this important species in the landscape. This process is named Kuka Kanyini - looking after game animals.

Quick links: Medicine Portal | Encyclopedia‏‎‏‎ | Gray's Anatomy‏‎ | Topics‏‎ |‏‎ Diseases‏‎ | Drugs | Wellness | Obesity‏‎ | Metabolic syndrome | Weight loss*
Disclaimer: The entire contents of WIKIMD.ORG are for informational purposes only and do not render medical advice or professional services. If you have a medical emergency, you should CALL 911 immediately! Given the nature of the wiki, the information provided may not be accurate, misleading and or incorrect. Use the information on this wiki at your own risk! See full Disclaimer.
Link to this page: <a href="http://www.wikimd.org/wiki/Kangaroo_meat">Kangaroo meat</a>