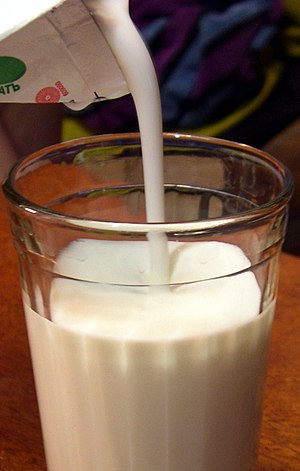 Kefir, keefir, or kephir (Script error: No such module "IPAc-en". Template:Respell),[1] alternatively milk kefir, or búlgaros, is a fermented milk drink made with kefir "grains" (a yeast/bacterial fermentation starter) and has its origins in the north Caucasus Mountains.[citation needed] It is prepared by inoculating cow, goat, or sheep milk with kefir grains. Traditional kefir was made in skin bags that were hung near a doorway; the bag would be knocked by anyone passing through the doorway to help keep the milk and kefir grains well mixed.[2]

The word kefir,[3] existing in modern Russian (since at least 1884),[4] Polish and English, is probably from a North Caucasian language (although some sources see a connection to Turkic köpür (foam)[5]) and has become the most commonly used name, although it is known in other regions by various names.

Kefir grains are a combination of lactic acid bacteria and yeasts in a matrix of proteins, lipids, and sugars, and this symbiotic matrix, or (SCOBY) forms "grains" that resemble cauliflower. For this reason, a complex and highly variable community of lactic acid bacteria and yeasts can be found in these grains although some predominant; Lactobacillus species are always present.[6]

Kefir grains contain a water-soluble polysaccharide known as kefiran, which imparts a rope-like texture and feeling in the mouth. The grains range in color from white to yellow, and may grow to the size of walnuts.

The composition of kefir depends greatly on the type of milk that was fermented, including the concentration of vitamin B12.

During the fermentation, changes in composition of nutrients and other ingredients occur. Lactose, the sugar present in milk, is broken down mostly to Lactic acid (25%) by the lactic acid bacteria. Propionibacteria further break down some of the lactic into propionic acid (these bacteria also carry out the same fermentation in Swiss Cheese). Other substances that contribute to the flavor of kefir are pyruvic acid, acetic acid, diacetyl and acetoin (both of which contribute a "buttery" flavor), citric acid, acetaldehyde and amino acids resulting from protein breakdown.[8]

The slow-acting yeasts, late in the fermentation process, break lactose down into ethanol and carbon dioxide: depending on the process, ethanol concentration can be as high as 1-2% (achieved by small-scale dairies early in the 20th century), with the kefir having a bubbly appearance and carbonated taste: most modern processes, which use shorter fermentation times, result in much lower ethanol concentrations of 0.2-0.3%.

As a result of the fermentation, very little lactose remains in kefir. People with lactose intolerance are able to tolerate kefir, providing the number of live bacteria present in this beverage consumed is high enough (i.e., fermentation has proceeded for adequate time). It has also been shown that fermented milk products have a slower transit time than milk, which may further improve lactose digestion.[9]

For the preparation of the present factory-produced kefir, the so-called kefir mild, kefir grains are no longer used, but a precise composed mixture of different bacteria and yeast, allowing the flavor to be kept constant.

Traditional kefir is fermented at ambient temperatures, generally overnight. Fermentation of the lactose yields a sour, carbonated, slightly alcoholic beverage, with a consistency and taste similar to thin yogurt.[10]

Variations that thrive in various other liquids exist, and they vary markedly from kefir in both appearance and microbial composition. Water kefir (or tibicos) is grown in water with sugar (sometimes with added dry fruit such as figs, and lemon juice) for a day or more at room temperature. 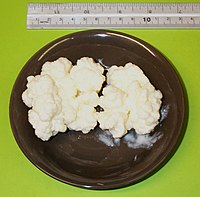 Production of traditional kefir requires a starter community of kefir grains which are added to the liquid one wishes to ferment. Kefir grains cannot be produced from scratch, but the grains grow during fermentation, and additional grains are produced. Kefir grains can be bought from or donated by other growers.

The traditional, or artisanal, method of making kefir is achieved by directly adding kefir grains (2–10%) to milk in a covered acid proof container which is traditionally agitated one or more times a day. It is not filled to capacity, allowing room for some expansion as the kefiran and carbon dioxide gas produced causes the liquid level to rise. If the container is not light proof it should be stored in the dark to prevent degradation of vitamins and inhibition of the culture. After a period of fermentation lasting around 24 hours, ideally at 20–25 °C (68–77 °F)[citation needed], the grains are removed from the liquid by straining using a non-corrosive straining utensil which can be stainless steel or food grade plastic and reserved as the starter for a fresh amount of liquid. The temperature during fermentation is not critical as long as it is not above one that will kill the culture (about 40 °C / 104 °F), or much below 4 °C (39 °F) where the process will cease.[citation needed]

The fermented liquid which contains live microflora from the grain, may now be consumed as a beverage, used in recipes, or kept aside for several days to undergo a slower secondary fermentation which further thickens and sours the liquid. Without refrigeration, the shelf life is up to thirty days.[11] The grains will enlarge in the process of kefir production, and eventually split. Grains can be dried at room temperature or lyophilized (freeze-dried) or frozen.[citation needed]

The Russian method permits production of kefir on a larger scale, and uses two fermentations. The first step is to prepare the cultures by incubating milk with grains (2–3%), as just described. The grains are then removed by filtration and the resulting liquid mother culture is added to milk (1–3%) which is fermented for 12 to 18 hours.[12]

Kefir can be produced using lyophilized cultures commonly available as a powder from health food shops. A portion of the resulting kefir can be saved to be used a number of times to propagate further fermentations but ultimately does not form grains, and a fresh culture must be obtained.[citation needed]

Recent research revealed kefir grains that were cultured in a medium which had been contaminated with the coliform bacteria E. coli actually inhibited the growth of this organism. It was shown that certain batches of kefir grains completely suppressed the growth of E. coli for a period of at least 25 hours.[13][14]

Research in the former USSR showed pasteurised milk, kefir and tvorog samples from Moscow dairies that were purposely infected with 18-24 hour cultures of 8 strains of faecal coliform bacteria, Shigella sonnei. The organism was found in all three products after a dilution with peptone water, after which 0.5ml was plated on Ploskireva medium and the same volume into Endo medium and incubated at 37 °C for 18–24 hours. Pasteurised milk and tvorog samples contained quantities of the organism greater than 10,000 colony forming units per ml [cfu/ml],but in kefir only in quantities of less than 1,000 cfu/ml. The results concluded that the growth of the secondary microflora [Shigella sonnei] in milk and tvorog was found to be in excessive quantities.[15]

One can possibly change the nutrient content of kefir by simply fermenting for shorter or longer periods, possibly with each stage providing value. For instance, kefir over-ripened (which increases the sour taste) significantly increases folic acid content.[16] One study showed that kefir also may aid in lactose digestion as a catalyst.[17] However, the study showed that there is simply a lower amount of lactose in kefir than in whole milk, with lactose still having an effect on lactose-intolerant subjects. Flatulence, the most commonly reported symptom of lactose consumption, was shown to be lower by 50% after the consumption of kefir compared to the consumption of milk.[18]

Researcher Steven Hertzler stated: "Both kefir and yogurt improve lactose digestion simply because some of the bacterial cells give up their lives in the intestinal tract, release their enzymes and digest the lactose. It's a one-shot deal. However, kefir has additional microorganisms that may be able to colonize the intestines and benefit health further by protecting the intestine against disease-causing bacteria."[18]

The kefiran in kefir has been shown in one study to suppress an increase in blood pressure and reduce serum cholesterol levels in rats.[19]

Kefir contains compounds that have antimutagenic and antioxidant properties in vitro, although it is not established that these compounds have any physiological properties when kefir is consumed.[20]

Historically, kefir has been recommended for the treatment of several clinical conditions such as gastrointestinal problems, hypertension, allergies, and ischemic heart disease. However, the variability inherent in kefir production conditions in different assays makes it difficult to conduct comparisons between reported scientific results.[21]

Kefir is a drink popular across Eastern and Northern Europe.

In Chile, where it is known as "yogurt de pajaritos" (little bird's yogurt), kefir has been regularly consumed for over a century; it might have been introduced by one of the various waves of migrants from the former Ottoman empire and migrants from Eastern Europe.

The alleged health benefits of kefir have recently been popularized in North America, Australia, and the United Kingdom, and kefir can be found in pasteurized form in many stores and supermarkets.

A glass of kefir in a Polish café

Kefir grains will ferment the milk from most mammals, and will continue to grow in such milk. Typical milks used include cow, goat, and sheep, each with varying organoleptic and nutritional qualities. Raw milk has been traditionally used.

Kefir grains will also ferment milk substitutes such as soy milk, rice milk, and coconut milk, as well as other sugary liquids including fruit juice, coconut water, beer wort and ginger beer. However, the kefir grains may cease growing if the medium used does not contain all the growth factors required by the bacteria.

Milk sugar is not essential for the synthesis of the polysaccharide that makes up the grains (kefiran), and studies have shown that rice hydrolysate is a suitable alternative medium.[22] Additionally, it has been shown that kefir grains will reproduce when fermenting soy milk, although they will change in appearance and size due to the differing proteins available to them.[23]

As it contains lactobacilli bacteria, kefir can be used to make a sourdough bread. It is also useful as a buttermilk substitute in baking. Kefir is one of the main ingredients in cold borscht in Lithuania. Other variations of kefir soups and foods prepared with kefir are popular across the former Soviet Union and Poland. Kefir may be used in place of milk on cereal or granola.

One group of researchers[24] wrote:

Motaghi et al. (1997)[25] produced kefir grains in a goat-hide bag using pasteurized milk inoculated with sheep intestinal flora, followed by culture on the surface of milk. Despite intensive research and many attempts to produce kefir grains from the pure or mixed cultures that are normally present in the grains, no successful results have been reported to date. This failure can probably be ascribed to the fact that little is known about the mechanism of grain formation.

Other research indicated that kefir grains are carbohydrates of bacterial origin produced by lactobacilli from within the matrix, forming sheet-like structures that become a grain.[26]

More recently investigators have postulated that small kefir granules form initially from auto-aggregations of lactobacilli and yeast, followed by a biofilm created by the adherence of additional bacteria and yeasts to the granule exterior.[27]

Quick links: Medicine Portal | Encyclopedia‏‎‏‎ | Gray's Anatomy‏‎ | Topics‏‎ |‏‎ Diseases‏‎ | Drugs | Wellness | Obesity‏‎ | Metabolic syndrome | Weight loss*
Disclaimer: The entire contents of WIKIMD.ORG are for informational purposes only and do not render medical advice or professional services. If you have a medical emergency, you should CALL 911 immediately! Given the nature of the wiki, the information provided may not be accurate, misleading and or incorrect. Use the information on this wiki at your own risk! See full Disclaimer.
Link to this page: <a href="http://www.wikimd.org/wiki/Kefir">Kefir</a>