From WikiMD
Share
Not to be confused with laser hair removal.

Laser surgery is a type of surgery that uses a laser (in contrast to using a scalpel) to cut tissue.

Examples include the use of a laser scalpel in otherwise conventional surgery, and soft-tissue laser surgery, in which the laser beam vaporizes soft tissue with high water content.

Laser surgery is commonly used on the eye. Techniques used include LASIK, which is used to correct near and far-sightedness in vision, and photorefractive keratectomy, a procedure which permanently reshapes the cornea using an excimer laser to remove a small amount of the human tissue.[1][2][3]

Types of surgical lasers include carbon dioxide, argon, Nd:YAG laser, and potassium titanyl phosphate, from among others. 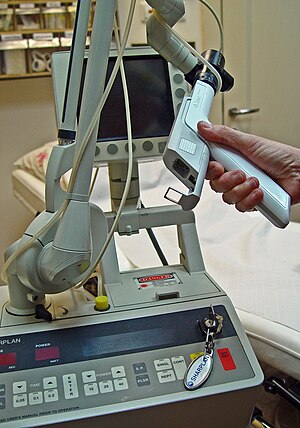 Surgical laser systems, sometimes called "laser scalpels", are differentiated not only by the wavelength, but also by the light delivery system: flexible fiber or articulated arm, as well as by other factors.[4]

CO2 lasers were the dominant soft-tissue surgical lasers as of 2010.[5]

Soft-tissue laser surgery is used in a variety of applications in human (general surgery, neurosurgery, ENT, dentistry, orthodontics,[6] and oral and maxillofacial surgery as well as veterinary[7] surgical fields. The primary uses of lasers in soft tissue surgery is to cut, ablate, vaporize, and coagulate. There are several different laser wavelengths used in soft tissue surgery. Different laser wavelengths and device settings (such as pulse duration and power) produce different effects on the tissue. Some commonly used lasers types in soft tissue surgery include erbium, diode, and CO2. Erbium lasers are excellent cutters, but provide minimal hemostasis. Diode lasers (hot tip) provide excellent hemostasis, but are slow cutters. CO2 lasers are both efficient at cutting and coagulating.[8]

A range of lasers such as erbium, dye, Q switch lasers and CO2 are used to treat various skin conditions including scars, vascular and pigmented lesions, and for photorejuvenation. The laser surgery for dermatology often bypass the skin surface. The principle of laser surgery for dermatologic problem is based on SPTL (selective photothermolysis). The laser beam penetrates the skin until it encounters chromophore which absorbs the laser beam. After absorption of the laser beam, heat is generated to induce coagulation, necrosis of the targeted tissue, this results in removal of unwanted tissue by laser surgery.

Laser resurfacing is a technique in which covalent bonds of a material are dissolved by a laser, a technique invented by aesthetic plastic surgeon Thomas L. Roberts, III using CO2 lasers in the 1990s.[9][10]

Various types of laser surgery are used to treat refractive error. LASIK, in which a knife is used to cut a flap in the cornea, and a laser is used to reshape the layers underneath, is used to treat refractive error. IntraLASIK is a variant in which the flap is also cut with a laser. In photorefractive keratectomy (PRK, LASEK), the cornea is reshaped without first cutting a flap. In laser thermal keratoplasty, a ring of concentric burns is made in the cornea, which cause its surface to steepen, allowing better near vision.

Lasers are also used to treat non-refractive conditions, such as phototherapeutic keratectomy (PTK) in which opacities and surface irregularities are removed from the cornea and laser coagulation in which a laser is used to cauterize blood vessels in the eye, to treat various conditions. Lasers can be used to repair tears in the retina.

Laser endarterectomy is a technique in which an entire atheromatous plaque in the artery is excised. Other applications include laser assisted angioplasties and laser assisted vascular anastomosis.

Lasers are used to treat several disorders in foot and ankle surgery. They are used to remove benign and malignant tumors,[12] treat bunions,[13] debride ulcers and burns, excise epidermal nevi, blue rubber bleb nevi, and keloids, and the removal of hypertrophic scars and tattoos.[14]

The CO2 laser is used in oral and dental surgery for virtually all soft-tissue procedures, such as gingivectomies, vestibuloplasties, frenectomies and operculectomies.[16][17] The CO2 10,600 nm wavelength is safe around implants as it is reflected by titanium, and thus has been gaining popularity in the field of periodontology. The laser may also be effective in treating peri-implantitis.[18]

Laser spine surgery first began seeing clinical use in the 1980s and was primarily used within discectomy to treat lumbar disc disease under the notion that heating a bulging disc vaporized enough tissue to relieve pressure on the nerves and help alleviate pain.[19][20]

Since that time, laser spine surgery has become one of the most marketed forms of minimally invasive spine surgery, despite the fact that it has never been studied in a controlled clinical trial to determine its effectiveness apart from disc decompression.[21][22] Evidence-based data surrounding the use of lasers in spine surgery is limited and its safety and efficacy were poorly understood as of 2017.[23][24]

In thoracic surgery, surgical laser applications are most often used for to remove pulmonary metastases and tumors of different primary localizations.[25] Other areas of application are surgical sectioning of the parenchyma, anatomic segmental resections, removal of tumors from the thoracic wall[26] and abrasion of the pleura parietalis. Since the introduction of surgical lasers the amount of potentially surgically resectable pulmonary nodules has significantly increased.[27] Compared to laser surgery, other conventional surgical methods such as segmental or wedge resections with surgical stapling will normally lead to a bigger loss of lung tissue, especially in patients with multiple pulmonary nodules methods.[28]

Other advantages of laser surgery compared to conventional methods are that it leads to an improved post operative lung function and that it gives the additional possibility to histologically analyze the removed material which would otherwise be destroyed through radiation or heat.

Lasers are used to cut or ablate bones and teeth in dentistry.[29]

Quick links: Medicine Portal | Encyclopedia‏‎‏‎ | Gray's Anatomy‏‎ | Topics‏‎ |‏‎ Diseases‏‎ | Drugs | Wellness | Obesity‏‎ | Metabolic syndrome | Weight loss*
Disclaimer: The entire contents of WIKIMD.ORG are for informational purposes only and do not render medical advice or professional services. If you have a medical emergency, you should CALL 911 immediately! Given the nature of the wiki, the information provided may not be accurate, misleading and or incorrect. Use the information on this wiki at your own risk! See full Disclaimer.
Link to this page: <a href="http://www.wikimd.org/wiki/Laser_surgery">Laser surgery</a>