From WikiMD
Jump to navigation Jump to search
Share
For other uses, see Lassi (disambiguation).

Lassi (Template:IPA-hns) is a popular, traditional, yogurt-based drink from Bangladesh, India and Pakistan. Lassi is a blend of yogurt, water, spices and sometimes, fruit. Traditional lassi (a.k.a., "salted lassi", or simply, "lassi") is a savoury drink, sometimes flavoured with ground and roasted cumin. Sweet lassi, however, contains sugar or fruits, instead of spices.

In Dharmic religions, yogurt sweetened with honey is used while performing religious rituals. Less common is lassi served with milk and topped with a thin layer of clotted cream. Lassis are enjoyed chilled as a hot-weather refreshment, mostly taken with lunch. With a little turmeric powder mixed in, it is also used as a folk remedy for gastroenteritis. 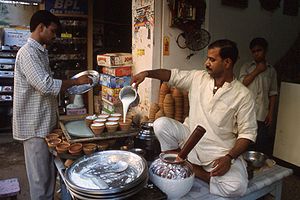 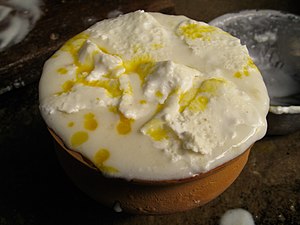 This form of lassi is more common in the villages of Punjab and north India. It is prepared by blending yogurt with water and adding sugar and other spices to taste. Salt can be substituted in place of sugar. The resulting beverage is known as salted lassi. This is similar to ayran or doogh.

Sweet lassi is a form of lassi flavoured with sugar, rosewater and/or lemon, strawberry or other fruit juices. Saffron lassis, which are particularly rich, are a specialty of Sindh in Pakistan, and Jodhpur and Rajasthan in India. Makkhaniya lassi is simply lassi with lumps of butter in it (makkhan is the Gujarati, Hindi and Punjabi word for butter). It is usually creamy like a milkshake.

Mango lassi is gaining popularity worldwide. It is made from yogurt, water and mango pulp. It may be made with or without additional sugar. It is widely available in UK, Malaysia and Singapore, and in many other parts of the world. In various parts of Canada, mango lassi is a cold drink consisting of sweetened kesar mango pulp mixed with yogurt, cream, or ice cream. It is served in a tall glass with a straw, often with ground pistachio nuts sprinkled on top.[1]

Bhang (or bhung) lassi is a special lassi that contains bhang, a liquid derivative of cannabis, which has effects similar to other eaten forms of cannabis. It is legal in many parts of India and mainly sold during Holi, when pakoras containing bhang are also sometimes eaten. Uttar Pradesh is known to have licensed bhang shops, and in many places one can buy bhang products and drink bhang lassis.[2]

Chaas or chaach is a salted drink like lassi; however, chaas contains more water than lassi and has the butterfat removed, so its consistency is not as thick as lassi. Salt and Jeera (cumin seeds) are normally added for taste and sometimes even fresh coriander. Fresh ground ginger & green chillies may also be added as seasoning. Chaas is popular in the Indian states Gujarat and Rajasthan, where it is drunk with the main meal, and was known to aid digestion[3] and is an excellent coolant in the Indian and Pakistani summers .[citation needed] It is called 'majjige' in Kannada, 'taak' in Marathi, 'majjiga' in Telugu, 'moru' in Tamil and Malayalam, Mahi in Madheshi languages, and 'ghol' in Bengali.

A 2008 print[4] and television[5][6] ad campaign for HSBC, written by Jeffree Benet of JWT Hong Kong, tells a tale of a Polish washing machine manufacturer's representative sent to India to discover why their sales are so high there. On arriving, the representative investigates a lassi parlor, where he is warmly welcomed, and finds several washing machines being used to mix it. The owner tells him he is able to "make ten times as much lassi as I used to!"

In 2013, Kshitij, the annual techno-management fest of IIT Kharagpur, has launched a campaign to name next version of Android, Lassi.[7]

Quick links: Medicine Portal | Encyclopedia‏‎‏‎ | Gray's Anatomy‏‎ | Topics‏‎ |‏‎ Diseases‏‎ | Drugs | Wellness | Obesity‏‎ | Metabolic syndrome | Weight loss*
Disclaimer: The entire contents of WIKIMD.ORG are for informational purposes only and do not render medical advice or professional services. If you have a medical emergency, you should CALL 911 immediately! Given the nature of the wiki, the information provided may not be accurate, misleading and or incorrect. Use the information on this wiki at your own risk! See full Disclaimer.
Link to this page: <a href="http://www.wikimd.org/wiki/Lassi">Lassi</a>