Low-carbohydrate diets are associated with increased mortality, and they can miss out on the health benefits afforded by high-quality carbohydrate such as is found in legumes including grain legumes or pulses, and fruit and vegetables.[3][4] Disadvantages of the diet might include halitosis, headache and constipation, and in general the potential adverse effects of the diet are under-researched, particularly for more serious possible risks such as for bone health and cancer incidence.[5]

Carbohydrate-restricted diets can be as effective, or marginally more effective, than low-fat diets in helping achieve weight loss in the short term.[6] In the long term, effective weight maintenance depends on calorie restriction, not the ratio of macronutrients in a diet.[7] The hypothesis proposed by diet advocates that carbohydrate causes undue fat accumulation via the medium of insulin, and that low-carbohydrate diets have a "metabolic advantage", has been falsified by experiment.[8][6]

It is not clear how low-carbohydrate dieting affects cardiovascular health; any benefit from HDL cholesterol might be offset by raised LDL cholesterol, which risks causing clogged arteries in the long term.[9][10]

Carbohydrate-restricted diets are no more effective than a conventional healthy diet in preventing the onset of type 2 diabetes, but for people with type 2 diabetes they are a viable option for losing weight or helping with glycemic control.[11][12][13] There is little evidence that low-carbohydrate dieting is helpful in managing type 1 diabetes.[1] The American Diabetes Association recommends that people with diabetes should adopt a generally healthy diet, rather than a diet focused on carbohydrate or other macronutrients.[13]

An extreme form of low-carbohydrate diet – the ketogenic diet – is established as a medical diet for treating epilepsy.[14] Through celebrity endorsement it has become a popular weight-loss fad diet, but there is no evidence of any distinctive benefit for this purpose, and it may have a number of initial side effects.[14] The British Dietetic Association named it one of the "top 5 worst celeb diets to avoid in 2018".[14]

The macronutrient ratios of low-carbohydrate diets are not standardized.[15][16] Template:Asof the conflicting definitions of "low-carbohydrate" diets have complicated research into the subject.[1][17] 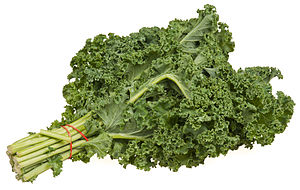 Like other leafy vegetables, curly kale is a foodstuff that is low in carbohydrate.

There is evidence that the quality, rather than the quantity, of carbohydrate in a diet is important for health, and that high-fiber slow-digesting carbohydrate-rich foods are healthful while highly-refined and sugary foods are less so.[4] People choosing diet for health conditions should have their diet tailored to their individual requirements.[20] For people with metabolic conditions, a diet with approximately 40-50% carbohydrate is recommended.[20]

The National Academy of Medicine recommends a minimum intake of 130 g of carbohydrate per day.[21] The FAO and WHO similarly recommend that the majority of dietary energy come from carbohydrates.[22][23] Low-carbohydrate diets are not an option recommended in the 2015-2020 edition of Dietary Guidelines for Americans, which instead recommends a low fat diet.

Carbohydrate has been wrongly accused of being a uniquely "fattening" macronutrient, misleading many dieters into compromising the nutritiousness of their diet by eliminating carbohydrate-rich food.[24] Low-carbohydrate diet proponents emphasize research saying that low-carbohydrate diets can initially cause slightly greater weight loss than a balanced diet, but some studies suggest that such an advantage does not persist.[24][6] In the long-term successful weight maintenance is determined by calorie intake, and not by macronutrient ratios.[7][6]

The public has become confused by the way in which some diets, such as the Zone diet and the South Beach diet are promoted as "low-carbohydrate" when in fact they would more properly be termed "medium" carbohydrate diets.[25]

Low-carbohydrate diet advocates including Gary Taubes and David Ludwig have proposed a "carbohydrate-insulin hypothesis" in which carbohydrate is said to be uniquely fattening because it raises insulin levels and so causes fat to accumulate unduly.[8][26] The hypothesis appears to run counter to known human biology whereby there is no good evidence of any such association between the actions of insulin and fat accumulation and obesity.[6] The hypothesis predicted that low-carbohydrate dieting would offer a "metabolic advantage" of increased energy expenditure equivalent to 400-600 kcal/day, in accord with the promise of the Atkin's diet: a "high calorie way to stay thin forever".[8]

With funding from the Laura and John Arnold Foundation, in 2012 Taubes co-founded the Nutrition Science Initiative (NuSI), with the aim of raising over $200 million to undertake a "Manhattan Project for nutrition" and validate the hypothesis.[27][28] Intermediate results, published in the American Journal of Clinical Nutrition did not provide convincing evidence of any advantage to a low-carbohydrate diet as compared to diets of other composition – ultimately a very low-calorie, ketogenic diet (of 5% carbohydrate) "was not associated with significant loss of fat mass" compared to a non-specialized diet with the same calories; there was no useful "metabolic advantage".[6][8] In 2017 Kevin Hall, a NIH researcher hired to assist with the project, wrote that the carbohydrate-insulin hypothesis had been falsified by experiment.[26][8] Hall wrote "the rise in obesity prevalence may be primarily due to increased consumption of refined carbohydrates, but the mechanisms are likely to be quite different from those proposed by the carbohydrate–insulin model".[8]

It has been repeatedly found that in the long-term, all diets with the same calorific value perform the same for weight loss, except for the one differentiating factor of how well people can faithfully follow the dietary programme.[25] A study comparing groups taking low-fat, low-carbohydrate and Mediterranean diets found at six months the low-carbohydrate diet still had most people adhering to it, but thereafter the situation reversed: at two years the low-carbohydrate group had the highest incidence of lapses and dropouts.[25] This may be due to the comparatively limited food choice of low-carbohydrate diets.[25]

Studies have shown that people losing weight with a low-carbohydrate diet, compared to a low-fat diet, have very slightly more weight loss initially, equivalent to approximately 100kcal/day, but that the advantage diminishes over time and is ultimately insignificant.[6] The Endocrine Society state that "when calorie intake is held constant [...] body-fat accumulation does not appear to be affected by even very pronounced changes in the amount of fat vs carbohydrate in the diet."[6]

There is only poor-quality evidence of the effect of different diets on reducing or preventing high blood pressure, but it suggests the low-carbohydrate diet is among the better-performing ones, while the DASH diet performs best.[30]

There is little evidence for the effectiveness of low-carbohydrate diets for people with type 1 diabetes.[1] For certain individuals, it may be feasible to follow a low-carbohydrate regime combined with carefully-managed insulin dosing, this can be hard to maintain and there are concerns about potential adverse health effects caused by the diet.[1] In general, people with type 1 diabetes are advised to follow an individualized eating plan.[1]

Limiting carbohydrate consumption generally results in improved glucose control, although without long-term weight loss.[35] Low-carbohydrate diets can be useful to help people with type 2 diabetes lose weight, but that "no single approach has been proven to be consistently superior".[13] According to the ADA, people with diabetes should be "developing healthy eating patterns rather than focusing on individual macronutrients, micronutrients, or single foods". They recommended that the carbohydrates in a diet should come from "vegetables, legumes, fruits, dairy (milk and yogurt), and whole grains", while highly-refined foods and sugary drinks should be avoided.[13]

A low-carbohydrate diet has been found to reduce endurance capacity for intense exercise efforts, and depleted muscle glycogen following such efforts is only slowly replenished if a low-carbohydrate diet is taken.[36] Inadequate carbohydrate intake during athletic training causes metabolic acidosis, which may be responsible for the impaired performance which has been observed.[36]

The ketogenic diet is a high-fat, low-carbohydrate diet used to treat drug-resistant childhood epilepsy.[37][19] In the 2010s, it became a fad diet for people wanting to lose weight.[19] Users of the ketogenic diet may not achieve sustainable weight loss, as this requires strict carbohydrate abstinence, and maintaining the diet is difficult.[11][19] Possible risks of using the ketogenic diet over the long term may include kidney stones, osteoporosis, or increased levels of uric acid, a risk factor for gout.[19]

Ketogenic diet (low carbohydrate diet) practice for weight loss has reportedly increased mortality rate (especially from cancer and cardiovascular disease), but mortality increase was only associated with animal-based diets, whereas mortality was reduced with plant-based diets.[38][39]

In a comprehensive systematic review of 2018, Churuangsuk and colleagues reported that other case reports give rise to concerns of other potential risks of low-carbohydrate dieting including hyperosmolar coma, Wernicke's encephalopathy, optic neuropathy from thiamine deficiency, acute coronary syndrome and anxiety disorder.[5]

Significantly restricting the proportion of carbohydrate in diet risks causing malnutrition, and can make it difficult to get enough dietary fiber to stay healthy.[41]

In 1797, John Rollo reported on the results of treating two diabetic Army officers with a low-carbohydrate diet and medications. A very low-carbohydrate, ketogenic diet was the standard treatment for diabetes throughout the nineteenth century.[43][44]

In 1863, William Banting, a formerly obese English undertaker and coffin maker, published "Letter on Corpulence Addressed to the Public", in which he described a diet for weight control giving up bread, butter, milk, sugar, beer, and potatoes.[45] His booklet was widely read, so much so that some people used the term "Banting" for the activity now called "dieting".[46]

In the early 1900s Frederick Madison Allen developed a highly restrictive short term regime which was described by Walter R. Steiner at the 1916 annual convention of the Connecticut State Medical Society as The Starvation Treatment of Diabetes Mellitus.[47]:176–177[48][49] This diet was often administered in a hospital in order to better ensure compliance and safety.[47]:179

Other low-carbohydrate diets in the 1960s included the Air Force diet[50] and the Drinking Man's Diet.[51] In 1972, Robert Atkins published Dr. Atkins Diet Revolution, which advocated the low-carbohydrate diet he had successfully used in treating people in the 1960s.[52] The book was a publishing success, but was widely criticized by the mainstream medical community as being dangerous and misleading, thereby limiting its appeal at the time.[53]

The concept of the glycemic index was developed in 1981 by David Jenkins to account for variances in speed of digestion of different types of carbohydrates. This concept classifies foods according to the rapidity of their effect on blood sugar levels – with fast-digesting simple carbohydrates causing a sharper increase and slower-digesting complex carbohydrates, such as whole grains, a slower one.[54]

In 1992, Atkins published an update from his 1972 book, Dr. Atkins New Diet Revolution, and other doctors began to publish books based on the same principles.[55] During the late 1990s and early 2000s, low-carbohydrate diets became some of the most popular diets in the US. By some accounts, up to 18% of the population was using one type of low-carbohydrate diet or another at the peak of their popularity.[56] Food manufacturers and restaurant chains noted the trend, as it affected their businesses.[57] Parts of the mainstream medical community have denounced low-carbohydrate diets as being dangerous to health, such as the AHA in 2001,[58] and the American Kidney Fund in 2002.[59]

Quick links: Medicine Portal | Encyclopedia‏‎‏‎ | Gray's Anatomy‏‎ | Topics‏‎ |‏‎ Diseases‏‎ | Drugs | Wellness | Obesity‏‎ | Metabolic syndrome | Weight loss*
Disclaimer: The entire contents of WIKIMD.ORG are for informational purposes only and do not render medical advice or professional services. If you have a medical emergency, you should CALL 911 immediately! Given the nature of the wiki, the information provided may not be accurate, misleading and or incorrect. Use the information on this wiki at your own risk! See full Disclaimer.
Link to this page: <a href="http://www.wikimd.org/wiki/Low-carbohydrate_diet">Low-carbohydrate diet</a>