From WikiMD
Share
This page contains changes which are not marked for translation. 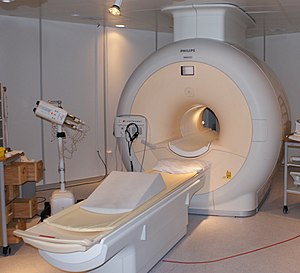 MRI is a non-invasive imaging technology that produces three dimensional detailed anatomical images. It is often used for disease detection, diagnosis, and treatment monitoring. It is based on sophisticated technology that excites and detects the change in the direction of the rotational axis of protons found in the water that makes up living tissues.

How does MRI work?

To obtain an MRI image, a patient is placed inside a large magnet and must remain very still during the imaging process in order not to blur the image. Contrast agents (often containing the element Gadolinium) may be given to a patient intravenously before or during the MRI to increase the speed at which protons realign with the magnetic field. The faster the protons realign, the brighter the image.

What is MRI used for?

MRI scanners are particularly well suited to image the non-bony parts or soft tissues of the body. They differ from computed tomography (CT), in that they do not use the damaging ionizing radiation of x-rays. The brain, spinal cord and nerves, as well as muscles, ligaments, and tendons are seen much more clearly with MRI than with regular x-rays and CT; for this reason MRI is often used to image knee and shoulder injuries.

In the brain, MRI can differentiate between white matter and grey matter and can also be used to diagnose aneurysms and tumors. Because MRI does not use x-rays or other radiation, it is the imaging modality of choice when frequent imaging is required for diagnosis or therapy, especially in the brain. However, MRI is more expensive than x-ray imaging or CT scanning.

One kind of specialized MRI is functional Magnetic Resonance Imaging (fMRI.) This is used to observe brain structures and determine which areas of the brain “activate” (consume more oxygen) during various cognitive tasks. It is used to advance the understanding of brain organization and offers a potential new standard for assessing neurological status and neurosurgical risk.

Although MRI does not emit the ionizing radiation that is found in x-ray and CT imaging, it does employ a strong magnetic field. The magnetic field extends beyond the machine and exerts very powerful forces on objects of iron, some steels, and other magnetizable objects; it is strong enough to fling a wheelchair across the room. Patients should notify their physicians of any form of medical or implant prior to an MR scan.

When having an MRI scan, the following should be taken into consideration:

What are examples of NIBIB-funded projects in MRI?

Chronic liver disease and cirrhosis affect more than 5.5 million people in the United States. NIBIB-funded researchers have developed a method to turn sound waves into images of the liver, which provides a new non-invasive, pain-free approach to find tumors or tissue damaged by liver disease. The Magnetic Resonance Elastography (MRE) device is placed over the liver of the patient before he enters the MRI machine. It then pulses sound waves through the liver, which the MRI is able to detect and use to determine the density and health of the liver tissue. This technique is safer and more comfortable for the patient as well as being less expensive than a traditional biopsy. Since MRE is able to recognize very slight differences in tissue density, there is the potential that it could also be used to detect cancer.

MRI is potentially one of the best imaging modalities for children since unlike CT, it does not have any ionizing radiation that could potentially be harmful. However, one of the most difficult challenges that MRI technicians face is obtaining a clear image, especially when the patient is a child or has some kind of ailment that prevents them from staying still for extended periods of time. As a result, many young children require anesthesia, which increases the health risk for the patient. NIBIB is funding research that is attempting to develop a robust pediatric body MRI. By creating a pediatric coil made specifically for smaller bodies, the image can be rendered more clearly and quickly and will demand less MR operator skill. This will make MRIs cheaper, safer, and more available to children. The faster imaging and motion compensation could also potentially benefit adult patients as well.

Another NIBIB-funded researcher is trying to solve this problem from a different angle. He is developing a motion correction system that could greatly improve image quality for MR exams. Researchers are developing an optical tracking system that would be able to match and adapt the MRI pulses to changes in the patient’s pose in real time. This improvement could reduce cost (since less repeat MR exams will have to take place due to poor quality) as well as make MRI a viable option for many patients who are unable to remain still for the exam and reduce the amount of anesthesia used for MR exams.

Determining the aggressiveness of a tumor

Traditional MRI, unlike PET or SPECT, cannot measure metabolic rates. However, researchers funded by NIBIB have discovered a way to inject specialized compounds (hyperpolarized carbon 13) into prostate cancer patients to measure the metabolic rate of a tumor. This information can provide a fast and accurate picture of the tumor’s aggressiveness. Monitoring disease progression can improve risk prediction, which is critical for prostate cancer patients who often adopt a wait and watch approach.

Help WikiMD:Join WikiMD as an an editor and help improve the page MRI or others.

Quick links: Medicine Portal | Encyclopedia‏‎‏‎ | Gray's Anatomy‏‎ | Topics‏‎ |‏‎ Diseases‏‎ | Drugs | Wellness | Obesity‏‎ | Metabolic syndrome | Weight loss*
Disclaimer: The entire contents of WIKIMD.ORG are for informational purposes only and do not render medical advice or professional services. If you have a medical emergency, you should CALL 911 immediately! Given the nature of the wiki, the information provided may not be accurate, misleading and or incorrect. Use the information on this wiki at your own risk! See full Disclaimer.
Link to this page: <a href="http://www.wikimd.org/wiki/MRI">MRI</a>