Malaria is a parasitic disease spread by mosquitos that causes chills and fever; potentially fatal complications in the liver, kidneys, blood, and brain are possible.

Infection with malaria parasites may result in a wide variety of symptoms, ranging from absent or very mild symptoms to severe disease and even death. Malaria disease can be categorized as uncomplicated or severe (complicated). In general, malaria is a curable disease if diagnosed and treated promptly and correctly.

All the clinical symptoms associated with malaria are caused by the asexual erythrocytic or blood stage parasites. When the parasite develops in the erythrocyte, numerous known and unknown waste substances such as hemozoin pigment and other toxic factors accumulate in the infected red blood cell. These are dumped into the bloodstream when the infected cells lyse and release invasive merozoites. The hemozoin and other toxic factors such as glucose phosphate isomerase (GPI) stimulate macrophages and other cells to produce cytokines and other soluble factors which act to produce fever and rigors and probably influence other severe pathophysiology associated with malaria. 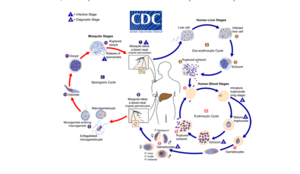 Plasmodium falciparum-infected erythrocytes, particularly those with mature trophozoites, adhere to the vascular endothelium of venular blood vessel walls and do not freely circulate in the blood. When this sequestration of infected erythrocytes occurs in the vessels of the brain it is believed to be a factor in causing the severe disease syndrome known as cerebral malaria, which is associated with high mortality.

Following the infective bite by the Anopheles mosquito, a period of time (the “incubation period”) goes by before the first symptoms appear. The incubation period in most cases varies from 7 to 30 days. The shorter periods are observed most frequently with P. falciparum and the longer ones with P. malariae.

Antimalarial drugs taken for prophylaxis by travelers can delay the appearance of malaria symptoms by weeks or months, long after the traveler has left the malaria-endemic area. (This can happen particularly with P. vivax and P. ovale, both of which can produce dormant liver stage parasites; the liver stages may reactivate and cause disease months after the infective mosquito bite.)

Such long delays between exposure and development of symptoms can result in misdiagnosis or delayed diagnosis because of reduced clinical suspicion by the health-care provider. Returned travelers should always remind their health-care providers of any travel in areas where malaria occurs during the past 12 months.

The classical (but rarely observed) malaria attack lasts 6–10 hours. It consists of 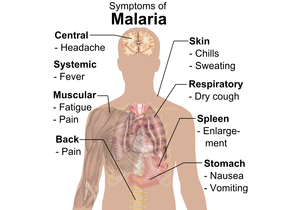 More commonly, the patient presents with a combination of the following symptoms:

In countries where cases of malaria are infrequent, these symptoms may be attributed to influenza, a cold, or other common infections, especially if malaria is not suspected. Conversely, in countries where malaria is frequent, residents often recognize the symptoms as malaria and treat themselves without seeking diagnostic confirmation (“presumptive treatment”).
Physical findings may include the following:

Diagnosis of malaria depends on the demonstration of parasites in the blood, usually by microscopy. Additional laboratory findings may include mild anemia, mild decrease in blood platelets (thrombocytopenia), elevation of bilirubin, and elevation of aminotransferases.

Severe malaria occurs when infections are complicated by serious organ failures or abnormalities in the patient’s blood or metabolism. The manifestations of severe malaria include the following:

Severe malaria is a medical emergency and should be treated urgently and aggressively.

In P. vivax and P. ovale infections, patients having recovered from the first episode of illness may suffer several additional attacks (“relapses”) after months or even years without symptoms. Relapses occur because P. vivax and P. ovale have dormant liver stage parasites (“hypnozoites”) that may reactivate. Treatment to reduce the chance of such relapses is available and should follow treatment of the first attack.

Other Manifestations of Malaria

Neurologic defects may occasionally persist following cerebral malaria, especially in children. Such defects include trouble with movements (ataxia), palsies, speech difficulties, deafness, and blindness.
Recurrent infections with P. falciparum may result in severe anemia. This occurs especially in young children in tropical Africa with frequent infections that are inadequately treated.
Malaria during pregnancy (especially P. falciparum) may cause severe disease in the mother, and may lead to premature delivery or delivery of a low-birth-weight baby.
On rare occasions, P. vivax malaria can cause rupture of the spleen.
Nephrotic syndrome (a chronic, severe kidney disease) can result from chronic or repeated infections with P. malariae.
Hyperreactive malarial splenomegaly (also called “tropical splenomegaly syndrome”) occurs infrequently and is attributed to an abnormal immune response to repeated malarial infections. The disease is marked by a very enlarged spleen and liver, abnormal immunologic findings, anemia, and a susceptibility to other infections (such as skin or respiratory infections).

^Malaria (article) is provided for informational purposes only. No expressed or implied warranties as to the validity of content.
WikiMD is not a substitute for professional advice. By accessing and using WikiMD you agree to the terms of use.
Templates etc. when imported from Wikipedia, are licensed under CC BY-SA 3.0. See full disclaimers.
Retrieved from "http://www.wikimd.org/wiki/index.php?title=Malaria&oldid=2069073"
Categories: